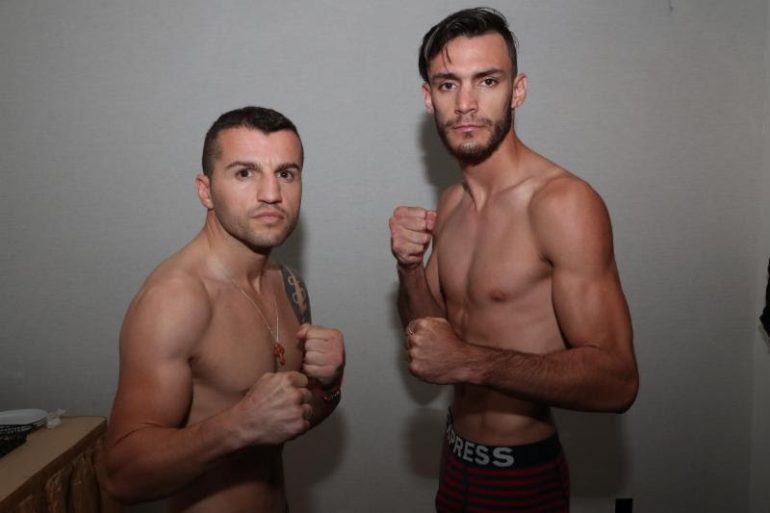 NEW YORK – Dejan Zlaticanin had hoped New York would be the place of his career rebirth. Instead, it may be where it ended.

The 34-year-old from Montenegro suffered a stunning setback to his career Thursday night against Roberto Ramirez, getting dropped twice in the second round before the referee waived the fight off at the 2:32 point in the Broadway Boxing preliminary fight.

Zlaticanin (23-2, 16 knockouts), a former WBC lightweight titleholder, was fighting for the second time since being knocked cold by Mikey Garcia in early 2017, and was working for the second straight outing with new trainer Buddy McGirt.

Ramirez (18-2-1, 13 KOs) walked into the Melrose Ballroom in Astoria, Queens with little to lose, having fallen short against Carlos Ocampo and Abel Ramos when he stepped up in class. The 25-year-old from Tijuana, Mexico utilized a game plan not dissimilar from Garcia’s, walking the shorter man into uppercuts which rocked Zlaticanin early.

Zlaticanin, 34, suffered a broken jaw in that first round, plus a broken nose which led to him being hospitalized later.

An uppercut followed by a right hand put Zlaticanin down early in the second, then another right hand spun Zlaticanin into the ropes in a manner similar to the combination Garcia threw which preceded the knockout. Just as the fight was getting out of hand, Zlaticanin threw a pair of left hands which wobbled Ramirez in close and nearly dropped him.

Just as he was back in the fight, the referee called time in a clinch and brought the doctor into the corner to check on Zlaticanin’s nose. The fight continued, and Ramirez resumed his target practice session, capping off a rally of right hands with an uppercut that finished the fight.

“Maybe that Mikey Garcia fight took more out of Dejan than we thought,” said promoter Lou DiBella. Right now I’m just worried about Dejan healing and recovering, I’m not even thinking about boxing.

“That was a pretty savage beating and you just want him to recover physically and then he’s got to think about things.”

DiBella had other things to rejoice about, particularly in the main event.

Mikkel LesPierre (20-0-1, 9 KOs) put together his most impressive performance to date as a professional, dropping Gustavo Vittori (20–41, 11 KOs) three times before scoring the technical knockout 38 seconds into round 7.

Typically a pure boxer, the southpaw from East Flatbush, Brooklyn, showed a withering body attack which produced each knockdown, plus a killer instinct to finish off the Argentinian once he was hurt.

DiBella says it was the best he’d seen the 33-year-old look.

“Tonight I saw a fighter who can compete at the top level,” said DiBella, whose dream matchups for LesPierre are against WBC junior welterweight titleholder Jose Ramirez and unbeaten prospect Alex Saucedo.

“This is a guy that if you bring him to New York, a fight at The Garden, a fight at the Barclays Center, he’s a guy that can challenge somebody at 140 and also bring a crowd.”

“I wanted to put on an entertaining fight and win by any means against a gritty opponent and show I had the skill and determination to win, and I think I did just that,” said LesPierre, a popular ticket seller who brought a number of fans across the BQE.

Mikkel LesPierre (20-0-1, 9KOs) bombs Gustavo Vittori to the canvas for a third time in round 7 to win by TKO. #boxing pic.twitter.com/bMEx6pg5dg

Earlier in the night, Raquel Miller (6-0, 3 KOs) shined against “Sunset” Szilvia Szabados (17-12, 8 KOs) of Hungary, showing offer her boxing skills and physical strength in a 60-54 shutout across three scorecards in the middleweight bout.

It was Miller’s first fight under DiBella Entertainment, and the New York promoter is eager to see Miller face off with her former amateur rival Claressa Shields as a pro.

“I think Raquel is the girl who has the goods to beat Claressa. That’s no disrespect Claressa, but nobody’s unbeatable and nobody is the greatest of all-time yet,” said DiBella.

Jude Franklin (8-0, 7 KOs) of the Bedford Stuyvesant section of Brooklyn remained unbeaten in his featherweight fight, dropping Angel Aguilar (8-14, 1 KO) on a jab in the fourth and pummeling the Mexican fighter into remaining in his corner after the fourth round.

There’s always room for improvement but I felt great in there, and I felt strong in there,” said Franklin, a 23-year-old who scored a scary second round knockout of Floriano Pagliara in his previous outing.

“I want to show the fans and critics that I’m an all-around fighter. I’m not just a one-dimensional fighter, I can use my jab, I can box when I want to, I’m a power-puncher. I want to show that I have all these tools to become a complete fighter.”

Alicia Napoleon, the WBA female super middleweight titleholder, had been set for a non-title fight against Vashon Living, but was left disappointed when Living didn’t show up at the weigh-in.