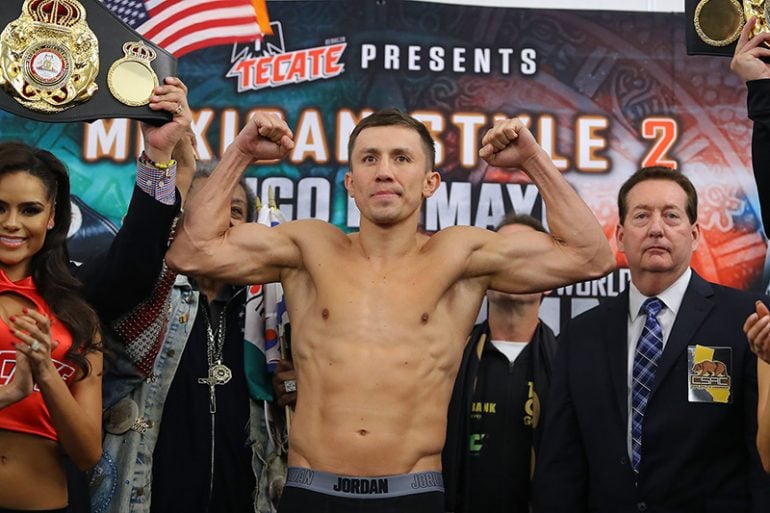 LOS ANGELES — The last time Gennady Golovkin met with the media at The Palm, nothing was announced. It was, literally, a press conference to announce nothing.

That was in April, weeks after GGG and his team were left scrambling to find a replacement opponent for May 5. The foe, of course, was supposed to be Canelo Alvarez, but the Mexican star tested positive for clenbuterol and subsequently was suspended six months.

Golovkin’s trademark mega-watt smile wasn’t on display that day, but it was back and wider than ever on Monday. Now, a jovial Golovkin not only has his chance to exact revenge on Canelo after the rematch was consummated last week following an arduous negotiation, but GGG also owns solace in the fact he stood his ground and grabbed a 45% purse split this time.

Golovkin (38-0-1, 34 knockouts) demanded parity after accepting 30% to Canelo’s 70 for their first meeting in September that ended in a hotly disputed draw. But now, he’s set to earn far more money, and he’s motivated to knock Canelo out. The pleasantries that GGG usually offers up about his foes are out the window, and the bad blood brewing is genuine.

“I don’t know how much; it’s a lot,” Golovkin said when asked how much respect he’s lost for Canelo since the positive drug test was revealed, an adverse finding Alvarez blamed on contaminated meat consumed in Mexico. ” … He’s a completely different guy. He’s not sportsman.” 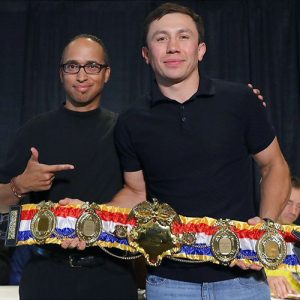 When the news conference was planned last week, the fight hadn’t even been made. Heck, Golovkin wasn’t even in the U.S., but in Russia for the opening ceremonies of the World Cup. When GGG returned, promoter Tom Loeffler wanted to hold a ceremony so RING editor-in-chief Doug Fischer could present him with the publication’s pound-for-pound championship, recognition of the 36-year-old’s status atop the mythical list.

While the pound-for-pound rankings have been in place for years, the belt hasn’t been around since Roy Jones Jr. wore it in the early 2000s.

The Kazakh native now living in Santa Monica will look to add another RING title to his collection during his encore encounter with Alvarez, which will likely be for the vacant middleweight championship.

Golovkin couldn’t hold back his distaste for Alvarez during the event, even though he was far more subdued than in March, when he excoriated the 27-year-old and even said he noticed injection marks on his arms before their first bout.

“I don’t think anything about him as a human being,” Golovkin later said Monday, this time with the assistance of a translator. “I’m not really concerned about him. I just hope that he will be there come Sept. 15 to fight. I’m always motivated. I’m the champion. It is him who has to be motivated because he has to prove himself.

Abel Sanchez, who trains Golovkin at his compound in Big Bear Lake, California, was dismissive of Canelo’s propensity to box rather than engage, and even more critical of what he sees as a personality transformation.

“He was in my training camp probably about six years ago, and he spent three different training camps there, and as Gennady was just saying, he’s a different kind of person,” said Sanchez, who oversaw sparring sessions between Alvarez and GGG at the time. “He was a very humble, very nice kid. It seems that today his riches have made him a new person.

“He’s a very good fighter — an exceptional fighter — he’s doing a lot for boxing in Mexico, but as fast as he went up, you can go back down, and all the people that you stepped on on the way up you’re going to meet on the way down.”

Sanchez says it’s “not hate” they’re feeling toward Canelo, but admitted there’s definitely “bad blood because of what he’s put us through. There is some wrongs that need to be righted, and they will be on the 15th.”

When one reporter asked Golovkin how happy he would to knock Canelo out, his eyes lit up, and there was that magnetic smile again. Golovkin was already vexed when, in his mind, he was robbed of a clear decision victory. When he found out about the positive PED test, his anger grew to atomic levels, but as he seethed, he plotted, and dreamed of the chance to put hands on Canelo once again.

Canelo faced the media after the positive drug test and explained his story, in addition to offering a heartfelt apology. He’s been missing from the public eye ever since.

There apparently will be no joint press conference to officially kick off the promotion for the rematch, and there’s rumors that Canelo refused to participate in the usual HBO Face Off with GGG this time around.

“I think he simply can not look into my eyes. That’s all,” Golovkin said. “Because he knows that I’m correct in everything [I’ve said.]”