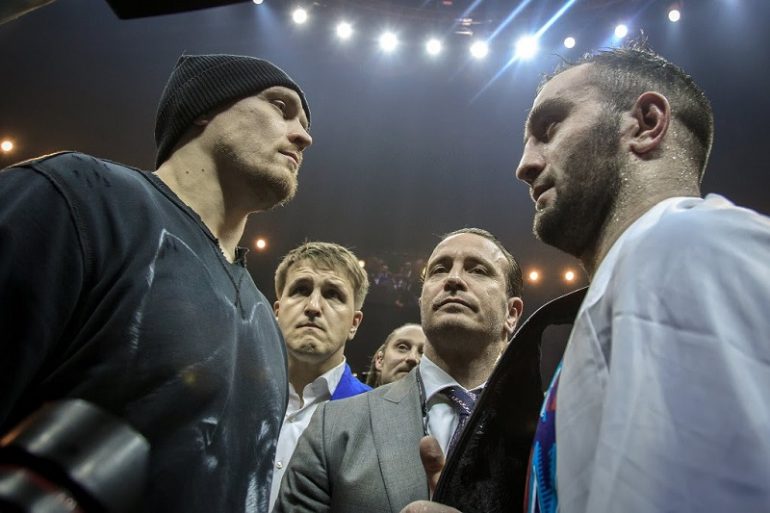 At long last, we have a date and location for the World Boxing Super Series cruiserweight final.

Oleksandr Usyk and Murat Gassiev will meet in a highly anticipated battle on July 21 in Moscow, a source with knowledge of the deal told THE RING. The fight, which will crown a new RING cruiserweight champion, was originally scheduled for May 11 in Jeddah, Saudi Arabia, but Usyk, 31, suffered an elbow injured and was unavailable.

The 200-pound matchup is the culmination of a single-eliminator tournament that began in September with Usyk’s 10th-round stoppage of former champion Marco Huck. Gassiev scored a third-round knockout of ex-titleholder Krzysztof Wlodarczyk one month later, and just as planned, the top two seeds were on a collision course.

Usyk (14-0, 11 knockouts) followed up with a majority decision victory over Mairis Briedis in January, and Gassiev took care of business with a 12th-round knockout of Yunier Dorticos one week later, setting up the cruiserweight summit meeting.

Usyk, an Olympic gold medalist who hails from Ukraine, is unusually fleet of foot for a man of his stature, creating a tremendous clash of styles in the finals. Gassiev prefers to stalk, plant his feet and bang home power shots, and when they land, they’re devastating.

The 24-year-old Russian is a training partner of Gennady Golovkin, and under the tutelage of Abel Sanchez, he’s developed into one of the most fearsome punchers in the sport. But he’ll have to deal with the awkwardness of Usyk, a crafty southpaw who is THE RING’s No. 10 pound-for-pound fighter.

It’s widely expected the winner will eventually move up to heavyweight, adding an elite fighter to a mix that includes Deontay Wilder and Anthony Joshua.