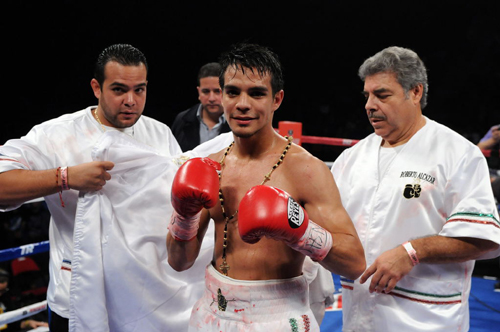 In a rare instance of two ranked fighters under the same promotional banner facing off, the 10-round junior welterweight bout will take place at the Auditorio del Estado in Mexicali, Mexico.

beIN Sports will broadcast the fight in the United States (11 p.m. ET/ 8 p.m. PT), along with Azteca TV in Mexico.

Zepeda (28-1 1 NC, 23 knockouts) has not fought since November 4, when he stopped former fringe contender Abner Lopez in the sixth round. The southpaw has won his last five bouts.

The 29-year-old Zepeda, who resides in the Los Angeles suburb of La Puente and trains in Las Vegas, has moved on from a freak accident in his only attempt at a world title belt (against Terry Flanagan) almost two years ago. Zepeda had to retire on his stool after the second round after dislocating his left shoulder.

Zepeda is ranked No. 6 by the WBO.

The 23-year-old Diaz, who resides in Guadalajara, Mexico, is ranked No. 3 by the WBO and No. 9 by the WBA. He has victories over fringe contenders Roberto Marroquin, Miguel Beltran and Braulio Rodriguez.

Both Zepeda and Diaz have been staples on Zanfer Promotions cards throughout Mexico and a victory could position themselves toward a world title opportunity later this year.

Quirino (19-2-2, 9 KOs) notched the biggest victory thus far in his career in his last bout, stopping former world titleholder Hernan ‘Tyson’ Marquez after the ninth round on Apr. 21.

Sandoval (28-3, 19 KOs) has also compiled a long winning streak, having won his last 16 bouts, albeit against less than stellar opposition. Two of those 16 victories have come against fighters with winning records.

Both Quirino and Sandoval reside in the Tijuana area.

Francisco A. Salazar has written for RingTV.com since October of 2013 and has covered boxing in Southern California and abroad since 2000. Francisco also covers boxing for the Ventura County (Calif.) Star newspaper, RingTV.com, and FightNights.com. He can be reached by email at [email protected] or on Twitter at FSalazarBoxing