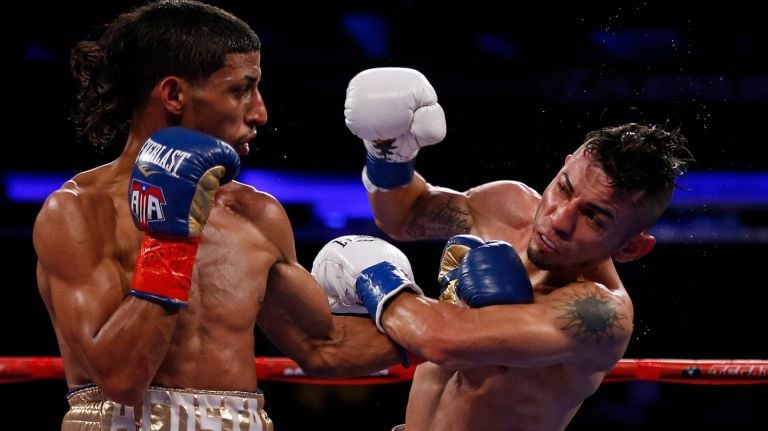 Acosta (17-1, 17 knockouts) had been due to appear on Miguel Cotto’s last hurrah, in December, in a stay-busy fight. However at late notice, when then-titlist Kosei Tanaka – the only man to beat the Puerto Rican – vacated, Acosta’s fight with Juan Alejo was upgraded to fill the vacancy and Acosta stopped the Mexican in 10 rounds.

“It was a privilege and a honor for me to win my title on the same night that the legend of my friend and promoter (Cotto) finished his brilliant career. It felt special.” Acosta told THE RING in early June.

The 27-year-old has been preparing for his first defense in his hometown of San Juan, as well as a half-hour away at Cotto’s facility, in nearby Caguas. In total Acosta has had a nine-week training camp to ready for the challenge of Buitrago.

Buitrago (30-3-1, 17 KOs) has been a professional for 10 years despite only being 26 years old. Much of the young veteran’s career has taken place in his native Nicaragua. He’s 0-3-1 in world title fights, was stopped in his most recent fight, last December, and will be a dangerous opponent for Acosta.

“I am very excited to make my first defense in Puerto Rico against a top challenger like Carlos Buitrago,” said Acosta. “He has world title experience and a great style that will bring action to the fight. He is a tough fighter with great skills; his style goes along with mine. This will be a toe-to-toe fight.

“This will be his fifth world title try. He’s always given a good account of himself but he’ll likely be desperate to win this fight. Everybody deserves the chance because he has worked hard but he will fail again with his world title dreams.”

Although Cotto brought the curtain down on his surefire Hall of Fame career, last year, it was a banner year for his promotional company Promociones Miguel Cotto, which produced its first two world champions, Acosta and Alberto Machado, who claimed the WBA junior lightweight title last October.

Cotto believes Acosta has all the prerequisites to capitalize on his world title win.

“He has the talent and strength to make all his dreams come true,” Cotto said. “He needs to keep focused and working hard. He has everything to succeed.”

Integrated Sports Media will distribute the La Batalla: Acosta vs. Buitrago card in the United States on cable, satellite and digital pay-per-view, via iN Demand, Vubiquity, DIRECTV, DISH and live-streamed worldwide (excluding Puerto Rico) on the FITE.TV app and website (www.fite.tv), starting at 9 p.m. ET / 6 p.m. PT, for a suggested retail price of only $34.95.