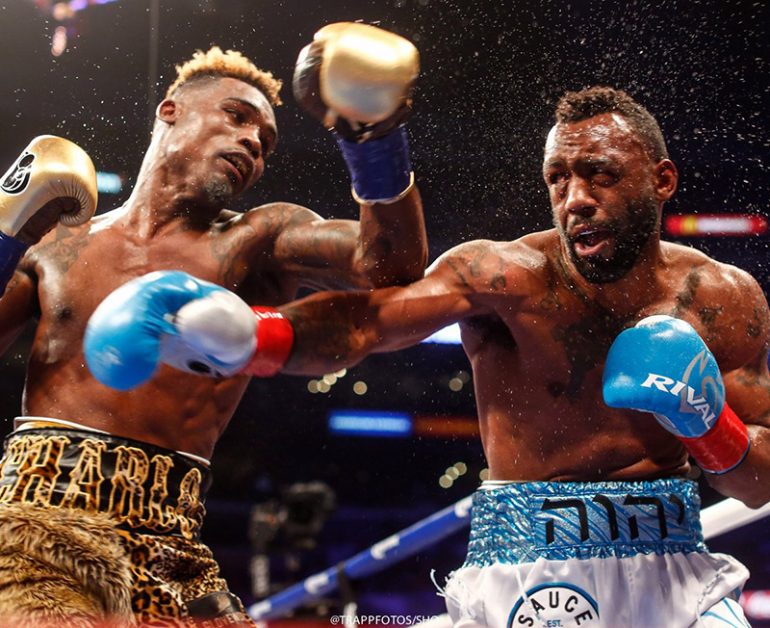 LOS ANGELES — Jermell Charlo took care of business against Austin Trout, but just like when his twin brother, Jermall, faced the southpaw veteran, he couldn’t obtain the victory inside the distance.

Trout wasn’t competitive with Charlo, but the former junior middleweight titleholder still has enough craftiness and guile to hang in there, even when he’s outgunned physically. Charlo scored two knockdowns, but he never stepped on the gas enough to finish Trout off, and with it, his perfect knockout streak concluded.

Charlo (31-0, 15 knockouts) settled for a majority decision to retain his WBC junior middleweight title via scores of 113-113, 115-111 and 118-110 on Saturday at Staples Center. THE RING also had it 118-110, and even even Trout appeared surprised when the even tally was announced by ring announcer Jimmy Lennon Jr.

With Trout (31-5, 17 KOs) out of the way, Charlo will look ahead to a possible unification fight with Jarrett Hurd, who owns two 154-pound titles after consecutive victories over Trout and most recently, Erislandy Lara.

It’s the type of fight that could land Charlo on the pound-for-pound list with a victory, an honor he so badly wants.

“Trout will tell you who will win that fight,” said Charlo, who’s made three defenses of the title he won with a knockout of John Jackson, including a sixth-round KO of Charles Hatley and a first-round vanquish of Erickson Lubin last year. “Trout moved, that’s why he survived 12. If Hurd sat in front of me and took those shots, he’s done.

“I went to fish, I tried to get some Trout but I couldn’t catch him on the hook. I know they’re used to seeing me knock boys out but at least they saw me take care of business. I already knew Trout was going to come in and try to survive. Trout wasn’t going down like that. He’s a veteran, he’s a real fighter, but I don’t know what the judges were looking at. I won that fight. Sometimes you knock them out, sometimes you just beat them.”

Charlo is a much-improved fighter from the one who was dropping rounds to Jackson in May 2016. He’s quicker with his counters now, his timing is better and he’s simply more confident. But he’ll need to be better than he was Saturday if he wants to upend Hurd.

The 28-year-old from Houston, who splits his time in Los Angeles, hurt Trout numerous times in the fight. He scored a knockdown in Round 3 with a flush right cross followed by a grazing left hook. Charlo fought aggressively in spurts and placed the 32-year-old southpaw on the canvas again in Round 9, but Trout was able to stave him off with timely jabs combined with right hands to the midsection.

He even stunned Charlo with an one-two that knocked the champ off balance in Round 6. Still, it was a fight mostly devoid of action, and the contingent on hand to see Leo Santa Cruz battle Abner Mares in the Showtime main event lustily booed.

Trout’s 2012 victory over Miguel Cotto remains the signature victory of his career, but following a fourth consecutive defeat in a title fight, he appears finished as an upper-echelon fighter. The Las Cruces, New Mexico, native suffered the first knockout loss of his career in October, when he met Hurd in a brutal fight.

“That’s a damn good fight, Charlo can crack and Hurd is resilient — I know I’ll be tuned in,” said Trout, THE RING’s No. 7-ranked junior middleweight. “… Take those knockdowns away, I won the fight. I can’t make any excuses, the better man won with those knockdowns.

“Both Jermall and Jermell are really good. They are the future. But I’m not done yet. I’m not defined by my results. I’m defined by the risks that I take. I’ve taken the risks and I’ve stood my ground every time against giants and killers. And I’m still here.”

The Charlos might be the future of the sport, with their tremendous charisma and potent punching power inside the ring. They’re also the present.

Now, they just need to secure fights with the proper opponents to climb another rung on the ladder to stardom. Hurd waits in the wings.