Tyson Fury wins comeback bout against Sefer Seferi in farce, but what did we really learn? 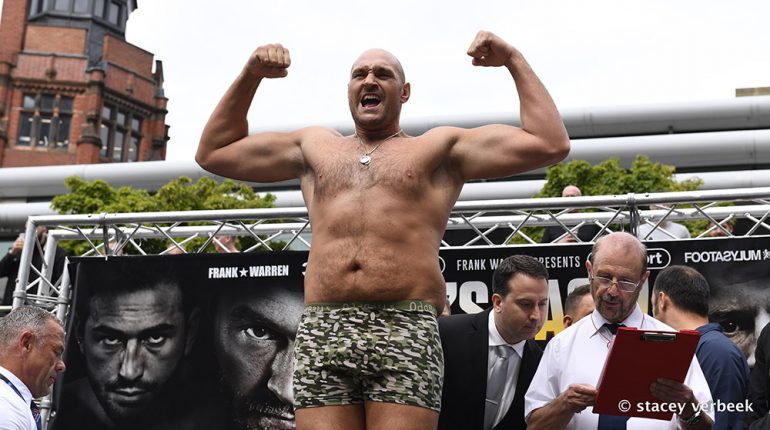 The charismatic big man soaked it all in as he strutted to the ring Saturday for the first time in two-and-a-half years. Fury already overcame a battle with cocaine addiction, and he’s now, by all accounts, flourishing in his ever-going fight with mental illness.

As Mark Morrison’s classic “Return of the Mack” blasted over the speakers, Fury danced and crooned for the crowd at Manchester Arena. The heavyweight division — heck, boxing — needs Fury when he’s at his best, but we really didn’t learn much from his comeback fight with Sefer Seferi.

Fury (26-0, 19 knockouts) joked around with Seferi at Friday’s weigh-in and even picked up the longtime cruiserweight with both arms, cradling him like a baby. The 39-year-old Swiss was a willing participant and played along with the fun. When it was time to fight, neither guy seemed too interested.

Fury, down to 276 pounds from about 350, but still woefully out of shape, performed the Ali shuffle, taunted Seferi (23-2, 21 KOs) and even made sure to watch a scrap that broke out in the crowd. He threw nary a punch until Round 3, when he connected on a few jabs. After he landed a tremendous right uppercut in Round 4, that was it.

We’d see no more from Fury — or Seferi, thankfully. The sham was over after Seferi retired in his corner, arms draped over the ropes, staring out at the crowd, as he told his corner he’d had enough and the referee halted the bout.

It’s a fourth-round stoppage victory for Fury, who remains the lineal heavyweight champion dating back to his first fight before the layoff, an upset decision victory over future hall of famer Wladimir Klitschko.

At 29 years old, Fury has a chance to make plenty of noise. But it was impossible to tell just how much he has left during what amounted to a four-round carnival exhibition.

At his best, Fury was incredibly awkward to fight. He’s a mountain of a man at 6-foot-9, and he’s surprisingly nimble on his feet. He possesses a nice jab and he owns the requisite tools to box.

A fight with either Deontay Wilder or Anthony Joshua would represent a massive event. If we’re unsure exactly how well Fury can fight in his current state, there’s no doubting his showmanship and ability to sell an event.

His personality is infectious; his jokes timely. But he’s clearly far away from being ready to fight even Dillian Whyte or Joseph Parker, nevermind Joshua or Wilder.

Fury’s new promoter, Frank Warren, will surely line up a few more foes similar to Seferi, small boxers with no reasonable hope of scoring the upset and cancelling plans for a mega fight. At this point, Fury’s team simply can’t chance pitting him against a capable heavyweight.

Maybe, Fury will prove he’s still got it; that the layoff didn’t have irreversible effects on his athletic ability; that he can still fight with the best of them, still confound the best heavyweights with his movement and guile.

It’s an accomplishment that Fury even made it back to the ring. Mental illness is no joke, and it’s great that Fury appears to be enjoying life. He’s already lost a considerable amount of weight, he’s in good spirits and he’s resumed doing what he loves.

Now, we’ll wait to see if Fury can defeat a legitimate opponent, so if and when he does secure a fight with Joshua or Wilder, the public will take him seriously.