And the Best Middleweight in the World Is…? 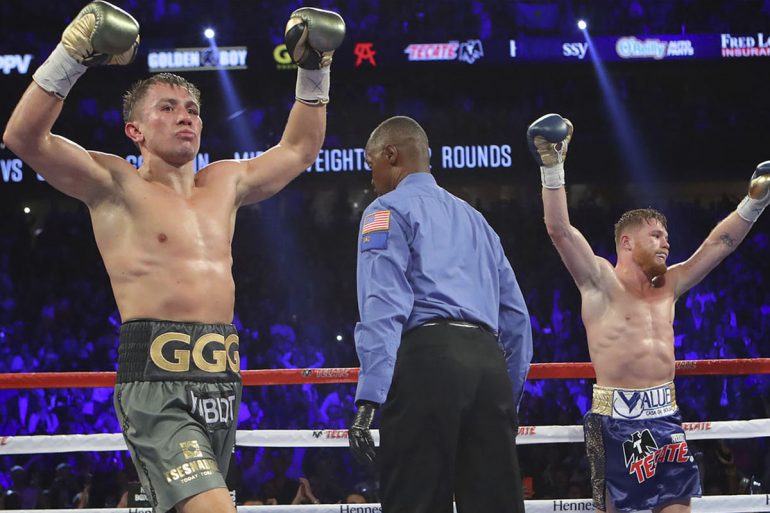 Canelo-GGG 3 is still a fight worth making. Photo by Tom Hogan-HoganPhotos
01
Jun
by Thomas Hauser

Paulie Malignaggi has criticized the various pound-for-pound lists and other rankings we see in boxing today with the observation, “Some guy who doesn’t know his ass from his elbow sits down at a computer eating some donuts and puts fighters in any order he feels like. And the sanctioning bodies are worse. There has to be a better way.”

The Ring has a better way. 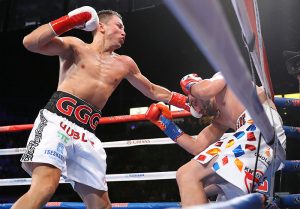 Gennady Golovkin made his fans happy with his two-round demolition of brave Vanes Martirosyan in his most recent fight. Photo / Tom Hogan-HoganPhotos / GGG Promotions

The best middleweight in the world right now is Gennady Golovkin. That’s the consensus opinion of 24 experts who were asked what would happen if the top seven middleweights in boxing faced off against one another in a round-robin tournament. Canelo Alvarez finished in the No. 2 slot.

In reality, a tournament of this nature could never happen. It would require unmakable matches and 21 separate fights. But two dozen of the most knowledgeable people in boxing agreed to predict the outcome of these hypothetical fights.

The electors brought varying perspectives to their task.

Some are former fighters (Kelly Pavlik, Gerry Cooney, Paulie Malignaggi). Others are trainers (Teddy Atlas, Pat Burns). Pavlik has a special association with the middleweight division, having reigned as middleweight champion for 32 months. So does Burns, who trained former 160-pound champion Jermain Taylor during Taylor’s glory years.

The media was represented on the panel by Al Bernstein, Harold Lederman, Brian Kenny, Dan Rafael, Ron Borges, Norm Frauenheim, Michael Rosenthal, Tom Gerbasi, and Randy Gordon. As a special addition to the media group, we added Michael Buffer, who has an in-depth knowledge of boxing and has seen his share of fights. 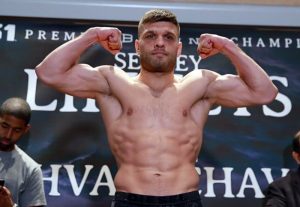 Sergiy Derevyanchenko is the least known of the middleweight standouts, which didn’t help him in our poll but may add to his threat level in actual fights. Photo courtesy of Premier Boxing Champions

Two electors said that they hadn’t seen enough of Sergey Derevyanchenko to feel comfortable predicting the outcome of his fights. A weighted average of the other electors’ picks was used to fill in that line on their ballots. Also, Ron Katz said that, because he has an ongoing relationship with Demetrius Andrade, it would better to use a weighted average to fill in that line on his ballot to avoid claims of favoritism.

One matchmaker who participated in similar polls in the past declined to participate this time and wrote, “I appreciate the idea behind your poll and I appreciate being included with this super-talented group, each of whom I hold in the highest regard for their boxing knowledge. But I have no interest in making any judgment on these matches when I strongly believe that more than just Canelo have boosted their capabilities through modern chemistry. I hate the fact that there are so many fighters at or near the top of the rankings that are not playing the sport fair. It is so widely known in the boxing community, and I am sure that I don’t know a fraction of the number involved.”

As noted above, there were 21 separate fights in the hypothetical tournament and 24 electors. This means that 504 predictions were entered into the data base. Fighters were awarded one point for each win and a half-point for each draw (too close to call).

A perfect score (each elector predicting that the same fighter would win all six of his fights) would have been 144 points. No one came close to that outcome. But in the end, a clear consensus emerged.

The order of finish and point totals are: 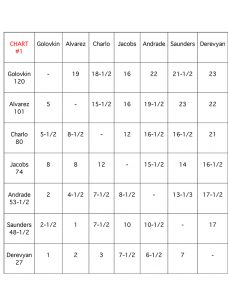 Chart #1 shows a breakdown of the electors’ predictions with regard to individual match-ups.

Nineteen of the 24 panelists picked Gennady Golovkin to beat Canelo Alvarez should they fight again, which may or may not happen on September 15. If that fight falls though, Golovkin vs. Sergey Derevyanchenko (the rumored alternative for Gennady) is far less attractive since Derevyanchenko finished last in the balloting.

One of the remarkable things about the balloting was that six of the seven fighters had at least a share of first place on one or more ballots.

Thirteen electors had Golovkin alone in first place, while one had Gennady in a tie with Billy Joe Saunders and another had him tied with Demetrius Andrade. Andrade finished alone at #1 on another ballot. Jermall Charlo finished in first place on four ballots. Canelo Alvarez and Danny Jacobs each finished in the top spot on two ballots.

As shown in Chart #2, there was consistency among the electors when viewed as separate groups. 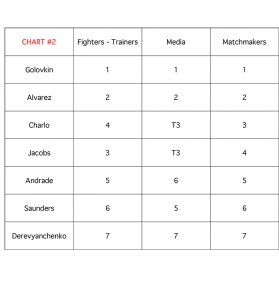 Fighters/trainers, media, and matchmakers all ranked Golovkin No. 1, Alvarez No. 2, and Derevyanchenko No. 7. There were minor differences with regard to the ranking of the other four fighters.

Jermall Charlo was the wildcard in the proceedings. Among the thoughts offered by electors were:

*         “Charlo has the look but he’s winning against low-level opposition. Let’s see how he does against better fighters.”

*         “Charlo might be the best of the bunch, but there’s a big question. We know he can give it. We don’t know yet if he can take it. And some of the guys on this list would make him take it.”

One of the biggest problems boxing has today is that championships have been devalued. There are too many sanctioning bodies giving out too many belts. For boxing to be healthy, the public has to understand who the best fighters are. In other words: “Who’s No. 1?”

Right now, the No. 1 middleweight in the world is Gennady Golovkin.