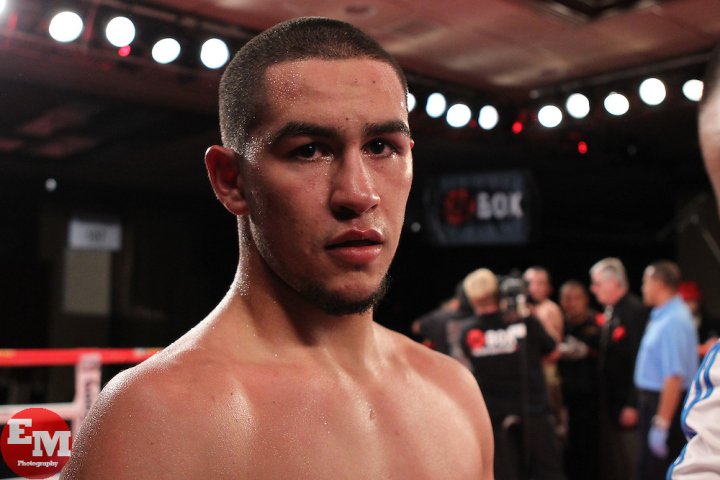 Javier Molina
31
May
by Francisco Salazar

Javier Molina and Jessie Roman have known each other since their amateur days and the two Southern California fighters have grown to become acquaintances over the years, occasionally sparring each other in preparation for fights.

However, all camaraderie will be thrown out the window Friday night when the two junior welterweights square off in an eight-round bout at the Belasco Theatre in Los Angeles.

The fight will headline a three-bout telecast that will air live on Estrella TV and RingTV.com (10 p.m. ET/ 7 p.m. PT).

The 28-year-old Molina (17-2, 9 knockouts) has been the least active of the two. Since losing a 10-round unanimous decision to Jamal James in January 2016, Molina, who resides in the Los Angeles suburb of Norwalk, has not had a single fight.

But the 2008 U.S. Olympian still believes he has the skillset to emerge victorious.

“Jessie Roman has be in tough fights but on June 1, he will face his biggest challenge yet,” said Molina, whose twin brother Oscar is also a professional. “I’m not nervous to be in the main event. This is my town and Jessie Roman and I are still going to be able to shake hands.

“This is a tough business, but at the end of the day, that’s all it is.”

Roman (22-3, 11 KOs) may not have Molina’s Olympic pedigree, but he has built a modest record over his eight and a half year pro career.

In his last bout, on June 23, Roman forced Erick Daniel Martinez to retire at the end of four rounds, and the 27-year-old prospect has won five of his last six bouts.

Roman believes the familiarity of knowing one another, inside and outside the ring, will be to his advantage.

“We were in the amateurs together,” said Roman, who has lost to Eddie Ramirez and unheralded Joaquin Chavez. “We sparred each other for a couple of rounds. I’m fully aware of what I’m facing. This is my opportunity to show everyone what I’ve got.”