Naoya Inoue brutally stops Jamie McDonnell in one round 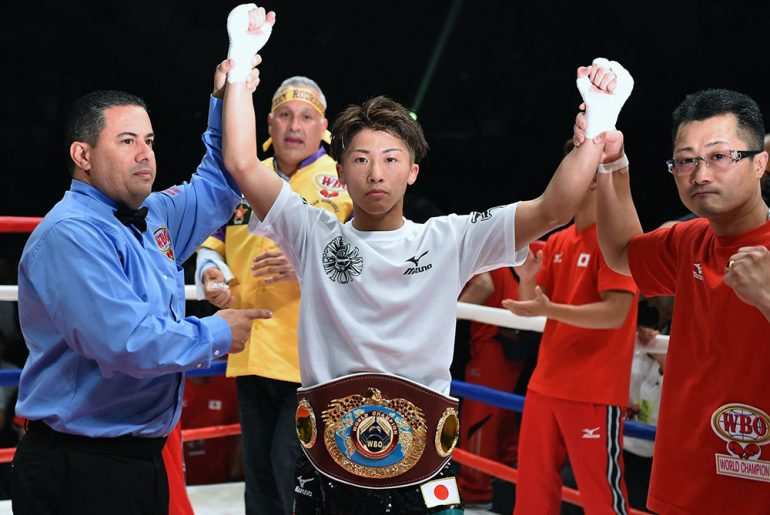 Naoya Inoue. Photo by Naoki Fukuda
25
May
by Tom Gray

In his 118-pound debut, pound-for-pound sensation Naoya Inoue blasted his way through Jamie McDonnell in a single round, handing the Englishman his first defeat in over a decade. The bout was scheduled for 12 and took place at the Ota-City General Gymnasium in Japan.

Inoue, a former world titleholder at 108 and 115 pounds, displayed his power with the first combination he threw and McDonnell felt the weight of the blows. Moments later, a quick left hook landed high on the head, robbing the Englishman of his equilibrium, and a right hand-left hook to the body dropped him. The visitor rose gamely but a brutal follow up attack forced Luis Pabon to call a halt as McDonnell hit the canvas again. The official time was 1:52.

It’s highly likely that Inoue now moves on to the next World Boxing Super Series which is bursting at the seams with elite-level bantamweights. However, despite the fact that world titleholders Zolani Tete, Ryan Burnett and Emanuel Rodriguez will be taking part, expect the fearsome Inoue (16-0, 14 knockouts) to be installed as favorite should be enter.

The 32-year-old McDonnell, who entered the bout rated No. 2 by THE RING at bantamweight, has repeatedly spoken about moving up to 122 pounds. He has claimed British, Commonwealth, European and world honors at 118 and there are no more dragons left to slay at the weight. Rolling the dice at junior featherweight is definitely an option.

Editor’s Note: Victory sees Inoue claim a version of the WBA bantamweight title which is unrecognized by THE RING. Ryan Burnett is the WBA titleholder at 118 pounds.

On the undercard, Ken Shiro retained his WBC junior flyweight title with a stunning second-round knockout of Ganigan Lopez in a rematch. A single right hand to the body from the unbeaten Shiro floored the Mexican contender for the count. The official time was 1:58.