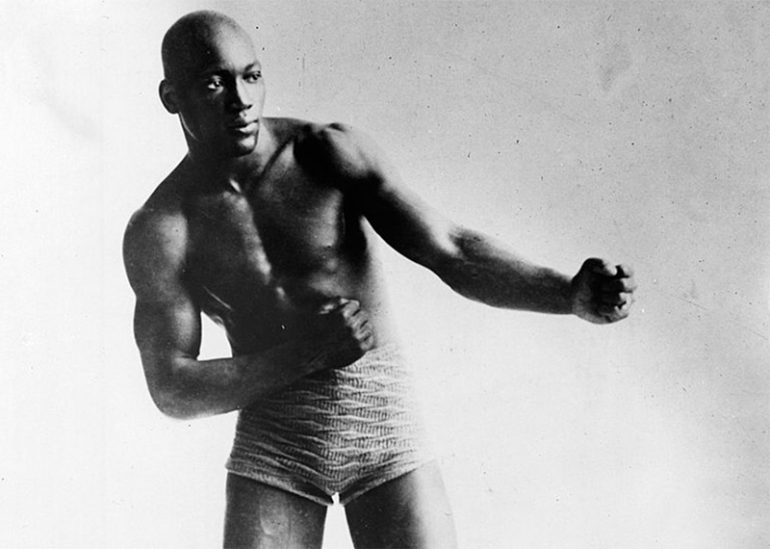 24
May
by Mike Coppinger

Finally, Jack Johnson has secured some measure of justice, nearly 72 years after his death.

President Donald Trump issued a posthumous pardon for Johnson on Thursday at the Oval Office, reversing a 1913 conviction for violating the Mann Act. The first African-American heavyweight champion of all time was convicted of transporting a white woman across states lines for immoral purposes, even though the person in question was Lucille Cameron, who later became his wife.

But the all-time great heavyweight was a lightning rod, a black athlete who dated white women and taunted his opponents.

For years, politicians and celebrities alike have lobbied to have Johnson pardoned. After all, his arrest is seen as a gross civil rights violation, and his pardon is a victory for social equality at a time when there’s so much turmoil in the U.S. in regard to race relations.

“I believe Jack Johnson is a worthy person to receive a pardon, to correct a wrong in our history,” said Trump, who referred to Johnson as “a truly great fighter” who “had a tough life.”

Johnson (56-11-8, 35 knockouts) served nine months in federal prison, much to the delight of the people who wanted to see a white champion. He finally lost his heavyweight championship to Jess Willard in 1915, seven years after he won the crown from Tommy Burns in Sydney, Australia.

The hall of famer fighter is regarded as one of the greatest defensive fighters ever. He was also was one of the first big box-office draws. His 15th-round stoppage of James J. Jeffries in 1910 had a venue constructed specifically for the bout and is one of the first true super fights in boxing history.

“Jack Johnson is a pioneer, not just in this sport, but for African-Americans throughout the country,” said Wilder, who attended the ceremony alongside hall of famer Lennox Lewis, WBC president Mauricio Sulaiman and Sylvester Stallone, who brought the case to Trump’s attention. “The things that he had to endure, made it possible for me and my family to live the lives we lead today. Everything we do in this sport is in honor of the legacy that he left behind.

“In many ways, we’re still fighting that same fight that Johnson fought a century ago. We have to continue to try to speak truth to power and keep pushing towards a better tomorrow despite rhetoric that’s meant to split us apart. Hopefully this pardon is something symbolic that can help unify, but the most important thing we can do is stay engaged every day and live our values so that our culture doesn’t repeat these mistakes.”

Johnson, who died in 1946, was the subject of the critically acclaimed book, Unforgivable Blackness, and also an award-winning documentary of the same name by famed filmmaker Ken Burns.

“It is the right thing to do,” said Burns. “I’m just so happy that Senator John McCain, who has led our efforts to achieve a posthumous pardon for Jack Johnson, has lived to witness this moment. The pardon announced today helps correct an injustice experienced by Jack Johnson.

“But it also reminds us of a racist past and how even today racist remarks and coded words are used to imperil African Americans, especially Black men, and to advance an Un-American agenda.”