Kal Yafai relishing US debut against David Carmona on Saturday 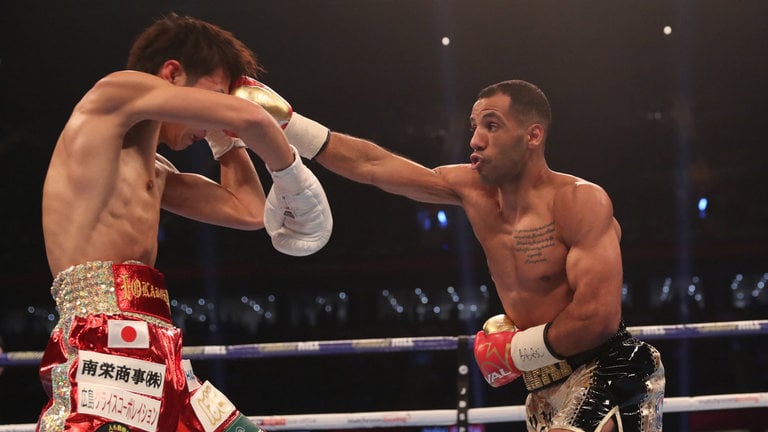 Professional boxing is a tough enough game without being discontent while taking part.

Talented boxer-puncher Kal Yafai has plenty of reasons to be happy. At 28 years old, he’s at the peak of his powers. He’s the reigning WBA junior bantamweight titleholder. He’s unbeaten with 14 knockouts in 23 wins. He’s in a division that is bursting with talent and explosive matchups.

So, what’s the problem?

Well, Yafai, who is rated No. 3 by THE RING at 115 pounds, has boundless ambition but limited patience outside of the ring. The last time we spoke, the Birmingham, England, native was irked by his inability to secure a big fight, and his habitually cool persona was replaced by a depressed demeanor and a lack of motivation.

But all of that is in the past as Yafai is now closing in on his U.S. debut against David Carmona at the Save Mart Arena in Fresno, California, on Saturday. An impressive victory will hopefully be the first step towards an action packed 2018 for the former amateur star.

“I’ve sat down and spoke with (promoter) Eddie (Hearn) and that new deal he has out here in America will give me a lot of options,” said Yafai in relation to Hearn’s billion-dollar deal with streaming giant DAZN. “There are loads of things we can look into after I take care of Carmona.

“There’s been talk of (IBF titleholder Jerwin) Ancajas and (Roman) Gonzalez is still an option. All the fighters (at 115 pounds) are options. Whoever my team thinks is best for me, I’m pretty easy with fighting any of them. Eddie has the big deal out here now, and I think I’ll be fighting more often and – hopefully – we’ll be in the big fights.”

First things first, however, as Yafai has to take care of Carmona. The 27-year-old contender from Mexico City has mixed with the best but fallen short whenever he’s stepped up to top-level.

“Carmona is a decent kid and he’s been in with some good fighters,” Yafai said respectfully. “He has plenty of experience and he’s been around. Fighting me won’t faze him, but I’m looking to put on a good show and do a job on him.

“He’s been the distance with (Naoya) Inoue and (Carlos) Cuadras, and even though he was knocked out by David Lozano, that fight was at (junior featherweight). He can be hurt and he can be knocked out, but I just need to go in there and be clever. I’ll box him early, take what I can, dishearten him and take him out.”

Yafai sounded upbeat and eager to get the job done. An opportunity to showcase his skills in front of a new audience seems to have energized the affable Englishman, and the long trip to California also allowed him to catch up with old acquaintances.

“A couple of days a week, I’ve been doing my basic pads and bags in Box N Burn which are gyms owned by (former Olympic bronze medalist) Tony Jeffries in Brentwood and Santa Monica,” said Yafai. “Tony is a friend of mine and we were on the (Team GB) squad together. It was good to catch up with him and use those facilities. On sparring days, I’ve been training at Robert Garcia’s gym.

“I adapted to the time difference pretty easily because I’m over here a couple of times a year anyway. It’s been great.”

If Yafai performs to the best of his ability, then American fight fans will be clamoring for matchups featuring rival titleholders at 115 pounds. On the undercard, Ancajas defends his belt against Jonas Sultan.

This event will be streamed live by ESPN+ in the U.S. and will be aired on Sky Sports Main Event and Sky Sports Action in the U.K.