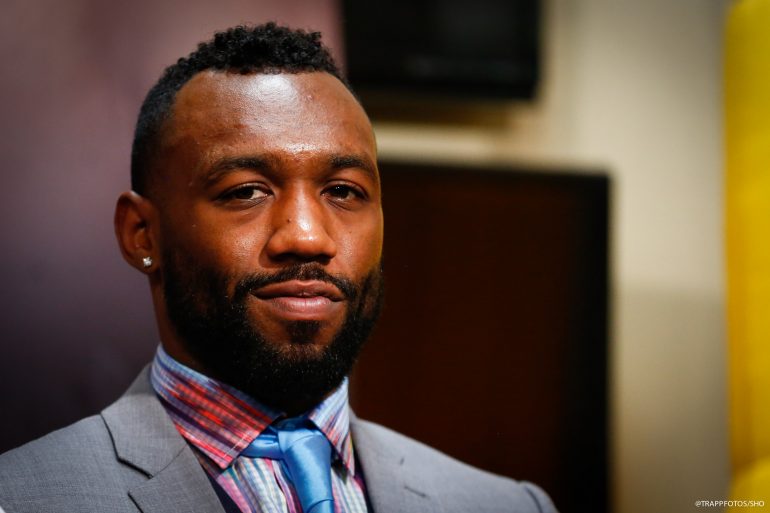 LOS ANGELES — Austin Trout never did get the push.

You know, that ever-humming marketing machine that drives so many fighters to the upper-crust of the sport. It never came for Trout, even after he upset the great Miguel Cotto.

Trout (31-4, 17 knockouts) has scratched and clawed for everything he achieved in boxing. As a young fighter, he wasn’t afforded the benefit of soft matchmaking, the same luxury prospects with big-name promoters enjoy.

So Trout grabbed respect. He did so with a razor-thin decision defeat to Canelo Alvarez. And Trout earned respect with the way he carries himself in and out of the ring. Always in shape, always generous with his time.

Now, he’s been written off once more. The 32-year-old has heard all the whispers that he’s a shot fighter, that he doesn’t deserve to fight for a title yet again (three times in four fights). He promises the criticism will be proven unfounded Saturday when he challenges Jermell Charlo, one of the fastest-rising stars in the sport, for his junior middleweight title at Staples Center on Showtime.

“It’s very aggravating but I’ve been written off my whole career, even as a champion I wasn’t given a chance,” Trout recounted during an interview with THE RING. “I’m not a stranger to this feeling. I’m fighting for the respect that I feel I deserve; not even validation because boxing will never give you validation.

“I gotta put more wins, more belts under my belt, that way my accolades will speak for itself and they will have to give me my respect.”

Trout’s accomplishments over 13 years in the pro game do speak for themselves. The 154-pound southpaw’s victory over Cotto won’t soon be forgotten. Neither will his multiple title defenses. But the Cotto triumph stands as the lone signature victory of Trout’s career.

He parlayed the Cotto victory into a date with Canelo, and he was edged out on the scorecards in a highly competitive fight. In his very next bout, Trout was dominated by Erislandy Lara. Following a handful of fights against limited opposition where Trout rebuilt himself, he was thrust back into a title fight, this time with Jermall Charlo, Jermell’s twin brother.

Trout was outpointed by Charlo, but he troubled him and had more success than any other fighter has against the hard-punching
fighter who is now knocking foes cold at middleweight. He grabbed another title opportunity in his next fight, but was stopped by the monstrous Jarrett Hurd in the 10th round of a grueling affair in October.

“I want to beat up Jermell so bad that Jermall comes back down to ’54 to get that rematch,” said Trout, who fought Jermall in May 2016. “I don’t feel like I lost to him, either.

“Jermall is definitely the bigger, stronger Charlo and I was able to take his best punches. I understand little ‘Mell has been knocking cats out, but they don’t have the chin like me. He hasn’t fought anybody that has the tools like me, the footwork or the head movement. They’re all kind of just standing there.”

It isn’t lost on Trout that he’s the B-side once again, picked to get knocked out by Charlo (30-0, 15 KOs) along the twin’s star climb. But he swears he sees some flaws that can spring the upset. For one, Trout is supremely confident that he’s the smarter fighter, and you’d be hard-pressed to question the veteran’s guile.

He promises that his head movement will provide an unwilling target for Charlo’s devastating power shots, namely the left hook. Trout has no personal disdain for his 28-year-old opponent, but they’re vastly different personalities. There’s Trout, the humble, gracious fighter from Las Cruces, New Mexico, and Charlo, the brash, big-chain wearing upshot from Houston.

“I’m glad that he’s very full of himself, because the good book says pride comes before the fall,” Trout says. “I don’t see him being mentally strong. I think that’s why he’s talking so much. Most people who are very confident don’t have to say much. We’ll give him a piece of humble pie June 9.”

If Trout pulls the upset and provides that dessert, maybe then, the push will come. But he doubts it.