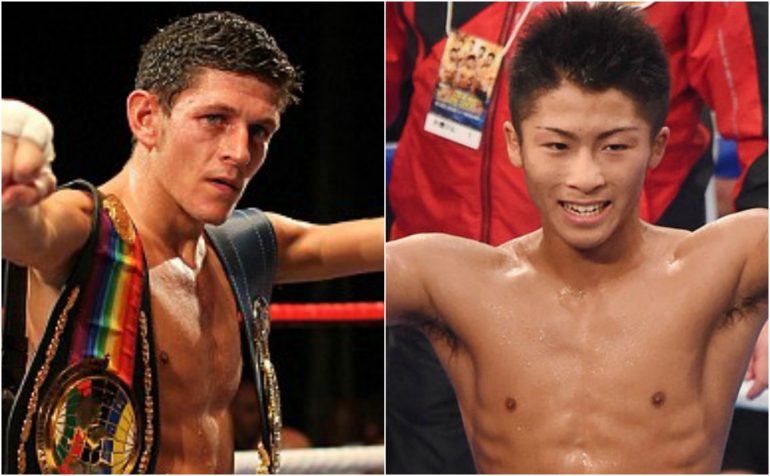 Jamie McDonnell (left) fights Naoya Inoue (right) on May 25.
21
May
by Anson Wainwright

He’s stepping into a new weight class to face THE RING-rated No. 2 118-pounder McDonnell and is keen to make a statement.

“I am extremely motivated,” Inoue (15-0, 13 knockouts) told THE RING through Tomoyuki Kataoka. “He is tall and has good footwork and also is an aggressive boxer. I have done my preparation for the fight. I am convinced that I prevail over him in every aspect.”

To ready himself, Inoue’s team has brought unbeaten featherweight prospect Raza Hamza and junior lightweight Leigh Wood from the U.K to spar with their man.

“Monster” has also had two training camps in and around the hills of the seaside city of Atami, Shizuoka, Japan.

Inoue, THE RING’s No. 1-ranked 115-pounder, had long sought a unification at junior bantamweight but when the teams of WBA beltholder Kal Yafai and the IBF’s Jerwin Ancajas balked at a potential meeting, Inoue’s promoter Hideyuki Ohashi decided to move his charge up in weight.

“I don’t think that they had any confidence in themselves to fight Naoya,” said Ohashi. “At junior bantamweight, he found it difficult to reduce his weight and therefore he cannot show (his best), in a regular fight, his great power only during his sparring. At bantamweight, he is able to show such great power also in a fight.”

Earlier this month, details were laid out at a press conference, in London, for the second season of the World Boxing Super Series. One of the divisions it is centered on is bantamweight.

The WBO titlist Zolani Tete, IBF ruler Emmanuel Rodriguez and WBA beltholder Ryan Burnett all announced they will be part of the tournament.

Mr. Ohashi hinted his fighter may well add his name to the outstanding cast, if all goes well against McDonnell.

“I have received an offer on the WBSS,” he said. “We will consider on whether to join in the series after winning the bout with McDonnell.”