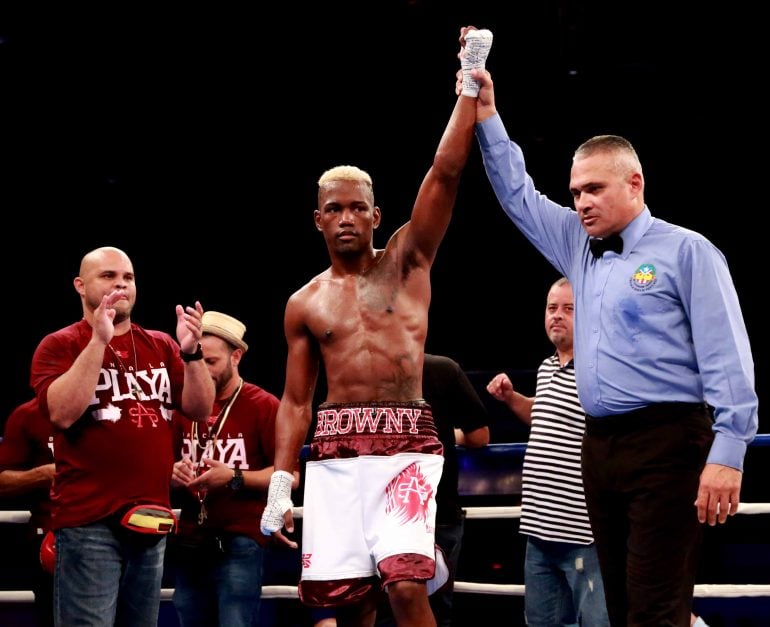 Photo by Esdel Palermo
20
May
by Francisco Salazar

With Miguel Cotto retiring after his final bout, on December 2, Puerto Rico is looking for a fighter to carry the torch, as the face of boxing from the island.

Undefeated junior welterweight Subriel Matias may be that fighter, especially if he is able to repeat his impressive performance from Saturday night.

Estrella was the more effective fighter early on, throwing a right hand and two left jabs before moving away from Matias. With each passing round, the stronger Matias closed the distance between the two, throwing lead right hands and left hooks to the head.

The 26-year-old Matias (10-0, 10 knockouts) let his hands go more in round three, ripping more punches to the body, as Estrella backed up against the ropes. The amount of punches Estrella received increased, forcing him to fall into defensive mode and throw one punch at a time.

At the end of the fourth round, a left hook to the body hurt Estrella, who took a knee after the round concluded. Rather than receive further punishment, Estrella (28-2, 24 KOs) chose not to come out for round five.

“I have a lot to improve,” said Matias after the fight. “I lost the first two rounds. He dominated me but we knew that the victory was ours because I go from less to more, and, already entering the third round, I was better. I knew I was going to catch it. I know I could given more in the victory but we won and I’m happy.

“I want to thank Adrian Estrella for the opportunity to face him.”

Matias, who is penciled in to fight again in August or September, has yet to fight beyond the fourth round.

Francisco A. Salazar has written for RingTV.com since October of 2013 and has covered boxing in Southern California and abroad since 2000. Francisco also covers boxing for the Ventura County (California) Star newspaper, BoxingScene.com and FightNight.com. He can be reached by email at [email protected] or on Twitter at FSalazarBoxing.