Getting to know Hanna Gabriels 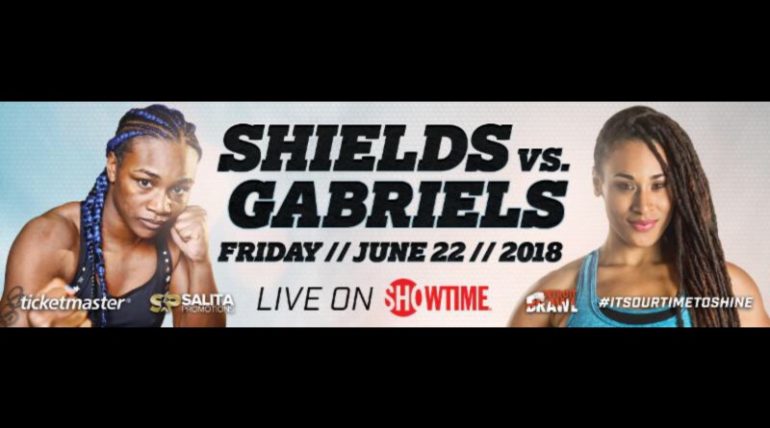 21
May
by Michael Woods

The women’s boxing push continues and, arguably, with HBO having broadcast a women’s fight and seeing a nice ratings number, reaches a new plateau.

It will unfold on Showtime, which decided more than a year ago that it would enter these waters, believing in the possibility that the pool will be enticing enough to fans that it can become a pocket of strength, as it is in mixed martial arts, rather than a gamble.

Claressa Shields, the two-time gold medal winner, who owns a 5-0 (with 2 knockouts) mark as a pro, is the head of the Showtime women’s wagon. She will fight Costa Rican star Hanna Gabriels (18-1-1, 11 KOs), who, on paper, looks like the Michigan boxers’ stiffest test as a professional. The vacant IBF and WBA middleweight titles will be up for grabs.

I touched base with the 35-year-old Gabriels to get a sense of where she comes from, how she got here and what she thinks of Shields, who is coalescing into something of a star attraction because she has a base of rooters – and also haters, who don’t fancy her level of confidence.

“Since I was little kid, I dreamed about becoming an elite athlete. I wanted to be a world champion or Olympic champion,” Gabriels replied, when I asked how she got into this rugged vocation. “I was actually in track-and-field, and the main reason why I got into boxing was to lose weight but then boxing opened the door to my childhood dream.”

The WBO/WBA junior middleweight titlist told us a bit about her upbringing, too. “My dad and mom were very inclined in teaching us to be disciplined, to have structure in our lives, and they taught us that we can achieve anything that we want just by becoming a better version of ourselves. Mom and Dad are still alive; I have six siblings and many nephews and nieces. Overall I have an amazing family!”

And what about Costa Rica; is it a boxing hotbed? “Costa Rica is actually well-known worldwide. It’s a very popular tourist destination; people are great. Our rain forest is amazing and people love it here. I have a great fan base in my country. It makes me happy to be a pioneer in this industry.”

Some boxers are fortunate enough to be able to go all in on their dream, to box full-time. Others have to juggle to make ends meet. What about Gabriels? “I’m a 24/7 kind of girl. I do boxing full-time but I also committed to teach boxing to the community, so I do that in the morning after dropping my daughter in school. Then I teach classes. I’m also a mom and a wife 24/7. I teach again in the evening and, at night, I go to school to become a physical therapist and the only way I’m able to do all this is by being very organized and relying on my support system, which is my beautiful family.”

She also gave a shout out to her entire team: “I have an amazing team. My manager Hector Fernandez De Cordova has done very good by me. My main coach and life partner (junior lightweight contender) Bryan Vasquez has been wonderful for this camp. Pedro Gonzalez, my second, has been very studious of the fights and the opponents. Esteban Quezada, my strength-and-conditioning coach, has been amazing with diet and great physical work. We have a great team to do great things.”

Gabriels has had 20 fights in her 11 years as a professional. Has she found it hard to get fights on the regular? “It is indeed very difficult to get fights, since, in this sport, we are not appreciated as male fighters,” Gabriels said. “Since boxing culture is not big in my country, sponsors don’t jump in and they want to get in with no money in a world-class event. It is hard to be a female world champ, since money is tight and difficult to move around. The support is not the ideal but I’m so committed and being a world champ is not just raising your hands after you win; it’s an opportunity to become an inspiration. You show people you do whatever it is you have to do to make it happen and show them they can do it too.”

Acceptance seems to be building, with more women getting TV dates. Does Gabriels see it that way? “I don’t think it is really acceptance. I think TV is more open to broadcast but people still don’t accept it very much,” Gabriels said. “But I really don’t pay attention to that; I pay attention on me, on becoming a better fighter and waiting for opportunities like the one I have June 22,” she said, of the feature fight on a card promoted by Salita Promotions, at the Masonic Temple in Detroit. “That could open a very wide door for me and all the females trying to make it in this sport.”

Did Gabriels watch Braekhus vs. Reis? “I watched the fight; it was a very good fight. I actually fought Kali Reis (in 2015) and she’s an amazing human being. Even though we fought, we support each other and I was very happy to see them give their all. It was such an exciting fight. They did a tremendous performance. I also know they didn’t make good money, as they both deserved for the kind of fight it was but I’m happy to say that if these girls – I don’t know about Claressa – and myself are not making fair money, we just hope to open that door for the girls after us.”

Let’s focus on Shields, the reigning IBF/WBC super middleweight titleholder…Is she all that? “I don’t think Claressa is a great fighter. She’s got a great team behind her, great exposure, great marketing but there are many names out there with amazing talent and they are not calling themselves the greatest of all time. Girls like Natasha Spence, Yesica Bopp, Cecilia Braekhus, Layla McCarter, Jackie Nava, Ana Marie Torres, Amanda Serrano, etc.”

So tell us, how does one beat Shields? “Well, definitely not the way they all have been fighting her. We are going to do all we have been working on here in camp and that will do the trick.”

Prediction, please? “My prediction is that the (fans) will win, no matter the outcome of the fight,” Gabriels said. “I can tell you I’m more resourceful and I’m smarter. She’s been saying she’ll win but hey, I’m a champion too, with more experience and them titles haven’t been handed to me by anyone. I will win this fight!”