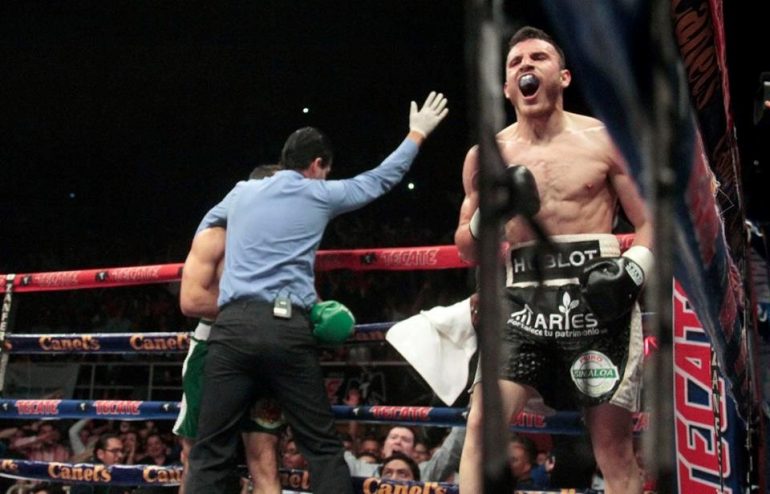 Omar Chavez finishes off Ramon Alvarez in two to avenge a previous defeat. Photo: Zanfer Box
18
May
by Francisco Salazar

Mexican middleweight Omar Chavez goes by the nickname of ‘The Businessman,’ but his career as a professional fighter has not received much in the way of returns.

After posting a string of victories, the son of legendary Hall-of-Famer Julio Cesar Chavez dropped a 10-round unanimous decision to fringe contender Roberto Garcia. That loss came three-and-a-half months after knocking out Ramon Alvarez, older brother of Canelo, in the second round.

The 28-year-old Chavez (36-4-1, 24 knockouts) now hopes to get his career back on track, when he faces Jose Carlos Paz on Saturday night at the Palenque de la FENADU in Durango, Mexico. The fight will air on beIN Sports en Espanol (11 p.m. ET/ 8 p.m. PT).

Chavez has built a winning record against average opposition, or those on the downside of their career, including former world titleholder Joachim Alcine in October 2013.

Jose Carlos Paz (21-7-1, 12 KOs) might be the ideal opponent for Chavez to score a decisive victory. The 27-year-old slugger, who resides in Villa Maria, Cordoba, Argentina, has lost three of his last five bouts.

In his most recent outing in February, Paz was knocked out by newly-crowned WBO junior middleweight titleholder Jaime Munguia. Prior to that setback, he scored a 10-round unanimous decision over Jorge Paez Jr.

Opening the beIN Sports en Espanol telecast will be a 10-round junior welterweight bout between fringe contender Pedro Campa and Uriel Perez.

Campa (28-1, 19 KOs) rebounded from his first loss as a pro to defeat Ivan Alvarez by decision in February. That same month, Perez (16-3, 15 KOs) lost a 10-round split decision to Carlos Jimenez, snapping a nine-fight win streak.