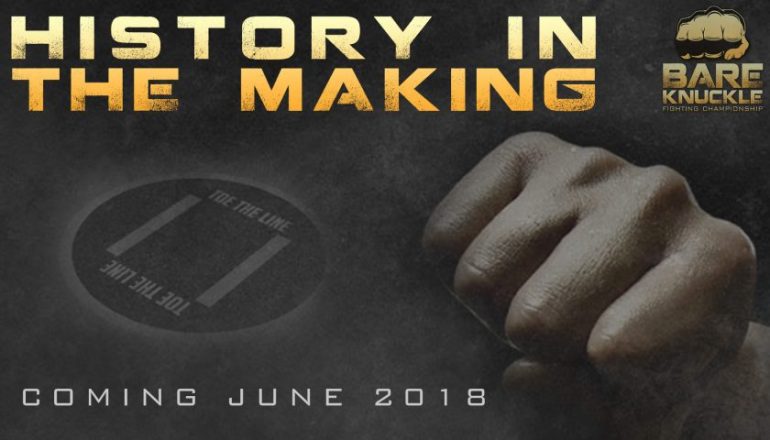 16
May
by Michael Woods

Since 2009, David Feldman has been working on bringing his concept to the execution stage: Bare knuckle fighting. He’s long thought that this old-school style of combat could and should have a place in the combat sports realm today. So he knocked on doors, rang phones, sent emails and politely stalked anyone and everyone he thought could help bring Bare Knuckle Fighting Championship to the finish line.

On June 2, Feldman’s wish comes true; we heard on the Everlast “Talkbox” podcast that the first sanctioned event will unfold in Wyoming, and be broadcast on pay-per-view.

The founder Feldman and fighter Bobby Gunn, purportedly 73-0 on the underground circle and known to pro boxing fans for having fought Tomasz Adamek, James Toney, Glen Johnson and Roy Jones, came to Manhattan and clued us in on what the rules and regulations are, and lobbied us as to why they think this brand of fighting will resonate with the masses.

For starters, Feldman said, they ran a bare knuckle event back in 2011, sort of an outlaw outing, in that it wasn’t sanctioned by a state commission. It was held on an Indian reservation and the response was startling to him. Over a million attempts were made to purchase the card on PPV, on an internet stream. But that system crashed and Team Feldman wasn’t able to collect on purchases. This time, the card will run on PPV, on the usual outlets, so he’s thinking that’s one huge leap forward toward success.

“We’re bringing back the old into the new,” he said. “Just like anything that’s been around awhile, you modify it, and you bring it back into a new perspective.” Feldman grew up in a fighting family; dad Marty fought pro and trained boxers, like Frank “The Animal” Fletcher and Prince Charles Williams. Brother Damon is also a promoter.

At times, Feldman says, “We had eight to 10 fighters living with us in the house,” in Pennsylvania, and he enjoys the memories. “Two guys that lived with us are on death row right now,” he shared.

And yes, BKFC will indeed feature bare knuckles. No gloves allowed. You can wrap your wrist but knuckles are bare. Gunn explained that rather than being more brutal, the lack of padding will mean there will be less sustained pummelings, the sort which most often lead to brain trauma.

The ring is actually a “squared circle,” 22 feet, and the fighters start out toeing a line and start scrapping right away. Clinching will be discouraged, and fights are five, seven and nine rounds, at two minutes each round.

Names you might know taking part include Paul Spadafora, the ex-lightweight titlist, who is 42 year old, and holds a 49-1-1 (with 19 knockouts) pro pugilism record. He’s had missteps in the law-and-order realm and he thinks he can make a late-inning splash in this new endeavor. Also, ex-UFC heavyweight champ Ricco Rodriguez, age 40, an imperfect vessel seeking the maintained willpower to stay on the narrow path of righteousness, will try this new outlet.

Gunn explained further that hand wraps and gloves have fighters seemingly punching with casts on their fists. He doesn’t punch as hard in bare knuckle, throws usually at maybe 50 percent, because he doesn’t have that padding to keep his hands un-injured. The fighter, who told us he comes from Traveller, or “gypsy” stock, said, “We love the Lord, our wives and fighting.”

“Travellers are like pit bull dogs,” he said, and are bred for fighting. Gunn’s a distant cousin to former world heavyweight champion Tyson Fury, he shared, and I noted that Fury is superior in the talking realm as much as in the fighting one. “A fight is a fight but you gotta sell yourself,” Gunn said. “I’d rather die on my feet than lay down.” If he fought the Adameks, Toneys, Johnsons and Joneses in bare knuckle, he believes he’d beat them all.

Feldman said he’s been knocking on doors for soooo long. He tried to get UFC boss Dana White involved, and jumped a fence at an event. “You’ll never get it done,” White told him. “See you at the top,” Feldman said.

Twenty-six states told him they would do it but none wanted to be first, Feldman said. “Wyoming is the wild, wild west,” he said, and gives props to its officials for having the courage to jump in.

“I tried to force it on a couple states and then I took a step back,” he said, and realized that his sport will be safer. Football sees helmet-to-helmet contact causing more brain trauma. The padding makes for more repetitive punishment and, in bare knuckle, one blow will render a fighter all done. He’s been able to hone his pitch and more people are seeing this wisdom.

On June 2, there will be 14 fights, 12 on TV and a three-hour window for the PPV. Yes, there will be hitting, tons of it. This won’t be a kind and gentle session. When asked why he was entering, one fighter told Feldman, “I love violence.”

Gunn hopped in and said, “This isn’t barroom brawling.” No one has ever died from bare knuckle boxing, which dates back to the 1800s.

He comes from an underground circuit, and has dealt with surprising turns in fights, like the time he had an underground fight in New York City. “Guy put a hard bite on me, like a vampire,” and said the “fair play fight” went into “rough-and-tumble” mode. Down in the murky fight zone, literally and figuratively shady, Gunn was worried he wouldn’t walk out alive. “I’ve been stabbed, everything you can imagine.” But he walked away, with some moolah and scrubbed the bite with alcohol, living to fight another day.

That’s what this is all about. Certified characters, and some folks who could use a second or third chance in life, will take part. Many will do it because they have a fighting spirit; fighting is in their blood and they can’t quit that addiction. And yes, making money will be a consideration. Our age harkens back to the earlier 1900s, with the haves and have-nots being a gulf apart. People need to feed their families and not everyone invents an app or learns coding. Some people fight to satisfy their desire for combat, and others to raise money for the monthly car payment. Bare Knuckle Fighting Championship is for and about those people, and I appreciate the honesty in acknowledging that reality.

Here is the “Talkbox” archive.