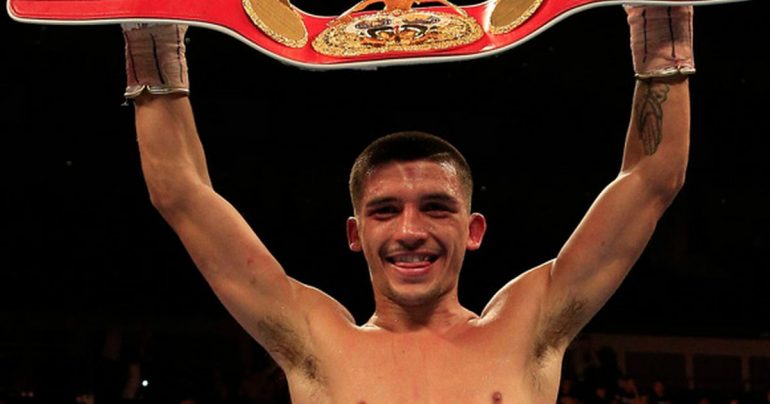 Selby (26-1, 9 knockouts) will be facing his rival behind enemy lines, when he enters the lion’s den in an all-British clash that will take place outdoors, with somewhere in the region of 20,000 fans expected.

The quiet Welshman is firmly intent on sending the majority of those in attendance home unhappy by turning back the challenge of the Leeds-born fighter, Warrington.

“I take it as it comes, it’s just another fight,” a relaxed Selby told RingTV.com. “It’s all been built around Josh Warrington. We couldn’t have given him no more advantage. He’s got everything in his favor but, again, I’ve boxed outdoors. I’ve got the experience boxing in front of big crowds. I’ll take it all in my stride. I’m looking forward to and relishing the opportunity to fight in such a big event.”

Selby, who is rated No. 5 by THE RING at 126-pounds, and the No. 9-ranked Warrington (26-0, 6 KOs) have shared a mutual discord for several years. However the 31-year-old champion was quick to downplay that in the build-up.

“To be honest, (Warrington)’s sort of created it himself,” said Selby. “I haven’t got any bad blood toward no one, until he starts talking rubbish. At the time there was some bad blood but now he’s just another opponent.”

As usual the champion decamped to Los Angeles. This has been his 10th visit to the boxing training capital, having honed his skills at the famed Wild Card and Maywood Boxing Clubs.

Selby returned home 17 days before the fight to acclimate to the U.K. time zones before traveling to Leeds yesterday and attending the final press conference today.

The silky-skilled Selby is treating this fight like any other, focusing on his own ability and letting his opponent worry about him.

“I don’t study opponents; I just get in there and do what I do well,” he said. “I don’t really like to say until I see in the fight. If something is working, I just stick to it. I don’t set up a game plan for each fighter, I just go in and do my own thing.

“He’s decent; he’s an improved fighter. He’s gone down similar routes to me, picking up my vacant titles. He’s young; he’s hungry and it should make for a good fight. Just all ’round, he can box a little bit, decent work rate. Sometimes he fights pressure fights.

“Same as any opponent, I treat them all with the same respect. It takes a lot to get in the ring. I don’t like to think this is an easy fight or this one is a hard fight. I treat them all like they’re all hard fighters. I expect to be in a tough fight every time, so I prepare myself well.”

The winner will potentially be primed for another stadium fight in late summer. It was announced recently that Carl Frampton will fight at Windsor Park, Belfast, on August 18. Selby is confident that Frampton’s opponent will be him.

“It’s exactly that; it’s good preparation for these big fights,” he said. “Hopefully I come through OK and go straight into a fight with Frampton and, if I can win them two (bouts), the world’s my oyster. I could go into a big unification fight against one of the other champions. That would top off a perfect year.”

Selby will also have his eye on upcoming featherweight action between Gary Russell Jr. and Joseph Diaz Jr., who will contest Russell’s WBC title, on Saturday, and the June 9 Los Angeles rematch between WBA beltholder Leo Santa Cruz and Abner Mares.

“Gary Russell Jr.’s an outstanding fighter. He’s been inactive,” he explained. “‘JoJo’ Diaz has been very active, good fighter, but you still have to favor the champion in that one. I think it’s an interesting fight.

“It’s another big fight, both (Santa Cruz and Mares) being with Al Haymon. I could potentially box either one of those guys in the future. I’ll be watching that; I may go watch it live. It’s difficult to say; it could go similar to the last fight but, again, Mares could have a new lease of life after winning the title again. It’s difficult to say.”

Before Selby can go big game hunting he has to take care of domestic business.

The fight and undercard will be aired live on BT Sport/BoxNation at 7:30 p.m. local time.