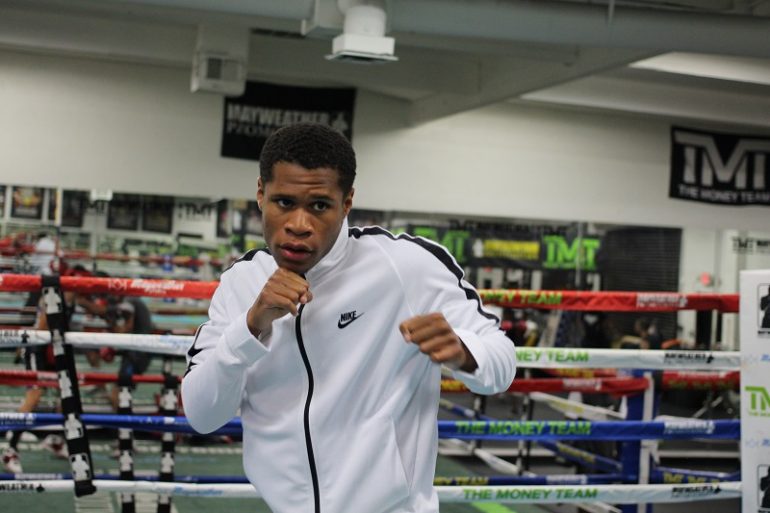 Devin Haney was a little sore on the car ride up to New York to catch the Vasiliy Lomachenko-Jorge Linares fight in Madison Square Garden. Otherwise, the 19-year-old was unmarked and impressive in dismantling Mason Menard at 3:00 of the ninth round Friday night at Philadelphia’s 2300 Arena in the main event of Showtime’s “ShoBox: The New Generation.”

“Everything I laid out worked,” Haney said. “It was everything that I thought it would be. I stuck with the game plan and it went exactly how I planned it. It was a good experience to be in there with a guy like that.

“It was definitely a confidence builder.”

The talented lightweight showed his hand speed and footwork in pelting Menard (33-3, 24 KOs). Menard, who was coming off a 14-month layoff, the longest sabbatical of his career, attempted to cut off the ring. That didn’t work, because Haney was too fast.

“I was satisfied with how I stuck with my game plan,” Haney said. “He tried a bunch of different things. He tried to box me, counter punch me and rough me up. But in the end, I stuck to the game plan and got the win. From what I saw of the fight tape, if there was something I could have done differently, I could have let my hands go more than I did.

“I got the work in. I wasn’t trying to stop him. I wanted to get the rounds in, and wanted to show my full arsenal. Going into the ninth, my father [William] told me to go in and go for the kill. That was the round I stopped in. One thing about Mason is he liked to come up in the end. He had knockout some decent fighters in the late rounds. I knew that in the back of my mind. I had to stay sharp.”

“I had to be, and patience is a key, especially at a young age,” Haney said. “I felt like I showed the world that I’m a force to be reckoned with. I know I have some big things ahead.