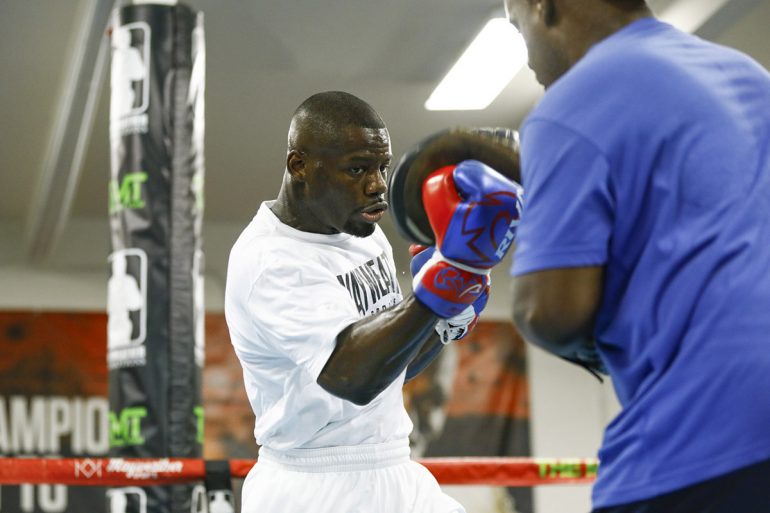 Photo by Esther Lin / Showtime
07
May
by Anson Wainwright

Hoping to build his case for a title shot, cruiserweight contender Andrew Tabiti (15-0, 12 knockouts) will return to action on Friday against veteran Lateef Kayode (21-2, 16 KOs) at Sam’s Town in Las Vegas. The card will be broadcast on Bounce TV and will feature Ishe Smith vs. Tony Harrison.

The 35-year-old Kayode is in desperate need of a win for different reasons, having lost his last two fights after dropping back down in weight from a brief campaign at heavyweight. Kayode was stopped in eight rounds by Dennis Lebedev in 2015, and then — nearly two years later — dropped a wide decision to Keith Tapia.

Tabiti, who is currently ranked No. 10 by THE RING at 200 pounds, knows Kayode is a wounded animal and intends to put him out of his misery.

“I feel like he’s a good name; he was never world champion but he’s fought some legitimate guys,” Tabiti told THE RING. “It’s a good step-up fight, too. He also seems like he’s 35, so on his way out. It’s a good fight for me to come out against a veteran. After this fight, hopefully I’ll get a title fight.

“Beast” acknowledges what Kayode brings to the table but says it won’t be enough.

“He’s durable. He’ll bring his roughness; he’s real tough. It’s not going to be an easy knockout. He comes to fight,” said Tabiti. “I seen his last fight. I think he looks for bodyshots, but one thing I see he won’t get away from is my jab, fast hands and my athleticism. I’m young, athletic and fast. That’s one thing that is going to be a big factor in my gameplan.”

Tabiti was born and raised in Chicago until his family relocated to Las Vegas when he was 13. In high school he weighed 270 pounds and played football as an offensive lineman before discovering boxing.

He shed weight and with less than 15 fights impressively reached the Golden Gloves semifinal in 2010 before turning professional in 2013. Since then, he’s gone about his business in the criminally underrated cruiserweight division.

“It was great. I’ve been a part of a couple of Floyd’s cards — the two [Marcos] Maidana fights. A part of Mayweather-Canelo [Alvarez] and Mayweather-[Manny] Pacquiao — them two fights I didn’t fight because the opponent fell out,” he said. “Being a part of it is a blessing. I’ve got to thank Floyd Mayweather. If it wasn’t for Floyd Mayweather, all this stuff wouldn’t be possible. I really appreciate it. I feel real blessed.”

He hopes to parlay those experiences into a title shot if all goes well against Kayode.

“Whoever wins the [World Boxing Super Series] tournament, I would like to fight them (the winner of Oleksandr Usyk vs. Murat Gassiev) for all the belts,” he said. “Hopefully they don’t vacate, which might be possible, and go to heavyweight ’cause there’s more money there. Hopefully they stick around and I can fight the winner. That would be great.”