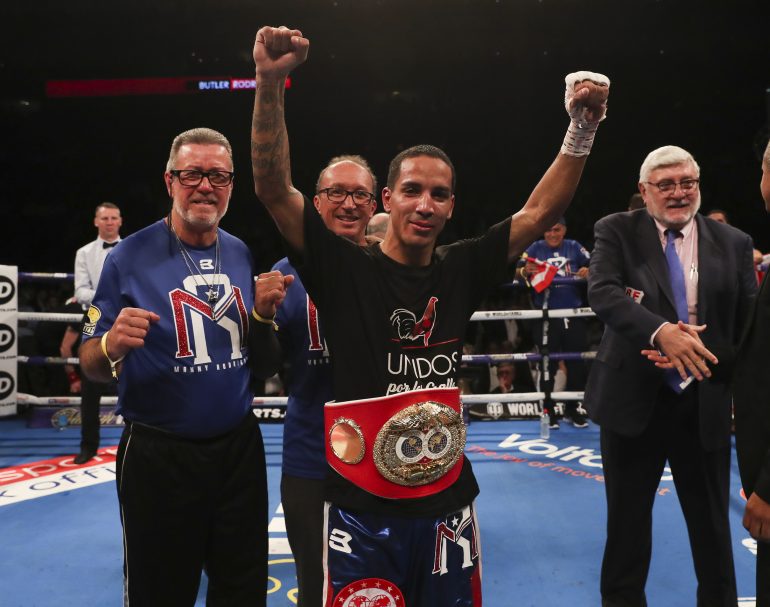 File photo by Lawrence Lustig
05
May
by Tom Gray

Highly-touted Puerto Rican contender Emmanuel Rodriguez came of age with an emphatic 12-round unanimous decision over Paul Butler to claim the vacant IBF bantamweight title at the O2 Arena in London, England, on Saturday. Official scores were 120-106 twice and 118-108.

Rodriguez, who is rated No. 8 by THE RING at 118 pounds, knocked Butler down with a world class left uppercut-left hook combination in Round 1. The Englishman, a former titleholder at the weight, was badly hurt and did well to recover, although a barrage of punches sent him down from a second time before the session ended.

The visitor had his way from start to finish.

“I found it easier than it should have been but a win’s a win,” said Rodriguez in his post-fight interview with Sky Sports. “We’ll go anywhere to defend of get another belt. We’ll go anywhere in the world to fight.”

Butler’s face was bloodied at the end of Round 3 and that damage was caused by a steady stream of accurate left jabs. Rodriguez (18-0, 12 knockouts) started to showboat and was picking the target off for fun without going through the gears. Butler gamely attempted to get some kind of offense going but it was to no avail.

If the visitor was guilty of anything it was limiting his offense. One got the impression that he could have put the foot down, but the 25-year-old boxer-puncher was content to go the distance and claim victory with miles of room to spare.

The title was on the line for Rodriguez only as Butler came in 3.5 pounds over the bantamweight limit of 118.