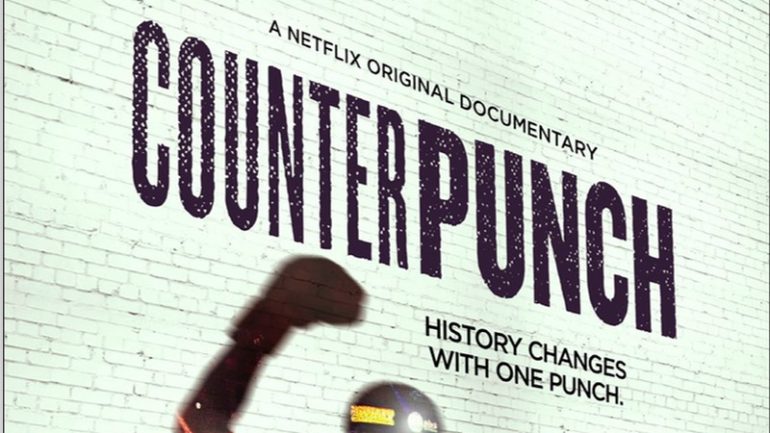 02
May
by Michael Woods

The National Academy of Television Arts and Sciences announced the nominees for the 39th Annual Sports Emmy Awards and, on May 8, the winners will be announced, at Lincoln Center, in Manhattan.

I won’t pretend to be an unbiased observer, and tell you that I have no dog in the hunt, and will not in fact be rooting hard for one of the nominees to get the gold.

My pick is in the Outstanding Long Sports Documentary and I hope that “Counterpunch,” from Netflix, gets the nod.

For one thing, I like the filmmaker who helmed it, Jay Bulger, and, for another reason, he cast me in the doc. Bulger and Netflix is up against ESPN’s “30 for 30,” “Celtics/Lakers: Best of Enemies” (ESPN Films/Hock Films), “89 Blocks (FOX/FS1), “Disgraced Showtime” (Bat Bridge Entertainment), “VICE World of Sports Viceland” and “Rivals: Boom Squad” (Vice Media).

Mike Tollin from Mandalay Sports Media Counter Punch helped coalesce the vision put together by Bulger, who is a product of the New York Golden Gloves boxing scene. If you haven’t screened it, please do so. It takes a look at the state of boxing and the sports influence in three boxers’ lives: Peter “Kid Chocolate” Quillin, Chris “Lil B-Hop” Colbert and lifetime amateur Cam F. Awesome.

And why, maybe, should you root for “Counterpunch” to win? Because Bulger was able to secure $300K to start and fund a gym in the Bronx, which will help take at-risk youth off the streets and get them into the gym.

“I boxed in the Bronx for many years,” Bulger told RingTV.com. “I never paid for a gym membership. I was a student and if they had charged me, I’m not sure if I would have boxed. It’s unfortunate that, so many years later, there is not a single free gym in the Bronx. Furthermore we need more connections between law enforcement and at-risk youth. The PAL boxing gyms were a great solution to these issues. They were free and connected cops with kids. Unfortunately they closed their program. Years later, Sgt. Pat Russo opened Atlas Cops and Kids in Flatbush, Brooklyn, which has become the most successful gym in the country. I am currently endeavoring to expand their program into the Bronx.”

Tollin, who produced the documentary with the Washington D.C.-bred Bulger, gave props to the director, who burst on the scene with his “Beware Mr. Baker” doc in 2012, which introduced a new generation to the irascible drummer and co-founder of Cream, Ginger Baker.

“At a time when boxing’s role on the sporting landscape is being severely challenged in the U.S., Counterpunch gives us a real sense of those forces at work,” Tollin said. “Our director Jay Bulger’s experience as a boxer gave the film an intimacy and authenticity, and he also reminded us of the role urban boxing gyms have played and could continue to play in steering at-risk kids away from trouble.”

I know; I know. You’re not supposed to cheer from the press box. However I say there’s an exception to almost any rule and I know how passionate Bulger is about having gyms open to kids, who would otherwise be falling through cracks, right into our for-profit prison system. Go Counterpunch!