On September 16, 2017, Saul “Canelo” Alvarez and Gennady Golovkin fought to a draw at T-Mobile Arena in Las Vegas. Their middleweight championship bout generated a live gate of $27,059,850, the third largest in boxing history. The 22,358 fans in attendance comprised the largest indoor crowd ever for a fight in Sin City. Their May 5, 2018, rematch was expected to equal or better these numbers. Tickets for the rematch topped out at $5,000. Golovkin opened as a 7-to-5 betting favorite which was what the line had closed at the first time around.

The consensus opinion among the boxing media was that Golovkin had deserved the decision in their first outing. “All Gennady has to do is what he did before and he wins the fight again,” Abel Sanchez, Golovkin’s trainer, said. 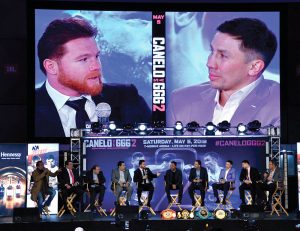 But Jose “Chepo” Reynoso, who manages and assists in training Canelo, had a contrary view. “In every fight, Saul has showed progress,” Chepo noted. “We believe that Golovkin is always the same fighter. He has reached his limit and, as they say, an old dog does not learn new tricks. So I don’t think Golovkin is going to surprise Canelo. We will be the ones who will surprise him. Canelo has more things to show. He’ll also be better acclimated to 160 pounds since the last fight was his first at 160.”

“We don’t need to badmouth each other,” Canelo said of Golovkin at a February 27 press conference to jumpstart the promotion. “We don’t need to sell it that way. The fans know what we bring.”

But the fight predictions and expressions of good will were soon obsolete.

On March 5, it was revealed that urine samples taken from Canelo in Mexico by the Voluntary Anti-Doping Association (VADA) on February 17 and February 20 had tested positive for clenbuterol.

Clenbuterol is widely used by bodybuilders and athletes. It helps the body increase its metabolism and process the conversion of carbohydrates, proteins, and fats into useful energy. It also boosts muscle growth and eliminates excess fats caused by the use of certain steroids. Under the World Anti-Doping Agency Code, no amount of clenbuterol is allowed in a competitor’s body. The measure is qualitative, not quantitative. Either clenbuterol is there or it’s not.

The Alvarez camp said that the positive tests were no doubt the result of Canelo having inadvertantly eaten contaminated meat. And as a practical matter, few people expected the rematch to be pulled down. The Nevada State Athletic Commission certainly wasn’t going to do it.

But the Golovkin camp refused to let the matter rest.

A March 15 letter sent on behalf of Golovkin and his promoter, Tom Loeffler, to Nevada State Athletic 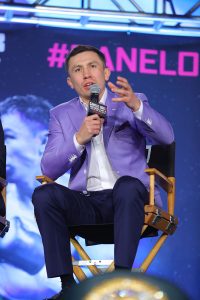 Commission executive director Bob Bennett, NSAC chair Anthony Marnell, and VADA president Margaret Goodman demanded that the commission hold Alvarez to a standard of strict liability insofar as the presence of clenbuterol in his system was concerned. The letter also asked that the NSAC conduct an investigation and hold a full hearing with regard to possible performance enhancing drug use by Canelo.

Golovkin raised the ante further at a March 20 sitdown with reporters at his training camp in Big Bear.

“I’m a clean athlete,” Gennady said. “After the first fight, I knew he was not clean. It’s not Mexican meat. This is Canelo. This is his team. Canelo is cheating. They’re using these drugs and everybody is just trying to pretend it’s not happening. Ask any doctor. Let him explain what those [muscles] are. It’s better even to use the lie detector. Then there wouldn’t be any silly questions about meat or fruits or chocolate.”

On March 23, the Nevada State Athletic Commission announced that Alvarez had been temporarily suspended as a consequence of the two positive tests and that the matter would be finally adjudicated at an April 10 commission meeting. Six days later, Bob Bennett revealed that the NSAC had filed an official complaint against Canelo and that the hearing had been moved from April 10 to April 18 (only seventeen days before the scheduled fight date).

On April 3, Canelo announced that he was withdrawing from the fight.

Finally, on April 18, the NSAC voted unanimously to approve a settlement agreed to by Canelo that called for the fighter to be suspended for six months retroactive to the date (February 17) of his first positive test for clenbuterol. There was no admission of wrongdoing on Canelo’s part. But there was an acknowledgement that clenbuterol had been present in his system.

So . . . What are the takeaways from the Canelo clenbuterol controversy to date?

#1: THE NEVADA STATE ATHLETIC COMMISSION DESERVES CREDIT FOR THE STAND THAT IT TOOK

There has been grumbling in some circles that the NSAC should have suspended Alvarez for a year or longer. But let’s get real. When the positive test results were first announced, virtually no one thought that Canelo would be suspended.

Las Vegas stood to make a lot of money off the Canelo-Golovkin rematch. In 2002, the NSAC denied Mike Tyson a license to fight Lennox Lewis after Tyson sparked a brawl and bit Lewis on the leg at a press conference in New York. But Tyson had a long record of antisocial behavior. And the casinos had come to believe that the “crowd” he attracted to fights was scaring away highrollers.

Canelo brings in patrons that the Las Vegas establishment likes. The NSAC could have finessed the issue the way the New York State Athletic Commission did recently when it allowed Luis Ortiz to fight Deontay Wilder in New York. But it didn’t.

#2: CANELO’S REPUTATION HAS TAKEN A HIT

In addition to suffering the loss of a huge payday, Canelo must now deal with the reality that a lot of people think of him as a “cheater.” That’s a heavy burden for a proud man to carry.

Golden Boy has said that Canelo will return to the ring on September 15. The assumption is that he will do so in Las Vegas against Golovkin.

Not so fast . . .  There’s no guarantee that Canelo will fight Golovkin next. Or fight in Las Vegas.

Canelo is angry. Unlike Golovkin, he has no sanctioning-body mandatory obligations to meet. And Canelo could make a lot of money by challenging – say – Billy Joe Saunders for the WBO middleweight belt to celebrate Mexican Independence Day. That fight could be in Las Vegas. Or Texas. Or England.

Oscar De La Hoya (Alvarez’s promoter) has said, “My focus is Canelo, one hundred percent. Whatever he asks, I have to do.”

Gennady could start losing belts outside the ring. He benefitted when the WBC enforced its rules 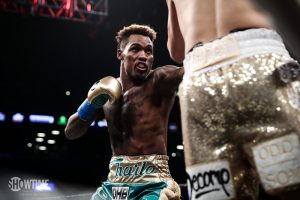 As of this writing, Golovkin has mandatory defense obligations to fulfill against Jermall Charlo (WBC) and Sergiy Derevyanchenko (IBF). Neither of these fights would be anywhere near as profitable for him as a rematch against Canelo. Charlo would be a particularly high-risk / low-financial-reward opponent.

#5: CANELO IS NOT SUBJECT TO DRUG TESTING OF ANY KIND AT THE PRESENT TIME

Canelo’s April 18 settlement agreement with the Nevada State Athletic Commission required that he accept a six-month suspension retroactive to February 17. But the only future PED testing required is referenced in paragraph 1.3 of the agreement which provides that he must undergo testing twenty-one days, fifteen days, and three days before his next fight in Nevada. The agreement further states, “If, for whatever reason, Alvarez does not seek a future unarmed combatant’s license in the state of Nevada, then his failure to provide negative tests of his urine to the commission shall not be deemed a breach of this Agreement.”

Also, to date, Canelo has refused to enroll in the World Boxing Council’s Clean Boxing Program, which provides for random PED testing by VADA.

Thus, in theory, Canelo could use drugs of his choosing while under suspension, and these drugs would go undetected if they clear his system before the contract for his next fight is signed and a new round of testing begins.

The WBC has sent ambiguous signals recently regarding the scope of its commitment to the very-promising Clean Boxing Program that it inaugurated last year.

Insofar as Alvarez is concerned, the sanctioning body has issued a series of press releases stating without credible supporting evidence that Canelo’s positive drug tests came about as a consequence of his 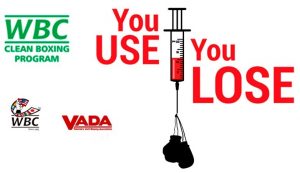 Also, Canelo is rated by the WBC despite having refused to enroll in its Clean Boxing program. WBC rules provide that, if a fighter refuses to enroll in the program, he will be removed from the WBC rankings. That’s what happened to heavyweight Jarrell Miller last year. But for unspecified reasons, Alvarez is an exception to this rule.

Once again, VADA has done its job. Indeed, for the last month, one could be forgiven for referring to the NSAC as the neVADA State Athletic Commission.

The fighters – whose lives are at risk – know the truth. The United States Anti-Doping Agency has a budget in excess of ten million dollars a year. After a decade of testing boxers for illegal performance enhancing drugs, USADA has reported one positive test.

Margaret Goodman has dedicated time and her own financial resources to create the most honest, comprehensive performance enhancing drug testing organization in boxing. That makes her a hero and also target. On April 3, 2018 (the day Canelo withdrew from the Golovkin rematch), there were two cyber attacks nine hours apart on the VADA website. The attackers were unable to get past security and settled instead for temporarily shutting down the site with a 20,000 email spoofing attack.

Dr. Goodman’s work goes on. And it’s desparately needed because anyone who says that boxing is dealing effectively with its PED problem is either covering up or not paying attention.

Forty years ago, Ken Norton was known for his chiseled physique. Now most elite fighters in boxing are more chiseled than Norton ever was.

Thomas Hauser can be reached by email at t[email protected] His most recent book – There Will Always Be Boxing – was published by the University of Arkansas Press. In 2004, the Boxing Writers Association of America honored Hauser with the Nat Fleischer Award for career excellence in boxing journalism.