Arnold Khegai is coming to America, still the place to fulfill boxing dreams 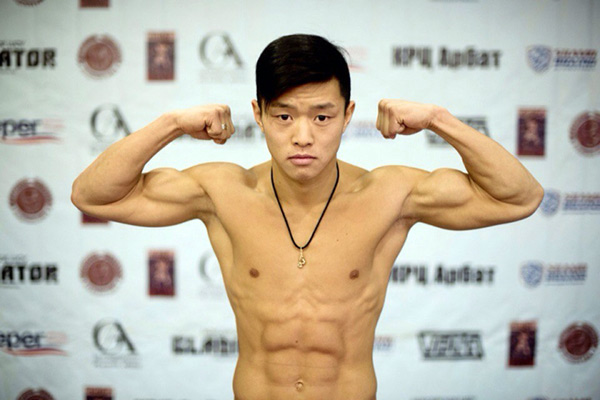 Sometimes it looks like our nation is in decline, if you watch certain channels or read certain sources. Outside boxing, and inside boxing, too. It seems like maybe Brit Anthony Joshua, for instance, really doesn’t NEED to conquer America to rule the heavyweight division with authority. Used to be you had to come to these shores if you wanted to really, truly, definitely make it.

AJ and his people have recently been pointing out that he can fill stadiums and our top American heavyweight…can’t.

This land is still closer to the be-all, end-all to many persons, and yes, still athletes who come from overseas to achieve a version of the American dream.

Arnold Khegai, an 11-0-1 super bantamweight from Ukraine, is very much looking forward to coming to America, next month, to glove up against Adam Lopez, in a card unfolding in Philly.

“I think boxing in the U.S. is the capital of world boxing, the next fight will be held on May 11, the opponent is good,” Khagei told us, via email. “I think we will show a spectacular duel! Follow me, and I hope in a short time, I will be the world champion, I want to win the American public!”

The fighter, born to Korean parents, started out in Thai boxing, but switched over because pugilism promised a more gleaming road. He looks up to Mike Tyson, he said: “I think he was the best fighter of all time, as everyone knows him from all over the world and I like Canelo among active fighters.”

The lone semi-blemish on his record, that draw, came in his sixth outing, in Moscow, against Yerzhan Zalilov. “It was not an easy fight, but I believe that I won that fight as most of the observers including the media,” explained the boxer who is being promoted by Dmitriy Salita.

He has decent hand speed, will snap the jab, but likes to work in close, and wing hard launches. He isn’t afraid to take a little wind up, work both sides of the body, and has a street fighter mentality, not getting overwhelmed by guilt if he rabbit punches inadvertantly. His defense isn’t impregnable and can be struck while backing straight up, but he prides himself on having a dense beard. Khegai values being aggressive and will square up and throw down, blowing off staying in structured mode, because he simply likes to brawl at times.

I wonder, how advanced is he…is he looking to make a pretty quick strike, if he beats 16-2-2 Lopez, a Texan, and seek out a title crack? “As far as I can see in the championship bouts, I think I will be a very difficult opponent for every champion at the moment. As far as a title fight, everything has its time, when the promoters decide then and there will be a fight, I will be ready at any time for anyone in the super bantamweight division.”

Some of his toughness comes from soldiering on, after his dad died in a car crash when he was three. His mom raised him and two brothers.

And his ring style? I asked him to describe it: “My style is very explosive. I like boxing in the exchanges, because I feel comfortable there. I am an aggressive fighter, I like to bring excitement to my fights, break my opponent down and knock him out!”

That attitude, sounds to me like it will resonate everywhere and if his deeds match his words, I wouldn’t bet against the Korean-Ukrainian snagging a slice of the American dream, sweet science style.