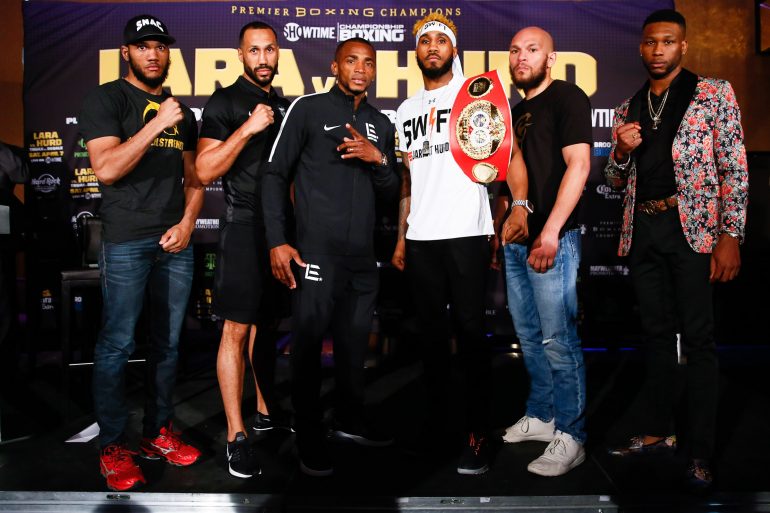 LAS VEGAS — Mayweather Promotions CEO Leonard Ellerbe couldn’t stop gushing over the quality of the tonight’s Showtime card during the final press conference for the triple header at the Hard Rock Hotel & Casino.

Normally, this kind of gushing is mere hyperbole with promoters invested in selling fights knowing that the undercard is full of mismatches. But, for once, this assessment is spot on because the main event Erislandy Lara (25-2-2) vs. Jarrett Hurd (21-0) is one of the best matchups that can be made in the 154-pound division.

Aside from Lara-Hurd, tonight’s card also features a rematch between Caleb Truax (29-3-2) and James DeGale (23-2-1). Truax pulled off a massive upset back in December to claim the IBF super middleweight title. Also on the card will be the return of Julian “J-Rock” Williams (24-1-1) as he continues his attempt to get right back into the mix of the junior middleweight division when he faces Nathaniel Gallimore (20-1-1) in a fight where Gallimore promises nothing short of a knockout.

As if the televised portion wasn’t solid enough, there’s also a fight between former titleholders Sergio Mora (28-5-2) and Alfredo Angulo (24-6).

Nah, this card isn’t bad at all.

And the mill press conference — which is usually where fighters go through the motions thanking their sponsors, saying they are in the best shape of their careers and vowing to win — also turned out to be interesting as well.

All three fights that will be broadcast on Showtime have intriguing narratives that have done nothing but help with the build.

Williams’ road to get himself back into title contention has a mouthy Gallimore standing in the middle of it. Although Gallimore hasn’t defeated any of the top names, he’s confident that he’ll expose Williams on Saturday and wasted no time trashing his opponent. 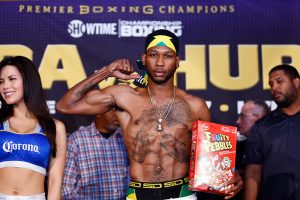 Nathaniel Gallimore has exhibited a colorful, brash personality during the build-up to his fight with Julian Williams. Photo / Stephanie Trapp-SHOWTIME

“For your birthday you’re going to get an early birthday gift,” the Jamaican-born fighter said to Williams during Thursday’s press conference. “I study my opponents and I stalk them. You thought (Jermall) Charlo hit hard? I hit harder. I hope you do your chin pushups because your chin is weak. How do you like (to be knocked out) on your face or your back?”

Williams, who still has the taste of the 2016 knockout loss to Charlo lingering, has remained relatively quiet in the build and has promised to let his actions speak louder than words. But things got chippy between the two as it was clear that J-Rock had enough of his opponent’s antics.

“He’s a nobody who wants some attention,” Williams said while also citing his opponent’s obsession over his social media. “I’m going to give him lots of attention on Saturday night. I’m going to shut this guy up.”

Williams promised that Gallimore will lose “every single round” and be stopped late on Saturday night while Gallimore stated under no uncertain terms that “demolish” Williams. One way or another, we should see some fireworks if both fighters live up to their word.

As for the co-main event, Olympic gold medalist James DeGale is looking to erase what he called a “horrendous, shocking and embarrassing” performance against Caleb Truax when he lost by majority decision overseas. He’s cited everything from his shoulder not being 100% to overlooking Truax as the reason for the loss. But he’ll have to prove that inside the squared circle on Saturday night.

“I’ll say 90 percent of (losing that fight) I blame on myself,” DeGale said. “I looked past him. I came back too quick and I wasn’t ready. No disrespect to him, I’ve fought the best in my division.” 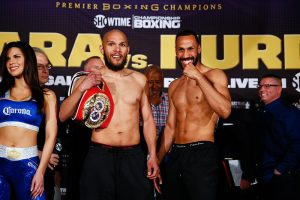 But isn’t that kind of disrespectful? Obviously, every fighter thinks they should win every fight their in. However, DeGale truly looks at Truax as a hurdle that he could clear in his sleep and that the loss was a combination of everything he did wrong rather than Truax doing anything right. Truax didn’t speak much at the press conference but made it clear that his intentions are to head back to his home in Minnesota with the title in his possession.

“I just want to go out and silence the people who said it was a fluke and prove i belong at the top of my division,” Truax said.

But DeGale has doubled down on this fight by saying that it’s win or go home…for good.

“I’m 99% sure that if I lose to Caleb I’ll retire,” he said matter of factly. “I know what was wrong with me and why. I’ll either retire or become a two-time champion.”

The main event has an undercurrent of young lion vs. crafty veteran written all over it. Lara has an impressive resume over the course of his decade long career with names including Canelo Alvarez, Austin Trout, Paul Williams, Ishe Smith, Vanes Martirosyan and others. His style has proven to be a rubix cube that few have figured out. Although he may not be the most exciting fighter to watch, he’s a master of his craft and his technical skill is a byproduct of an exceptional Cuban national amateur team.

Jarrett Hurd is none of the parts that make up Lara. He’s younger, four inches taller, naturally bigger and much more aggressive. Whereas Lara seeks to outpoint his way to a victory, Hurd is all about not allowing the judges to get involved in the decision as evidenced by the seven fights in a row that have ended inside the distance. Make no bones about it, Hurd is looking to be the first to cut short Lara’s night.

“He’s a guy that can’t take pressure fighters and I have the best pressure in the game,” the IBF light middleweight champion explained. “I’m bigger, stronger, taller and longer than him. At the end of the day he can’t run for 12 rounds. With my pressure and my power, everybody gets stopped, including Lara.”

But Lara could care less about what Hurd intends to do. Even the fights he lost were done at his own pace. There are few opponents, if any, who can honestly say that a fight with the Cuban went the way they wanted it to. The current WBA (Super) light middleweight champion welcomes the 27-year-old to try and stop him on Saturday night.

“Everyone knows that I love that pressure style,” Lara said. “I’ve fought better fighters than him and taller. It’s nothing different.”

And things turned up.

“Everyone here talking from Hurd’s team can’t get in the ring with him,” Lara continued. “It’s different once you’re in the ring with me. You’ve never been in a big fight. We’ll find out what you have Saturday night. Right now, you’re all talk.”

Both teams were very vocal and recognize what’s a stake in this title unification bout that will shake out a talented 154-pound division. Hurd fully intends for there to be a changing of the guard on Saturday night and dominate the Cuban like no other opponent has.

“Nobody wanted to fight this guy,” a confident Hurd said. “I stepped up to the table because I know what I can do. He’s living the ‘American Dream’, but my dream has just begun. Saturday night I’m going to show you why nobody can survive 12 rounds with Jarrett Hurd. There’s a storm coming.”