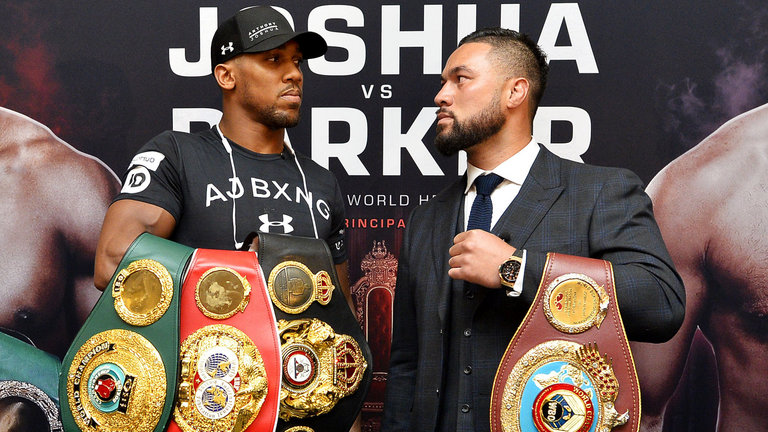 The last time two unbeaten heavyweight titleholders faced off Ronald Reagan was President of the United States, Germany was split into East and West and the Soviet Union was still in existence.

This Saturday, Anthony Joshua, the IBF and WBA heavyweight titleholder, and Joseph Parker, his WBO counterpart, will throw down before approximately 78,000 fans at the Principality Stadium in Cardiff, Wales, and neither man has tasted defeat.

Joshua, who is rated No. 1 by THE RING at heavyweight, turned professional in October 2013 after claiming Olympic gold at London 2012. The colossal Brit won the IBF title by knocking out Charles Martin in less than two rounds and added the vacant WBA belt by getting off the floor to stop former champion Wladimir Klitschko in 11. Last time out, Joshua halted Carlos Takam in 10 to take his record to 20-0 (20 knockouts).

Parker, who is rated No. 3 by THE RING, was a decorated amateur star who turned to the paid ranks in 2012. The hard-hitting New Zealander was rarely tested through his first 21 fights, but he was pushed close in a 12-round majority decision win over Andy Ruiz Jr. Parker (24-0, 18 KOs) claimed the vacant WBO title that night, but he has looked less than convincing in two defenses: Razvan Cojanu (UD12) and Hughie Fury (MD12).

The recent form guide has led to Joshua being installed as a prohibitive 6-1 favorite in a two-horse race. Those odds suggest that the home fighter merely has to turn up, wave to the crowd, show respect during the anthems, smash Parker to bits and make his way home with three belts in the trunk of his car. Will it be that easy? We’ll see, but boxing history is replete with shock results, particularly at heavyweight.

Anyway, presented now are the three other occasions when two unbeaten fighters with a legitimate claim to being king of the glamour division settled their differences: 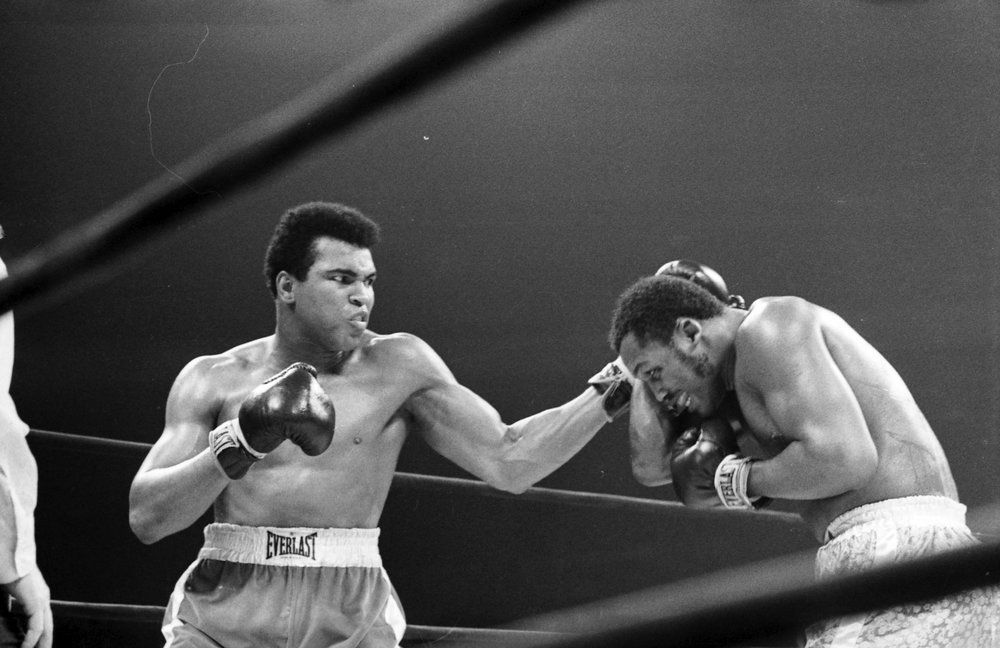 Frazier (right) in action against Ali in fight one. Photo: THE RING Archive

Background: Relax, folks, nobody is comparing. Metaphorically speaking, Ali-Frazier I is The Godfather and Joshua-Parker is Bugsy. The latter is going to be entertaining and make a few dollars, but it isn’t likely to be named a classic of the genre.

In April 1967, Ali was stripped of the heavyweight championship of the world and his license to fight for refusing induction into the armed forces which, at that time, were engaged in the Vietnam war.

Over the next three years, Frazier stakes his claim as the new champion with stoppage victories over Buster Mathis and Jimmy Ellis. However, despite blasting his way through the division, full recognition eludes the Philadelphia powerhouse because much of the boxing world view the deposed Ali as the real champion.

“The Greatest” returns to considerable acclaim in October 1970 and scores back-to-back stoppage wins over Jerry Quarry and Oscar Bonavena. Almost immediately after the Bonavena victory, Ali, still the lineal champion, signs on for a Frazier showdown.

The pair would meet in what was dubbed as “The Fight of the Century” and Frazier proved himself the better man. Ali fought brilliantly, but “Smokin Joe” was on fire at The Garden, solidifying his dominance by hurting Ali on several occasions and knocking him down in the 15th and final round. 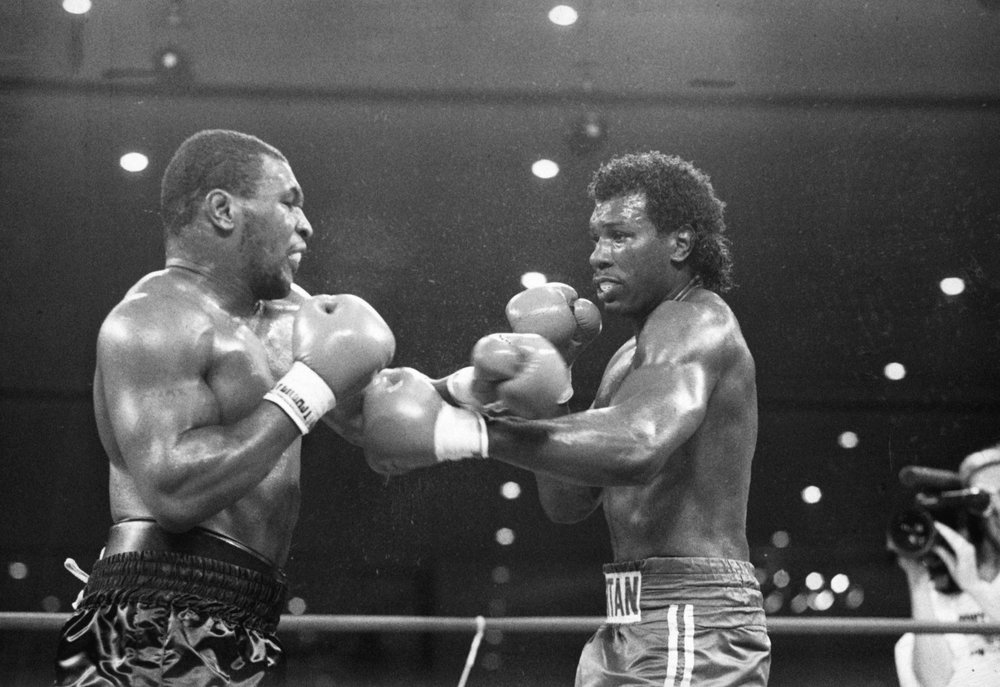 Tyson (left) on the offensive against Tucker. Photo: THE RING Archive

Background: An HBO heavyweight tournament was the brainchild of then-network vice president Seth Abraham and Tyson-Tucker happened to be the final. The elimination format was designed with the specific intention of crowning the first undisputed heavyweight champion since Leon Spinks dethroned Ali in February 1978.

Tyson had smashed his way through Trevor Berbick, James “Bonecrusher” Smith and Pinklon Thomas to emerge as the WBA and WBC heavyweight titleholder and tournament finalist. At 20 years old, the Brooklyn destroyer had become the youngest fighter ever to call himself heavyweight champion (when he defeated Berbick for the WBC belt) and he was now at the peak of his tumultuous reign.

Tucker’s progression to the tournament final was considerably less sparkling. When IBF titleholder Michael Spinks refused to fight the Grand Rapids native in favor of a money-spinning bout with Gerry Cooney, the organization stripped Spinks of their belt. Subsequently, Tucker had to face James “Buster” Douglas for the vacant strap and, despite being less than impressive, he emerged with a 10th-round stoppage.

But he was no match for Tyson. After a bright opening round, during which he rocked the 11-1 betting favorite with a sharp left uppercut, Tucker slowly began to fade. Tyson’s aggression and fierce bodywork took a toll and his opponent quickly resorted to survival tactics. Tucker moved around the perimeter of the ring, tied Tyson up in close and walked him backwards. The underdog was unable to score effectively, however, and dropped a wide points decision.

However, for Tyson, there was still a score to settle. 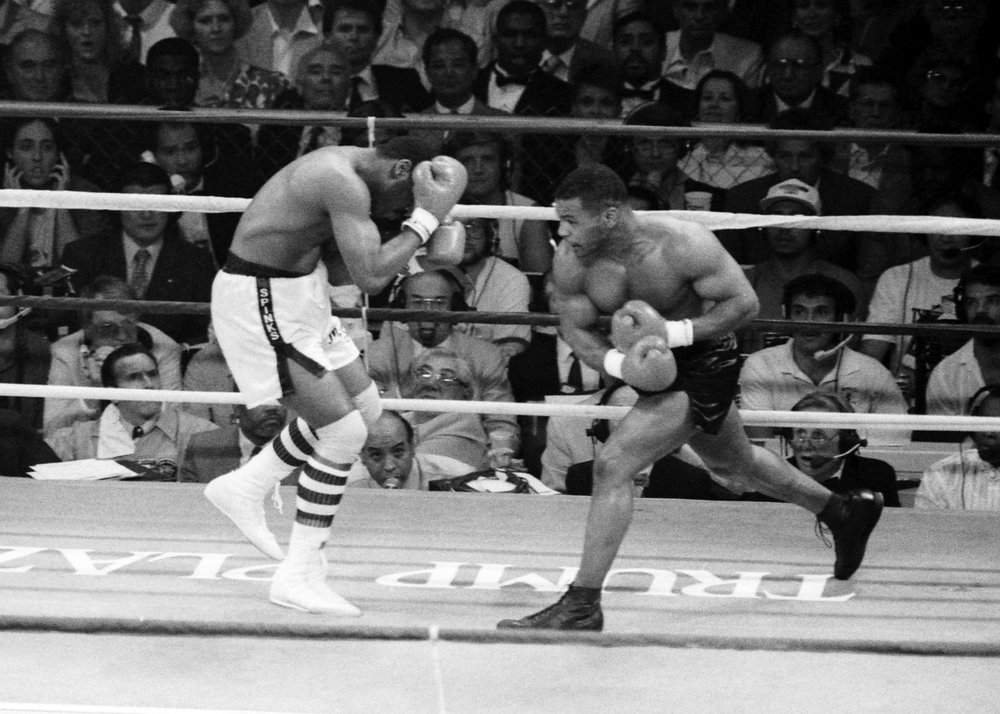 Background: When Spinks exited the HBO tournament, he took THE RING and lineal heavyweight titles with him. Tyson was viewed unanimously as the best fighter on the planet, but a match up with Spinks was now the hottest showdown in world boxing.

Between 1981 and 1985, Spinks had proven himself to be one of the best light heavyweight champions of all time. He won the WBA title from Eddie Mustafa Muhammad, unified the entire division and had notable victories over the likes of Yaqui Lopez, Marvin Johnson and Dwight Muhammad Qawi. The affable St. Louis boxer-puncher was unbeaten and unrivaled.

Such was the breadth of Spinks’ domination at 175 pounds that he made the audacious choice of moving up to heavyweight for a shot at unbeaten champion Larry Holmes. At 48-0, Holmes was just one victory shy of matching Rocky Marciano’s legendary 49-0 tally and Spinks was considered a safe option.

Spinks outpointed Holmes, controversially, in a rematch and then scored stoppage victories over Steffen Tangstad and Cooney.

Surely Tyson would be tested by Spinks when the two came together? Not likely. Spinks entered the ring with the look of a man who had committed himself to jumping the Grand Canyon on a mountain bike. He looked unnerved throughout pre-fight pageantry and 91 seconds after the first bell rang, Spinks lay unconscious following the second of two crushing knockdowns.