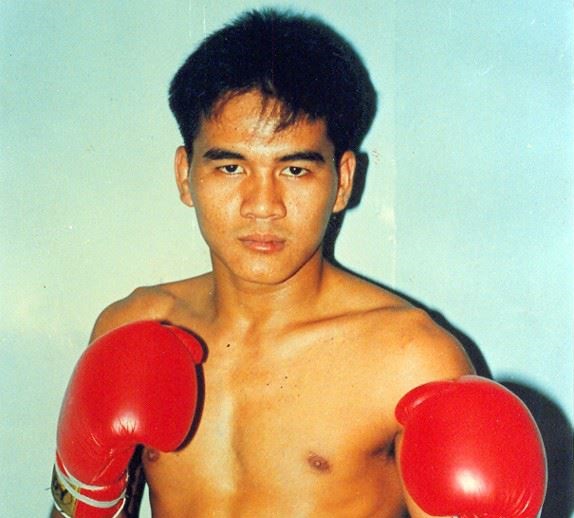 Image courtesy of the WBC
21
Mar
by Anson Wainwright

Muangchai Kittikasem managed to fit a lot into his brief pro career. He become the first boxer from Thailand to win world titles in two weight classes. He was an all-action fighter whose career had peaks and valleys. He was something of a shooting star and when he was at his best, he was spectacular. However on other occasions, his performances dipped significantly.

Kittikasem was born in Chainart, a small town a couple hours north of the capital Bangkok in November 1968. His birth name was Natawut Jantaweemol and he grew up in poverty.

“My parents were farmers,” Kittikasem told RingTV.com through Dr. Siraphop Ratanasuban. “We were very poor, had nothing to eat. The whole family earned $3 (USD) a day, so I turned to Muay Thai and then boxing.”

Kittikasem estimates he had competed in 40 to 50 Muay Thai contests. He made the transition to boxing when a promoter needed a late stand-in.

During his Muay Thai career, he fought at 115 pounds but dropped to 108 as a boxer to gain an advantage. Initially he built experience training with the legendary Sod Chitalada.

Kittikasem made his debut in June 1988, winning a 10-round contest. Incredibly, 11 months later after winning his first six bouts, he met vastly more experienced Tacy Macalos for the IBF junior flyweight title. Kittikasem won a 12-round split decision.

The Filipino exercised his right to a rematch, five months later. This time Kittikasem savaged Macalos in seven rounds.

Kittiksasem made two more defenses in early 1990, before traveling to Phoenix, Arizona, to meet rising star Michael Carbajal. He arrived two weeks prior to the bout to acclimate to his new surroundings.

At the weigh-in, the Thai struggled mightily, needing six attempts to make the 108-pound limit. It proved to be key, as the 1988 Olympic silver medalist had his way with Kittikasem, dropping him four times en route to a seventh round victory.

Kittiksasem was handsomely re-numerated to the tune of ฿5M baht (around $144,000 USD) for making the trip but returned home empty-handed.

Without the title, Kittikasem moved up to flyweight and, after two wins, met his friend Chitalada for the WBC strap. Kittikasem pounded on his countryman, hurting him with a barrage of punches, forcing referee Chuck Hassett to intervene and stop proceedings midway through the sixth round.

For his maiden defense, he traveled to South Korea to face future Hall of Fame inductee Jung-Koo Chang.

Both men fought at a frenetic pace but the Korean struck first, dumping Kittikasem on the canvas twice in the fifth. Both men traded on even terms for the next several rounds, until the 11th when Chang again dropped Kittikasem. Entering the final round, the fight was up for grabs.

The scorecards later reflected the closeness of the bout, each man was ahead on one judge’s card, while the third had it a draw. In the final minute, Kittikasem mounted a final charge, hurting and dropping an exhausted Chang. The game Korean rose but was a spent force, dropped a second time and rescued from himself.

“Jung is easy fight,” Kittikasem stated surprisingly. “Chang is just hard-working boxer, not so skilful to fight, easy fight. I had been training well at that time.”

The relentless pressure fighter turned back tough Mexican Alberto Jimenez by majority decision before revisiting old ground, stopping Chitalada in nine rounds, slightly over a year after their first battle.

Thai power brokers tempted Arbachakov to come to Thailand to face their man nine months later. Despite the humid conditions in an open-air arena in Lop Buri – 93 miles northeast of Bangkok – Arbachakov prevailed by ninth round stoppage.

Kittikasem walked away from boxing. He returned two years later, winning three times before again stepping away, this time for nearly three years.

He retired for good in early-1999 after losing to Shigeru Nakazato at bantamweight. He walked away with a record of 25-4 (17 knockouts).

The proud Thai always felt his career was a team effort and was quick to share his accolades with those closest to him.

“I am so happy for everyone in the team to see me as a champion,” he said. “My promoter Songchai Ratanasuban, my manager Song Karnchanachoosak and the team to support me. They both made me champion, I appreciate them. Every fight is 100 percent, never disappointment.”

Kittikasem, now 49, still lives in Chainart. He is divorced and has two children. He ran a car dealership until 2011 when it was flooded but now owns a small construction company and is running for sub-district mayor in Chainart. Although he isn’t directly involved in boxing any longer, he does attend some fights as a special guest.

SOD CHITALADA: He won many of his fights with his jab alone. The jab helped set up his straight right and his uppercut. He could snap it out very fast or use it as a range finder. Either way it was fast, accurate and it was powerful and it was known for swelling eyes and opening cuts on his opponents’ faces. When he threw his jab to me with a right hand, it was hard and accurate. He used his stick to set up his great combination punching.

ALBERTO JIMENEZ: He stepped around with good rhythm. He is an artist. Like Spiderman, difficult to hit him.

MICHAEL CARBAJAL: He has power both in his left and right hands. I remember he threw eight punch combos all fight. He had incredible endurance. He can get off a couple eight-punch combos in like five seconds.

YURI ARBACHAKOV: His snappy hands and feet constantly confused me. His hands are blazing. He had rapid-fire hands.

ARBACHAKOV: I think I hit him many times and it does not feel like he was getting hurt. I don’t know how he trained so well.

CHITALADA: He is an intelligent fighter. He doesn’t throw counterpunches but he throws counter-combinations. He always times his punches and stays at the right range of his opponents.

CARBAJAL: I remember he is so strong into the late rounds. He is very active.

CARBAJAL: He hits me right on the target and with good combination styles. Michael is so dangerous.

CARBAJAL: He is so smooth. He had a high technique.

CARBAJAL: When I think of the best in everything, I think of Carbajal.