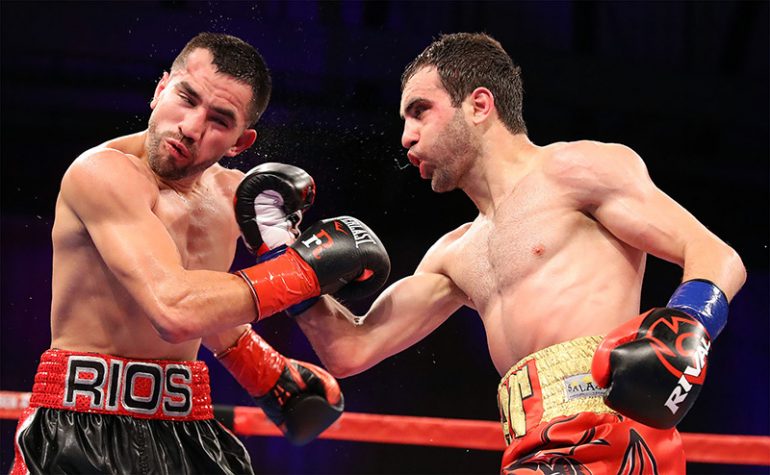 In a crossroads bout between junior featherweight fringe contenders, Azat Hovhannisyan took a major step forward by stopping Ronny Rios in the sixth round on Friday at The Hangar in Costa Mesa, California.

Rios, who entered the fight ranked No. 4 by the WBC and No. 10 by the WBO, was fighting near his hometown of Santa Ana. Hovhannisyan, who was born in Armenia and now resides in the Los Angeles area, entered the bout having won his previous seven bouts.

Both fighters went toe-to-toe during the first two-plus rounds, throwing and landing combinations on the inside, producing great exchanges that thrilled the crowd.

Hovhannisyan stayed aggressive, forcing Rios to open up and fight aggressively as well. The tactic worked for Hovhannisyan as with about 30 seconds left in the third round, a combination followed by a right cross stunned Rios, sending him reeling against the ropes. Hovhannisyan (14-2, 11 KOs) unleashed a wave of lefts and rights to the head, but Rios was able to get through the round.

Rios (29-3, 13 KOs) was able to slow the pace of the fight, but was still receiving numerous counters and crosses to the head.

About 45 seconds into round six, Hovhannisyan landed a counter right cross to the head, dropping Rios to the canvas. Rios beat the count, but took enormous punishment, forcing referee Jack Reiss to stop the bout at 1:12. 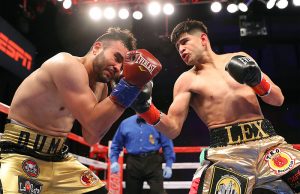 In the co-feature, welterweight Alexis Rocha stopped Miguel Dumas in the opening round.

Rocha (11-0, 8 KOs), the younger brother of Dumas, dropped Dumas with a left uppercut to the head. Dumas beat the count, but was on unsteady legs as action resumed. A barrage of punches followed by a left cross from Rocha dropped Dumas flat on his back, prompting referee Eddie Hernandez to stop the fight at 1:49.

Middleweight Maricela Cornejo (10-2, 3 KOs), who recently signed a promotional contract with Golden Boy Promotions, stopped Lisa Garland (15-10, 8 KOs) at 1:09 of the fourth round.

Francisco A. Salazar has written for Boxingscene.com since September of 2012 and has covered boxing in Southern California and abroad since 2000. Francisco also covers boxing for the Ventura County (Calif.) Star newspaper, RingTV.com, and FightNights.com. He can be reached by email at FSalazarBoxing and on Twitter at FSalazarBoxing