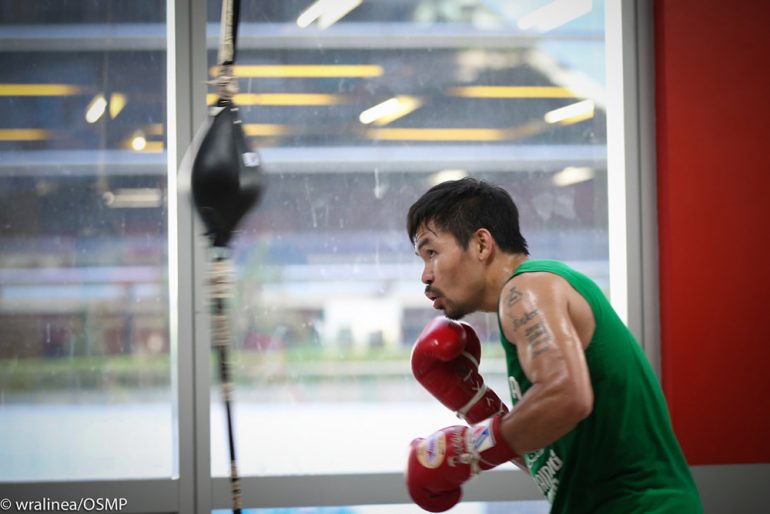 The Filipino senator turned down an opportunity to face Mike Alvarado in the co-feature to Terence Crawford-Jeff Horn on April 14, but now he has a potential date, location and opponent lined up for his return.

The former eight-division titleholder told the Manila Times that he’ll fight Lucas Matthysse on June 24 in Kuala Lumpur, Malaysia, and while there are ongoing talks for that event, there’s no deal yet, despite Pacquiao’s proclamation.

“Manny and his people are hoping that this group in Malaysia come up with the money, the first significant deposit,” Pacquiao’s longtime promoter, Top Rank CEO Bob Arum, told THE RING on Thursday. “If they do, we’ll gear up, I’ll send [Top Rank COO] Brad Jacobs over for the logistics, we’ll put an undercard on.

“As as who he will fight, it will either be Matthysse or maybe Jose Ramirez, if he beats Amir Imam next week. … Because Manny is looking down the road to fight [Vasyl] Lomachenko at 140 pounds, and so he might as well try to win the 140-pound title but Ramirez is no cinch against Amir Imam.”

Top Rank also promotes Ramirez, the 2012 Olympian who will try to earn his first world title. But whether they still promote Pacquiao is another matter. Pacquiao said his company, MP Promotions, would handle the fight amid rumors the future hall of famer has cut ties with Top Rank.

Pacquiao’s longtime manager, Michael Koncz, contacted Golden Boy Promotions president Eric Gomez to secure the services of Matthysse for the fight. “Michael Koncz did contact me and we’re interested,” Gomez told THE RING, “and that’s all I can say.”

A voice message left with Koncz was not returned.

If the fight takes place in Malaysia, it would occur on Sunday morning there, June 24, which would accommodate U.S. television for a Saturday night telecast on June 23.

“I like [Matthysse’s] aggressive fighting style,” said Pacquiao, THE RING’s No. 6 welterweight. “That’s what I want, to entertain the boxing fans. Besides, Matthysse is not a dirty fighter and I highly respect him for that.”

The 39-year-old was likely taking a dig at Horn, who beat him via controversial decision in July, the last time Pacquiao was seen in the ring. Pacquiao (59-7-2, 38 knockouts) dropped his title to Horn during the grueling fight, which featured plenty of headbutts and several deep gashes on Pacman’s face, but a shot at Matthysse would offer him the opportunity to regain a 147-pound title.

Matthysse (39-4, 36 KOs) won the WBA’s secondary title with an eighth-round stoppage of Thai fighter Tewa Kiram in January, though the Argentine wasn’t thriving until the finish. It was the 35-year-old’s first title win after previous defeats to Danny Garcia and Viktor Postol at 140 pounds. He’s now rated No. 8 by THE RING one weight class above.

“It’s a great matchup,” Gomez said. “You have Matthysse, who’s very aggressive — a big puncher. Manny’s a little bit old now, but still a big puncher, but not as quick as he once was. Half of Manny’s still better than most.

“It’s two guys who still want to prove they can fight at a very high level. It’s a very even match.”

Now, it’s up to the group in Malaysia to deliver the necessary funds to make Pacquiao-Matthysse a reality.