Kell Brook: ‘Sergey Rabchenko is a dangerous guy and he can really bang’ 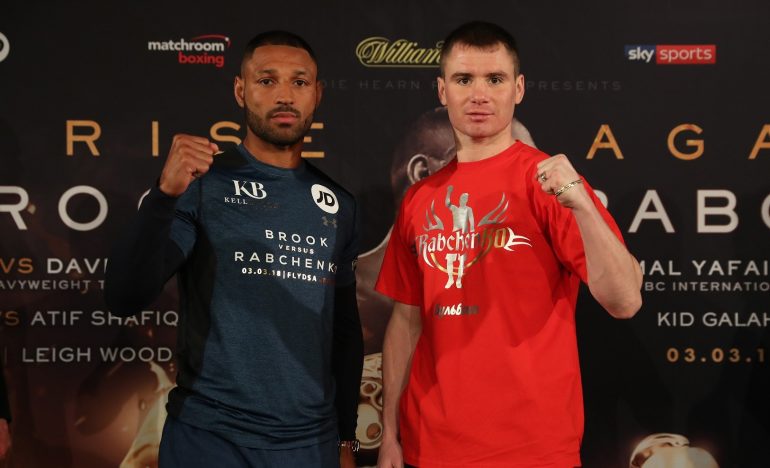 Kell Brook has admitted that his loss to Errol Spence Jr. was the lowest point in his career but he’s back in love with boxing and ready to take on Sergey Rabchenko in a 12-round junior middleweight bout at the FlyDSA Arena in Sheffield, England, on Saturday.

Brook surrendered his IBF welterweight title to Spence when he was stopped in 11 rounds last May. The Englishman sustained a fracture to his left eye socket in the bout which, ironically, was the same injury he received to the right side when he was stopped by unified middleweight titleholder Gennady Golovkin in September 2016.

“I’m not used to losing but I’ve had two (losses) in a row,” said Brook (36-2, 25 knockouts). “The first one I jumped up to middleweight from welterweight against the most feared man in world boxing, so you can’t really take that as a loss as it wasn’t my natural weight.

“Losing to Spence is a different kettle of fish. That really hurt me badly; it took me a long time to get over that. People are right to question what I’ve got left and how I am going to be after the injuries and the defeats, but I believe I’ll be better with the bigger weight.

“I’m built to box. I’ll be fresher at (junior middleweight) and I won’t be drained like I was at 147. Being IBF champion also meant I was having to weigh-in again the next morning with the 10-pound limit, so it was like I was fighting the scales twice and then fighting my opponent.

“Rabchenko is a dangerous guy, he’s no mug and he can really bang. I’ve sparred with him and it’s going to be one hell of a fight. I’m loving boxing again and things can change. I still feel that I’ve got big fights left in me before I call it a day. I’d love to win a world title at (junior middleweight).”

Brook has been given medical clearance to fight Rabchenko (29-2, 22 KOs) who is a career-long junior middleweight and a former European champion.

The fight will be televised in the U.K. on Sky Sports Main Event and Sky Sports Action from 7:30 p.m.