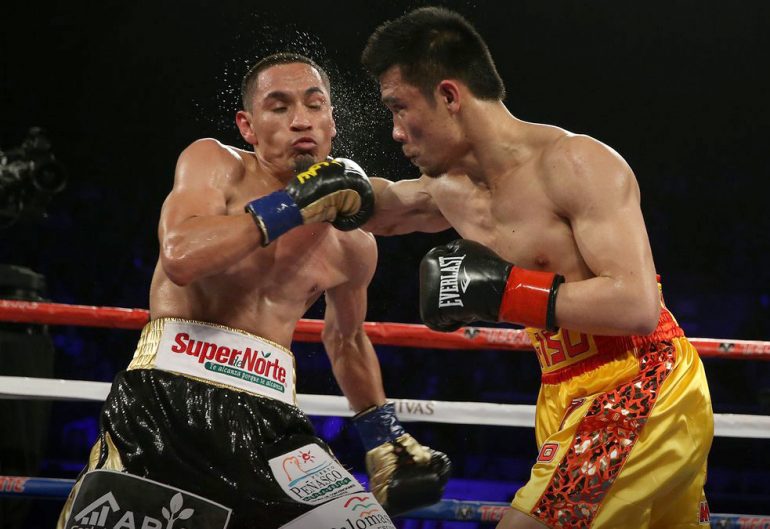 The unheralded Thai junior bantamweight won the WBC title with that 12-round Fight-of-the-Year candidate, defended it with a brutal knockout of Gonzalez in an immediate rematch, and with his rousing effort against Estrada on Saturday at The Forum in Inglewood, California, Sor Rungvisai earned THE RING’s vacant 115-pound championship belt.

The 31-year-old southpaw, who was forced to mix some craft and ring generalship in with his usual power-punching aggression against the courageous Mexican technician, also elevated his status within THE RING’s mythical rankings.

Sor Rungvisai (45-4-1, 45 knockouts) jumped from No. 10 to No. 7 in the magazine’s pound-for-pound list on the strength of his last three bouts (all of which took place in the U.S. and were televised on HBO, raising his stature among American boxing fans). However, his advance did not come without a lot of debate among THE RING’s Ratings Panel. Some members wanted to advance him a lot higher than No. 7; others still aren’t convinced that he’s an elite boxer.

Anson Wainwright, an early supporter of Sor Rungvisai, suggested moving him up one spot. Adam Abramowitz, a newcomer to the Panel but not one to be shy about his opinions, advocated for a much bolder move. 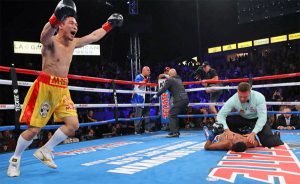 “I think Sor Rungvisai belongs at No. 1 pound for pound,” Abramowitz said. “No one at the top level has wins as good as he does over the caliber of opposition, wins over two pound-for-pound top 10 fighters. He knocked out the guy who was at No. 1 (Gonzalez). I’d take his wins over anyone else’s.

“One further point, I know Estrada isn’t currently ranked the pound-for-pound top 10 by THE RING, but he is by other rankings groups out there. Either way, defeating Roman and Estrada is much better than No. 9 pound for pound. Interested to hear your thoughts.”

Members of the Panel and Editorial Board obliged Mr. Abramowitz.

“Srisaket has better wins than (Naoya) Inoue, (Errol) Spence and (Guillermo) Rigondeaux hasn’t had a top win in years. He should jump to No. 7 at the very least in my opinion,” said Rian Scalia.

Tom Gray, an unabashed campaigner for the emerging Thai hero, was passionate in his support of Sor Rungvisai’s pound-for-pound promotion. 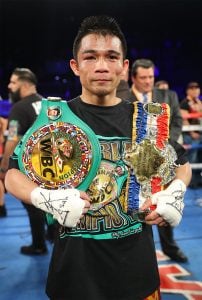 “I’d have Sor Rungvisai at No. 4, said THE RING’s associate editor. “Here’s my case: The Thai power-puncher is coming off the three best back-to-back victories in world boxing. ‘Oh, but he lost the first Gonzalez fight!’ No, actually he didn’t, he won it, and that’s the reason I picked him the second time. And even if you thought he lost, there was nothing in the scoring. In any case, Chocolatito’s ears are still ringing from the rematch and Sor Rungvisai just outpointed one of the finest technicians in the sport. And he’s the first ever RING magazine champion at 115 pounds, arguably the best division in boxing. Let’s compare that to his contemporaries: Rigo, whose inclusion at this point is hilarious; Spence, a potential superstar but nowhere near in terms of resume; Inoue, see Spence; Garcia, conquering the weights, but does his victim list really equal Sor Rungvisai’s? Canelo, a great fighter but coming off a draw that most believe he didn’t deserve, and Kovalev. What the hell is he doing at No. 4?

“The argument that Sor Rungvisai wins because he’s big is a case of ‘dry your eyes, mate.’ I picked Estrada and I got it wrong. Sor Rungvisai makes weight, rehydrates and punches people’s teeth in. If these guys are too small, then they should raise the white flag and move down in weight.

“Let me put this two ways: If Sor Rungvisai beats Estrada again, he has the resume of a pound-for-pound No. 1. AND, if this kid had his face on a cereal box (rather than a past which includes eating out of a dustbin in a Thai ghetto or feasting on rats) we would identify with him more and have him higher. The guy is kicking ass wherever he goes and this run is pure throwback. Reward him for that.”

However, Sor Rungvisai’s victory over Estrada was a little bit too close – perhaps even controversial – for Brian Harty to sign off on his advancing into the pound-for-pound top five. 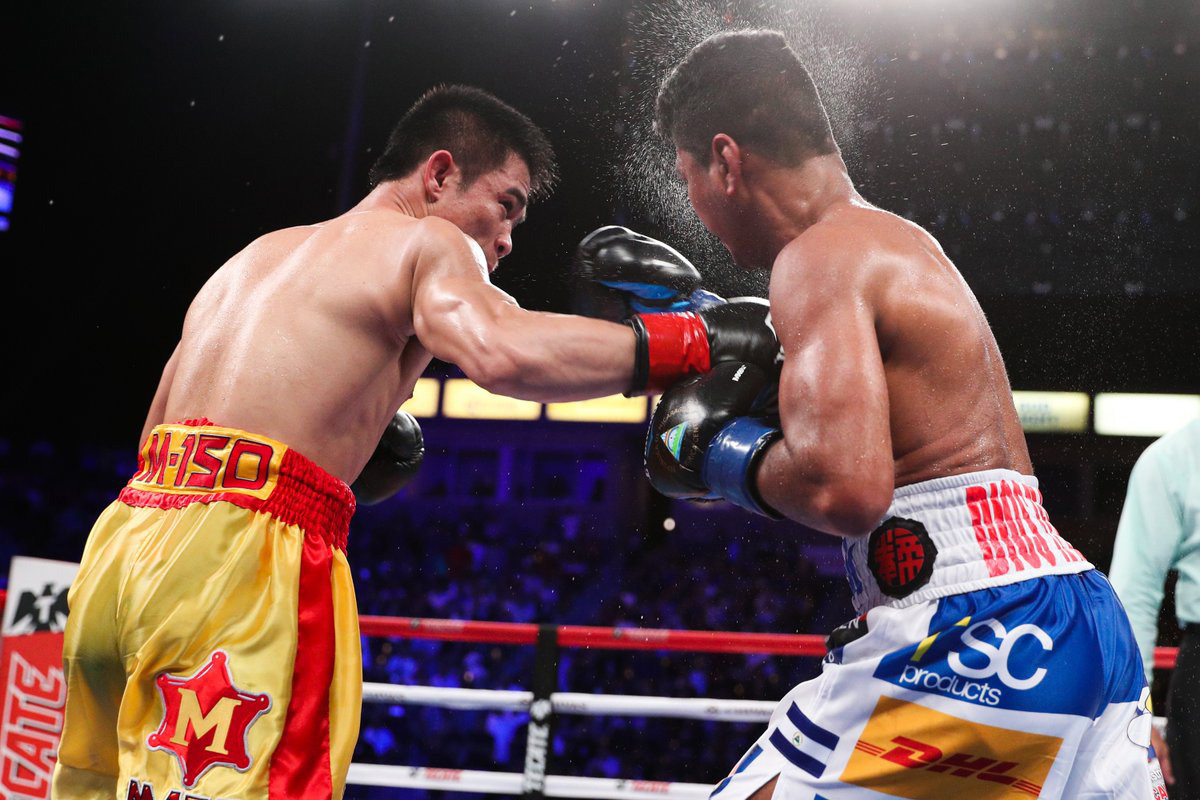 or minus one round either way or a draw,” said THE RING’s managing editor. “I saw this as a repeat of Sor Rungvisai-Gonzalez I: At some point very early on, Sor Rungvisai believed he couldn’t be hurt and his opponent realized he was facing outrageous power. So, one fighter walked forward with no fear and the other stayed on the outside to avoid getting KO’d. And still Estrada had his way with him in the 12th, and to a lesser degree some other rounds. It was hard to tell how hurt Sor Rungvisai was in the final round – probably not critically, though he’s fortunate for the 12-round limit. Estrada also lost rounds of course. I think it was a really good, close contest. Sor Rungvisai is an elite fighter, but his game relies too much on juggernaut tactics for me to say he has more transcendent pound-for-pound skills like Inoue, even after his last three wins.

“For the same reason, I think there’s no way in hell Kovalev belongs at No. 4, or that Wlad ever should’ve been even mentioned for No. 1, despite his resume. Not to completely ignore results or that power is a legit pound-for-pound criterion, though; I think Sor Rungvisai definitely jumps Rigo and could go either way on Spence because his resume is so limited, but I lean toward no. Not Inoue. I’d love to see Sor Rungvisai vs. (WBO bantamweight titleholder Zolani Tete).”

“I agree with Brian, Kovalev is far too high,” said Mike Coppinger. “We have to keep in mind that pound for pound isn’t just based on results, like divisional ratings – it’s more subjective. I do believe Sor Rungvisai deserves to move up, but not past Spence. I’d be cool with swapping him with Rigo or even past Inoue.”

“I am with Brian, love me some SSR but not more than Inoue and with pound for pound there are different criteria such as no one even getting close to pushing Inoue towards an even contest yet,” said Marty Mulcahey.

John Evans, like Scalia, suggested moving Sor Rungvisai to No. 7, which seems like a good middle ground between the opinions of Abramowitz and Gray and the others. 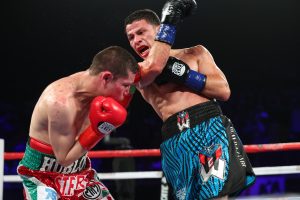 Arroyo takes it to Cuadras.

No. 2-rated junior bantamweight Sor Rungvisai is now THE RING champ. No. 4-rated Carlos Cuadras was upset by former flyweight contender McWilliams Arroyo in a 10-round bout under the Sor Rungvisai-Estrada fight. Estrada, who was rated No. 3, advanced to No. 2 on the strength of his bold and versatile performance against the new champ. Arroyo enters the rankings at No. 7 and Cuadras, who has last three of his last four bouts (but all to top opposition) drops to No. 8.

No. 1-rated flyweight Donnie Nietes solidified his top position with an impressive boxing performance and stoppage of No. 3-rated Juan Carlos Reveco in the seventh round of their IBF title bout on the Sor Rungvisai-Estrada undercard. Also on the “SuperFly2” undercard, No. 9-rated Artem Dalakian earned the vacant WBA title with a dominant decision over No. 10-rated Brian Viloria. Reveco and Viloria drop from the rankings. Dalakian takes Reveco’s No. 3 spot and Muhammad Waseem enters at No. 10.