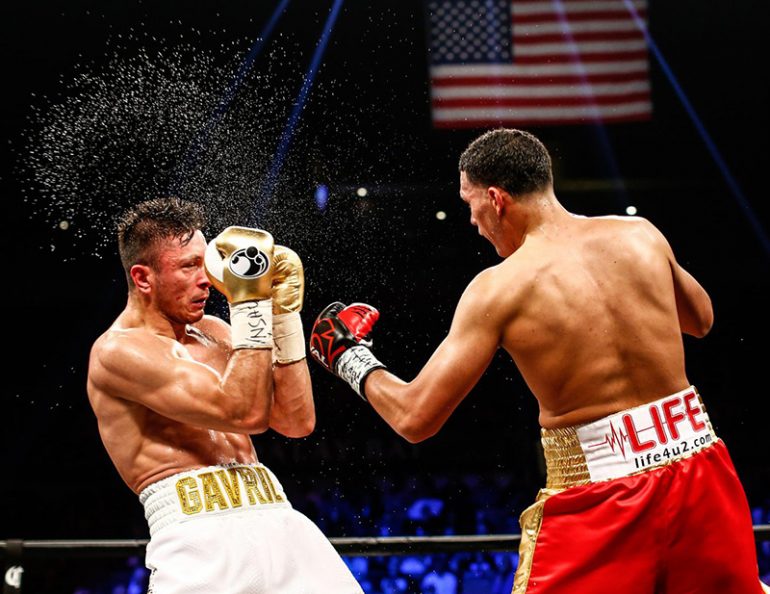 David Benavidez lands an uppercut to the iron chin of Ronald Gavril. Photo by Stephanie Trapp-SHOWTIME
17
Feb
by Andreas Hale

LAS VEGAS, Nevada — In a rematch of an excellent 2017 scrap, David Benavidez made sure there were no questions with a sound thumping of Ronald Gavril as he defended his WBC 168-pound belt with a 12-round unanimous decision in the co-featured bout on the Danny Garcia vs. Brandon Rios fight card at the Mandalay Bay Event Center.

In their first encounter, Gavril thrived in the later rounds and scored a 12th-round knockdown in a fight that few expected him to be competitive in. He would lose a split decision that could have gone either way but there was thoughts that Gavril may have the formula to hand the champion his first loss.

This go around, the younger and stronger Benavidez (20-0, 17 knockouts) refused to ever allow Gavril into the fight and delivered a one-sided beating to his opponent in a decision that was never in doubt.

Benavidez had a measured approach early on as he sought to establish his presence early by staying busy but not exhausting himself. Gavril (18-3, 14 KOs) caught many of the punches on his arm but didn’t offer much in return during the early rounds.

With Gavril’s hesitancy in mind, Benavidez cranked up the output in the third knowing that Gavril had done little to get him off his square. He extended the jab and would routinely put together combinations that amplified his reach advantage.

If it was Gavril’s hope that his opponent would slow down like he did in their last encounter, he was wrong.

An uppercut hook combination badly rattled Gavril in the fourth and Benavidez went to work ripping to the body and head with hooks and power shots as he sought to close the fight. However, the iron will of Gavril saw him recover quickly but certainly had a stamp placed on his opponent.

As the fight progressed, every time Gavril tried to rally, Benavidez would be right there to extinguish any thoughts of a comeback with a hard counter or a powerful combination.

By the sixth, it was evident that every combination that Benavidez landed was sapping the confidence out of Gavril. With Gavril’s face falling apart in the 8th, the 21-year-old cranked up the pressure another degree and tore further into the Romanian’s soul with thudding body shots and combinations that tore off layers of Gavril’s boxing career.

With the victory in hand and Gavril clearly in this for the long haul, Benavidez took his foot off the gas but did enough to pitch a near shutout on all three scorecards with scores of 119-109, 120-108 and 120-108.

Now that the chapter is closed, it will be interesting to see if there’s anybody who can deal with Benavidez’ power and hand speed.

After controlling much of the round, Ugas connected and dropped Robinson with a counter right hook. That punch put Robinson on notice and forced him to respect the power, despite Ugas entering the fight with only nine knockouts in 23 fights.

It was Ugas’ fight to lose as he would control the exchanges with more accurate punches and kept his guard up whenever Robinson decided to fire back.

A wild exchange at the end fourth saw both fighters swinging after the bell. But it was Robinson who launched a right hand that dropped Ugas after the bell who was docked a point. But that point ended up being moot when Ugas sank Robinson again in the 7th round with a lunging right hand to the temple. Robinson managed to get to his feet but was clearly on shaky legs as Ugas closed the show with a barrage of punches that caused referee Robert Byrd to rescue him at the 1:05 mark.