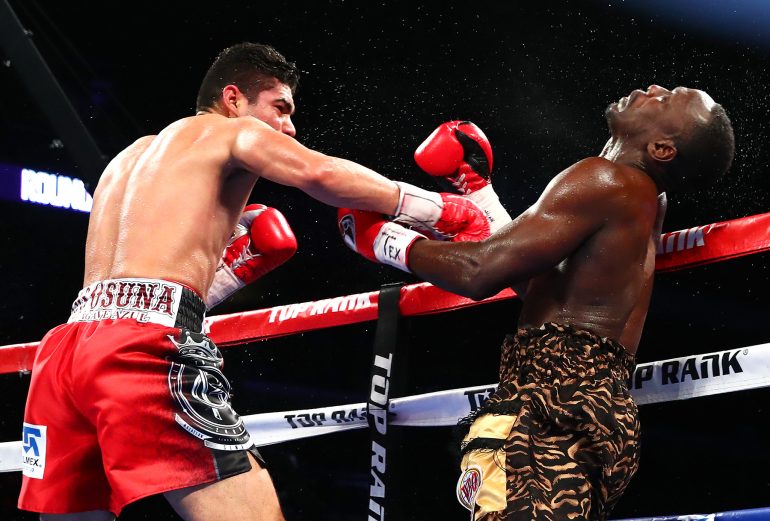 Top Rank owns an incredible platform to air world-class boxing with its series on ESPN.

Unfortunately, Saturday’s main event was anything but.

Sure, Gilberto Ramirez is a world-class fighter, THE RING’s No. 1 super middleweight. And he fought according to form, with a sixth-round stoppage of Habib Ahmed, a previously unknown fighter.

It was an utter mismatch from the opening bell, from the size disparity to the skill department. Ahmed looked like a capable fighter, but he was unable to land any shots of consequence on the man with the four-and-a-half inch height advantage.

It led to non-stop pressure from Ramirez, who battered Ahmed with an array of shots until Ahmed’s corner finally stopped the contest at 2:31 of Round 6.

Ramirez (37-0, 25 knockouts) retained his WBO super middleweight title with the victory at American Bank Center in Corpus Christi, Texas, and now, he waits for someone to emerge from the World Boxing Super Series.

“I would like to fight anybody for unification with all the other champions in Europe or England — wherever,” Ramirez said. “I’m ready for everybody, I’m ready to keep my belt. The winner of the tournemane, Bob Arum can make that fight. I want to be the best in the division, a pound-for-pound fighter, and I need to fight with the best.”

A clash of heads created a gash over Ramirez’s left eye in Round 3, but it didn’t matter. The Mexican continued to unleash a variety of punches on the Ghana native, who was game but overmatched.

Ahmed (25-1-1, 17 KOs) sought to counter off the back foot, and he was able to a few times, but the punches didn’t even faze Ramirez. He was unable to close distance on Ramirez, and with the strength disadvantage he faced, fighting on the inside wasn’t a great option, either.

“Zurdo” stunned Ahmed with a volley of punches in Round 4, and dished out a beating over the next two rounds, with referee Laurence Cole keeping a close eye, and really, he could have stopped it at any time.

So now, Ramirez, and boxing fans, wait — and hope — to finally see him mix it up with someone who can match him, and that fighter should be free come May when the WBSS concludes.