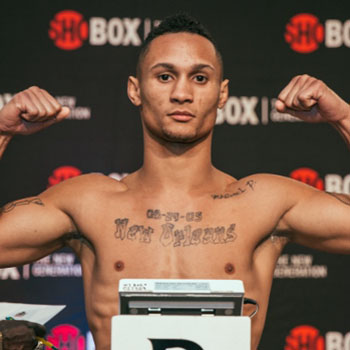 Regis Prograis, a budding talent whose explosive power made waves on ShoBox, is stepping up to the championship level.

Lou DiBella, who promotes Prograis, told RingTV.com that a deal was struck Wednesday night to pit Prograis (20-0, 17 knockouts) against Viktor Postol and avoid a purse bid scheduled for Thursday. The junior welterweight fight will be televised on Showtime, but there’s no date or site set yet.

Prograis, THE RING’s No. 4 junior welterweight, scored a career-best victory in his last outing, a ShoBox battle against fellow undefeated fighter Joel Diaz Jr. It was supposed to be a test for Prograis, but the Houston-based boxed ripped through Diaz with four knockdowns in Round 2 en route to the stoppage later that frame.

With the 28-year-old’s blend of speed, power and athleticism, he’s a fighter on the rise, but Postol (RING No. 2) is the kind of tested and skilled veteran who can truly show us just how good Prograis is.

Postol (29-1, 12 KOs) doesn’t have a lot of knockouts in his 30 pro fights, but his two biggest victories came in vicious fashion. First, Postol scored a brutal KO of Selcuk Aydin in his HBO debut in May 2014. And then in October 2015, Postol scored an upset with a knockout of Lucas Matthysse, fracturing the Argentine’s orbital bone in the process.

That win netted Postol a 140-pound title, but he lost the belt via lopsided decision to Terence Crawford.

Now, the 34-year-old Ukranian is ready to return to American television and another challenge. And we’ll all find out just what Prograis has.