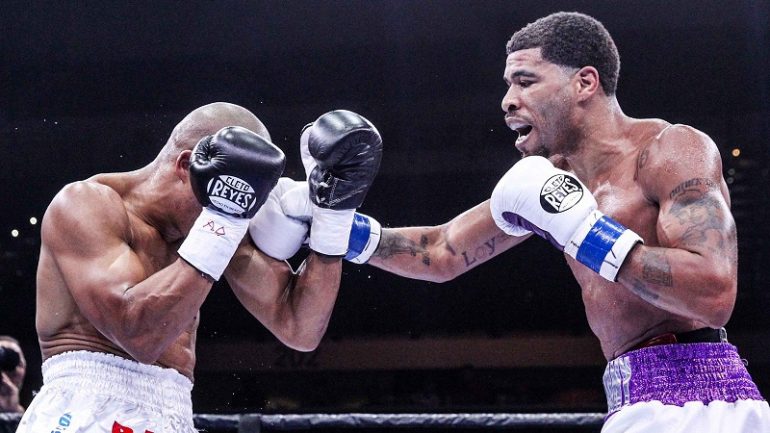 He may be the most patient man in boxing, Anthony Peterson.

Now being the “best” in anything in the boxing sphere is praise-worthy, typically…but in this sphere, where so much of it is free form, with deals being hammered out and, oftentimes, with the loudest and most persuasive voice in the room being awarded with a lion’s share, being patient isn’t always useful.

Peterson, though, isn’t about to change his ways. He got bit in the butt back in 2010, when Humberto Soto pulled out in the 11th hour, before they were set to rumble at Yankee Stadium, underneath the Miguel Cotto-Yuri Foreman main event. Back then, Anthony was promoted by Top Rank. He felt stung by the swerve then and lamented that he’d waited five-and-a-half years for such a shot. Fast forward: It is 2018 and Peterson, who holds a 37-1 (with 21 knockouts) record, is still waiting. But he’s not lamenting; he’s not whining. He’s not taking to social media to put this one and that one on blast. Instead, he’s putting his energy into his workouts and told me he is still hopeful that 2018 will be the year he gets a title shot, and a payoff to all these years of prizefighting.

The 32-year-old Peterson will be gloving up Saturday, January 20, at Barclays Center, fighting Luis Eduardo Flores (23-8, 19 KOs) on the undercard of an event topped by Errol Spence’s Jr’s IBF 147-pound title defense, against Lamont Peterson, aka big bro.

“I know a little bit about (Flores) I was watching his fight against Jamel Herring and I saw what I needed to see,” said Anthony, who shares the same trainer with Lamont, that being Barry Hunter. “He’s a tall guy, throws wide shots.”

Anthony’s tone of voice was measured, polite, super-chill, really. You didn’t get the sense this is an excitable type, same for when I asked him about those layoffs, about not fighting in 2012, once in 2013, once in 2016, not at all in 2017…

“Boxing is a business. You can’t put a finger on it, the real reasons…it’s the business of the game,” he stated. He didn’t offer offer up reasons about the inactivity or play the blame game. “I mean, I could soon be fighting for three different titles and that would be beautiful. Till that happens, I keep the faith. And am I close to getting a title shot? I don’t know; it’s boxing. I just don’t know.”

The rug got yanked out on Anthony last summer, when he was set to fight Mickey Bey. (It would be a big step back up the ladder and he’d be able to put a 2010 loss to Brandon Rios way, way back in the rear view mirror. That had been a bummer, as his repeatedly straying low led to him being disqualified.) A couple weeks before the August 22, 2017, bout, Mickey Bey pulled out, because of an injury.

Anthony hasn’t lost sharpness because his outings have been infrequent, he continued. “I added a few things but have pretty much the same style. I’m smarter, more patient. I take and give a better shot.” And through it all, he seems to have maintained a polar cool. “I’m not pointing a finger at anyone. I keep it moving. No bitterness. I’m never on social media, verbally bashing, on boxing or about this world, period. And do people tell me to stir the pot? People do this but it’s not in my nature. I’m nice but every nice guy has a flipside. In all 38 fights, I’ve wanted to go in and hurt the guy. It’s the hurt business but, at the end of of the day, when the rewards are in my lap, I will have my say. It wouldn’t matter (if I wailed on social media or to press). Who would listen? Whatever I say, nobody really cares. It’s pointless to worry about something you can’t change. Everyone would rather listen to a winner.”

Yes, he admits, when prodded, he has been frustrated at times. Never enough to look at his bro and feel a nasty envy, he told me, but “it’s frustrating…but it’s about how much I love boxing and how much do I want it. I’ve waited and I will wait two more years if I got to.” He’s simply happy that Lamont has gotten chances to snag titles and, come Saturday, he will be ringside to cheer his bro on. “I keep my faith in God, keep it moving. And I have a life outside boxing. I like to see people laugh.” He goes to comedy shows and you can see his comedic side on his Instagram account, he told me.

No chuckling now, as we count down to the Petersons’ fight night. Does he have a prediction? “For all my fights, I’m always thinking knockout. It’s nothing personal but I like to get ‘em out in the first and be done with it. The first, the second, if it comes. As for Lamont, I see a late stoppage, 10th or 11th round TKO. What will do it for him over Spence? The experience, the comfort level, by this time, you’ve almost seen everything. But all fights are fought in the ring. We will see, come Saturday.”

“I’m hoping and praying,” said boxing’s most patient fighter, Anthony Peterson. And, but of course, punching. Because without that, the first two alone will leave him on the outside looking in…and, he says, politely, he’s been there and he’s over it.