Naoya Inoue: ‘I think I will move up to bantamweight in 2018’ 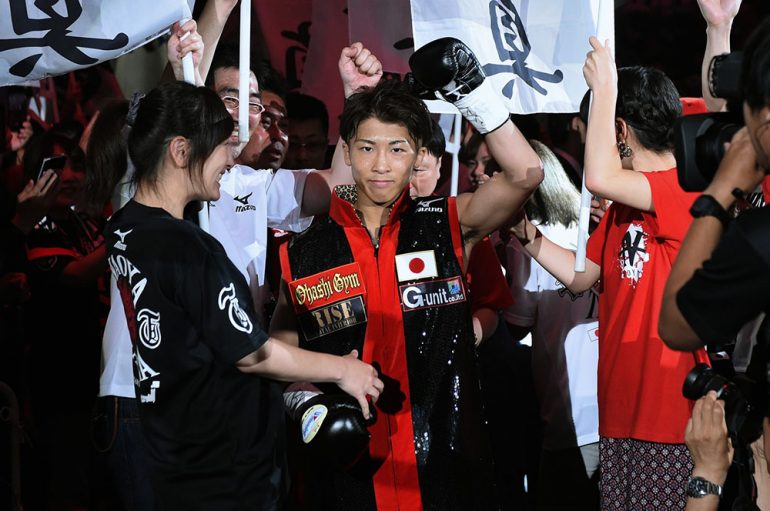 Hardcore fans are torn by Naoya Inoue's announcement that he will move from the 115-pound division to the 118-pound weight class. Photo by Naoki Fukuda
27
Dec
by Anson Wainwright

Japanese superstar Naoya Inoue will look to bring the curtain down on a successful 2017 when he defends his WBO junior bantamweight title against Yoan Boyeaux in Yokohama, on Saturday.

Inoue, who is rated No. 1 by THE RING at 115 pounds, will be making the sixth defense of the belt he won three years ago with an eye-catching second-round knockout of Omar Narvaez. Once again, the fighter known as “Monster” is expected to retain his title, but he remains fully focused on the task at hand.

“I will brace my nerves for the bout with (Boyeaux) since he is on a hot streak of 30 consecutive wins,” Inoue told RingTV.com through Tomoyuki Kataoka. “He has a good boxing style. He actively attacks and hits hard so I expect us to attack each other in the early rounds.”

Boyeaux (41-4, 26 knockouts) will be Inoue’s third fight of the year. In May, he dispatched Ricardo Rodriguez in three rounds before making a successful U.S. debut on the hugely popular “SuperFly” card in September. Inoue stopped the overmatched Antonio Nieves in six.

“This year has been a very good one for me so far,” said the 24-year-old power-puncher. “I would like to win against Boyeaux to make 2017 the best one so far.”

Inoue (14-0, 12 KOs) impressed against Nieves and enjoyed the opportunity afforded him on HBO. “I could feel the atmosphere at the fight,” he said. “I instantly developed my love of fighting in the U.S.”

Recently, Tom Loeffler announced that “SuperFly 2” would take place on February 24 in Los Angeles. All going well, Inoue has said that he would like to be a part of that promotion, but weight is now a serious factor.

“I think I will move up to bantamweight in 2018,” he admitted. “My weight prior to training for a bout is generally eight kilograms [17.6 pounds] over the junior bantamweight limit. However, because of my continuous training, I have maintained my physical condition since the last fight.”

Inoue’s mentor, Hideyuki Ohashi, also feels a move up in weight is imminent.

While there are plenty of attractive challenges at junior bantamweight, it appears Inoue’s future is at 118 pounds where the likes of Shinsuke Yamanaka, Ryan Burnett, Zolani Tete and Luis Nery await him.