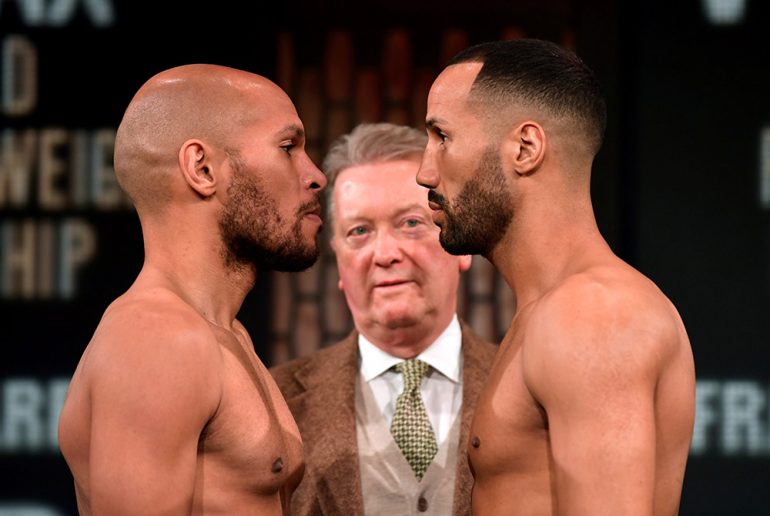 Boxers know what we fans know but with extra oomph: Judges often don’t see things like everyone else saw them and that the best way to deal with this dilemma is to remove them from the equation.

Barring that, the fighters are there, nearly naked, chests heaving, a million miles away stares on their visages, waiting to hear if they got it right…or if they got screwed.

Caleb Truax was in hurry-up-and-wait mode Saturday in London, after he’d outboxed heavy favorite James DeGale…or, at least, in his mind and the minds of most who watched the defense of the IBF super middleweight title.

He waited…and I wondered…did he think he’d get the nod (from three judges, one from England, one from Florida, and one from Canada)?
“I thought I won the fight wider but, once they announced 115-112, I knew I had it,” said the Minnesota-bred boxer, now sporting a 29-3-2 (with 18 knockouts) record to go with his IBF strap.  “No way (DeGale) won a round 10-8.

So, now he can tell us…What was the game plan? “Applied that smart pressure I talked about and didn’t give him any space to box. Once I got my punches to the target, I started digging more and coming with power shots,” Truax told RingTV.com.

I wondered before if maybe DeGale had left pieces of himself in that Brooklyn ring from the most recent bout he undertook, against Badou Jack (in January).

To that end, I asked Truax, who’d come in 3-2 in his last five,  if he had hoped DeGale had been diminished?

“I hoped he’d be at his best because I knew I could beat him either way. I was confident, composed and ready for a DeGale (age 31) who has eight good right arms. It didn’t matter to me.”

Not to even mention the fact that, just three fights ago, Anthony Dirrell had connected with right hands and dropped and stopped Truax when they collided. Yes, it wouldn’t be overstating it to say Truax’s career was on the line in London at Copper Box.

And word was that DeGale and Company, including promoter Frank Warren, were making those best laid plans for next during fight week? “All week,” Truax said. “Even at the press conference right in front of me. (WBC titlist David) Benavidez, (WBA beltholder George) Groves, (Chris) Eubank (Jr.), 2018 stadium fights, that’s all I heard. Didn’t say sh*t about the fight that was two days away.”

I wanted to let Truax go, let him enjoy some London sightseeing, being that he was staying an extra couple days to soak it up…so, final question: Was this karma?