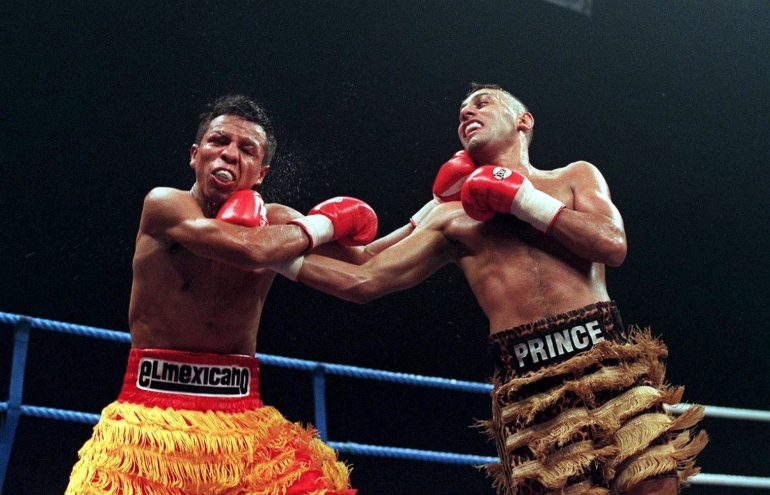 Manuel Medina would never be hailed as the most consistent fighter in the world, but he more than made up for that with his persistence and resilience, winning a version of the featherweight world title on a record five occasions.

Just when you wrote off the Mexican warhorse, he dutifully came back and surprised you with an unlikely win.

Medina, was born on March 30, 1971, in the small town of Tecuala in the state of Nayarit. His early years were very tough and, like many Mexican fighters, he took up boxing at a young age.

“Very difficult. I had to work, train and fight,” Medina told RingTV.com through Michel Soloman. “I started working at 12 years old and would get jumped by kids who would steal my money because they knew I worked. So that is why I started boxing.”

By now Medina was living in the border town of Tijuana. He turned professional at just 14 years old in the fall of 1985.

Over the next several years, the young fighter gained valuable experience and moved his way up the ladder. There were defeats, but they helped mold “Mantecas” who bested former titleholder Steve Cruz in July 1990 to move his record to 36-3.

Four more victories followed before Medina was rewarded with his first world title opportunity against IBF belt holder Troy Dorsey. Despite a torrid start that saw the Mexican floored in the second round, he worked his way back into the fight and won a close but unanimous 12-round decision.

Medina made four successful defenses of his featherweight title. He defeated American Tom Johnson by technical decision before venturing to Europe to post wins over Fabrice Benichou, Fabrizio Cappai and Moussa Sangere. However, in early 1993, Medina lost the title to Johnson by split decision in a rematch.

Prior to his title run, Medina had operated at 130 pounds. He briefly moved back to that division but dropped a unanimous decision to IBF titleholder John John Molina.

In January 1995, Medina met Johnson in a rubber match and after 12 rounds, Johnson retained his title by split decision.

Consequently, most experts wrote Medina off when he met burgeoning star Alejandro Gonzalez for the WBC title in September 1995. But Medina, not for the last time, upset the apple cart, edging a close fight by split decision. Unfortunately, however, the Mexican technician would lose in his first defense to Luisito Espinosa.

The following summer, Medina was selected as challenger for the enigmatic WBO titleholder, Prince Naseem Hamed. The pair faced off in Dublin, Northern Ireland, and Medina’s herky-jerky style troubled the champion, who later revealed that he had a flu. However, Hamed’s power still proved decisive. The challenger rose from three knockdowns before being pulled out at the end of the 11th.

Medina lost twice in 1998; first by technical decision to Espinosa in a rematch for the WBC title and then by knockout at the hands of Floridian southpaw Derrick Gainer.

With many writing him off and his prime behind him, Medina challenged newly minted IBF featherweight titleholder Hector Lizarraga. Despite fighting in Lizarraga’s home region of Northern California, the Mexican star shocked the younger man to claim a third world title by unanimous decision.

Medina turned back the challenge of Victor Polo before heading to the U.K. to face Paul Ingle. Both men touched down but the plucky Brit managed to relieve Medina of the title by hard-fought decision.

The IBF title passed from Ingle to Mbulelo Botile, who in turn lost it to former opponent Frankie Toledo. Making a habit of tearing up the script, Medina challenged Toledo and duly stopped the American to win a fourth title.

Again, the reign didn’t last long. He lost his championship to the superb Johnny Tapia by majority decision, but that was a fight many felt Medina deserved to win.

Several months later, after Tapia was stripped of the title for fighting Marco Antonio Barrera, Medina faced Juan Manuel Marquez for the vacant IBF title. Marquez cut up and beat up his countryman before stopping him in seven rounds. 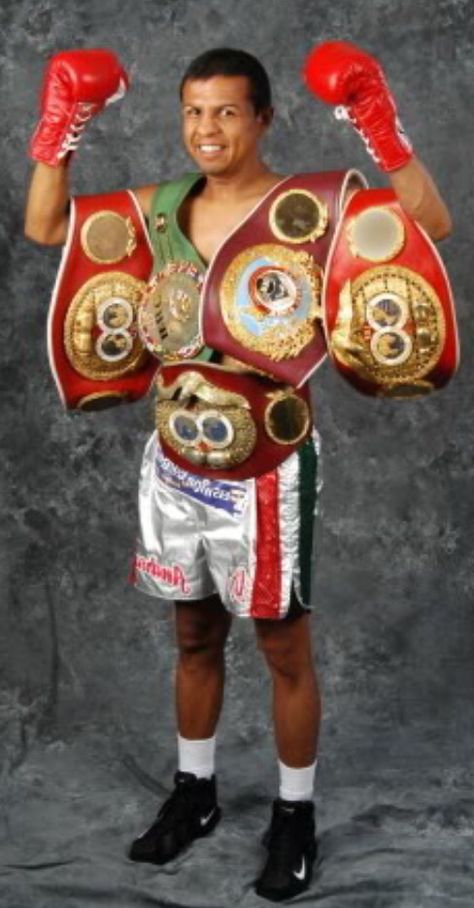 Medina would not take no for an answer. In July 2003, his awkward style of moving and flicking out a steady jab befuddled WBO titleholder Scott Harrison. The Scotsman was unable to figure out the puzzle and dropped a 12-round split decision that should have been unanimous.

It was Medina’s fifth championship and, according to the man himself, his proudest moment in boxing.

The win also allowed Medina to join the great Sugar Ray Robinson as the only fighter to win five world titles in the same division. He claims his motivation to continually overcome the odds came from his family.

A fully focussed Harrison regained his title in a direct rematch, overwhelming Medina in the penultimate round.

The grizzled veteran moved up to 130 pounds and lost his final title fight to Cassius Baloyi in South Africa. He would bring down the curtain down on his remarkable 23-year career in 2008 following a second-round stoppage to Malcolm Klassen.

The 46-year-old now lives in Tijuana and has three daughters; Andrea, Elizabeth and Valentina. He still maintains a keen interest in the sport and works with a few fighters. He also works for Imdet, a local track and field, as a groundskeeper.

The criminally underrated former champion graciously took time to speak to RingTV.com about the best he fought in 10 key categories.

BEST JAB
Derrick Gainer: He is taller and I couldn’t reach him. He kept me away and hit with the right [hand] which is the most difficult thing to do.

BEST DEFENSE
Juan Manuel Marquez: I wanted to attack and he defeated me with his counter attack.

FASTEST HANDS
Johnny Tapia: He used many short shots. He was really fast.

FASTEST FEET
Victor Polo: He kept moving all the time. In the end I won, but he was hard to beat because of his movement.

BEST CHIN
Tapia: No matter how hard I hit him, he just laughed and I didn’t hurt him.

SMARTEST
Juan Manuel Marquez: He used strategy over me and that made the fight very difficult.

STRONGEST
Alejandro Gonzalez: “Cobrita” Gonzalez and Moussa Sangare were both hard hitters and my shots didn’t move them. If I had to pick I would say “Cobrita”.

BEST PUNCHER
Gonzalez: He hits hard. I could feel every one of his punches more than the others. (He hit) harder than Marquez and Naseem Hamed.

BEST SKILLS
Marquez: He has been one of the fighters with more resources and he has defeated me.

BEST OVERALL
Marquez: Because he was the most technical. When we got in the ring, I wanted to implement my game plan but he was able to use his game plan better.