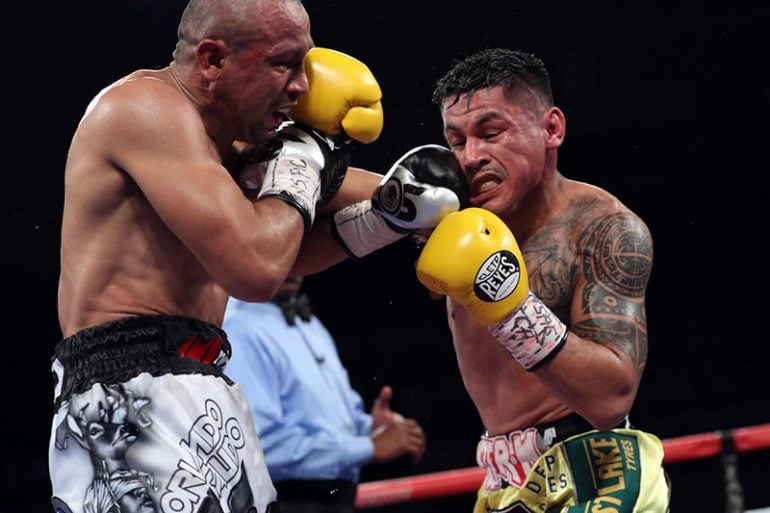 Roman dropped Salido three times — in Rounds 4, 8 and 9 — en route to a ninth-round mercy stoppage by referee Robert Byrd. However, right up until the end came at 1:43 of Round 9, the 37-year-old war horse gave as good as he got in the kind of back-and-forth slugfest that he has become known for.

However, the former featherweight and 130-pound titleholder from Ciudad Obregon, knew that this bout, contested in the junior lightweight division, was his last hurrah.

“The years I have been fighting, all the fights and all the battles, have taken their toll,” Salido said during his post-fight interview on HBO, which televised the fight in the U.S.. “I’ve beaten great prospects many times before, but tonight it was a matter of age, time takes it’s toll. This is my last fight.” 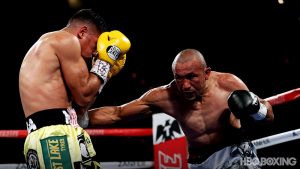 Salido cracks Roman to the body during their slugfest. Photo / @HBOboxing

The modest but enthusiastic crowd inside the Mandalay Bay’s Events Center chanted “Sa-li-do!” during the post-fight interview and as the old warrior left the ring and arena. They chanted his nickname “Siri!” during the early stages of the fight when Salido (44-14, 31 knockouts) wobbled Roman with an overhand right in Round 1 and battered the younger (by five years) but equally experienced man’s body with both hands in Rounds 2 and 3. However, Roman (58-12, 44 KOs) had gone through the best training camp of his career and was prepared to go through Salido’s brand of hell to get the victory.

He served Salido — and the boxing world — notice by dropping his favored opponent with a body shot-hook-cross combination in Round 4.

Salido rallied back every time Roman landed a good shot that hurt him or put him on the canvas — to the delight of the crowd — but “Mickey” would not let up.

“I had to overcome in this fight, it’s my moment,” Roman said. “I’ve had a hard career and often things were against me. If I would have lost tonight, I would have retired. The difference in this fight was that finally had a good training camp in L.A. with (trainer) Rudy Hernandez.

“Things will change for me from today on. I want the champion.” 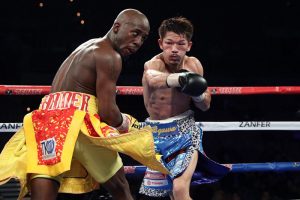 Roman can have his pick of major titleholders — from WBC boss Miguel Berchelt to newly crowned IBF king Kenichi Ogawa, who earned the belt with a hotly contested (and disputed) split decision over Tevin Farmer in the co-featured bout. The only 130-pound titleholder that is off limits, due to boxing politics, is the best junior lightweight on the planet, Vasyl Lomachenko, who defended his WBO belt by dominating Guillermo Rigondeaux on the same night Roman retired Salido (who happens to be the only man to own a pro victory over Lomachenko).

That’s OK. Roman can’t hope to compete with the other-worldly talented Lomachenko, who may have to go to 135 pounds for a suitable challenge, and the fans that are interested in the 32-year-old pressure fighter from Ciudad Juarez want to see him in GOOD FIGHTS.

Much of the boxing media congregated in New York City on Saturday to witness Lomachenko’s showdown with fellow two-time Olympic gold medalist Rigondeaux. Because they were great amateur boxers many fans and media expected a great fight, and many fans loudly celebrated the ESPN-televised bout as a “historic” confrontation for those that appreciate the finer points of boxing.

What they got was a one-sided blowout that did not end in a satisfactory manner.

Meanwhile, some members of the media and a couple thousand “blood-thirsty” fans gathered in Las Vegas to celebrate the Savage Science. They got what they wanted, and it wasn’t just blood and guts. It was just a different kind of boxing craft than Lomachenko and Rigondeaux usually exhibit. 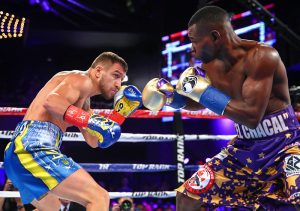 Both boxing art forms are wonderful to behold when done right, and Lomachenko and Rigondeaux are both masters of the craft. But so are Roman and Salido, both of whom are marvels just to have been able to compete at the level they do, with the high-volume-pressure-fighting styles they have, for as long as they have.

Salido has fought too many elite boxers to list in one place, and he’s been in more ring wars than anyone can recall. He’s arguably been in seven or eight Fight-of-the-Year candidates over just the past six years.

Roman has also been in his share of brutal battles. One of them, a 10-round loss to Antonio Escalante in 2010 should have cut his career short and turned him into a journeyman. His Fight-of-the-Year candidate against Takashi Miura, who stopped him in 12 rounds in January, should have done him in.

But here he is. Still fighting and making for great fights.

The torch has been passed.