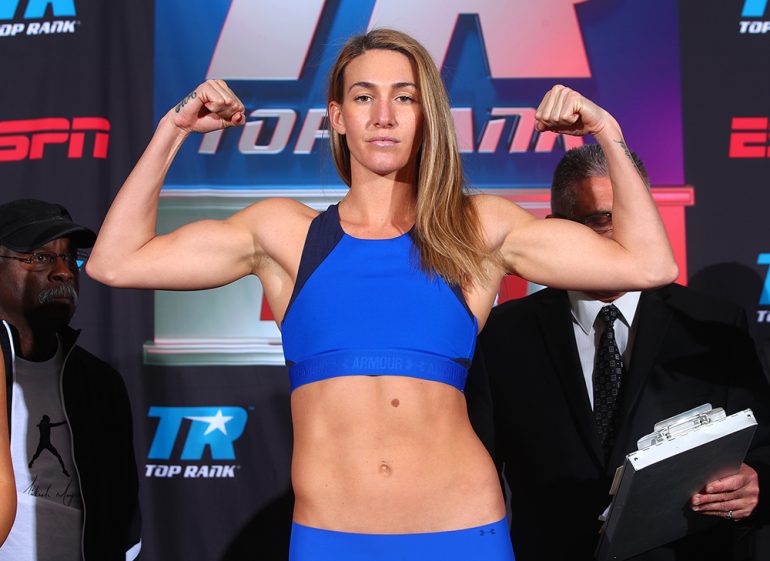 In women’s lightweight action, Mikaela Mayer (3-0, 2 knockouts) defeated Nydia Feliciano (9-9-3) by majority decision on the Vasyl Lomachenko-Guillermo Rigondeaux undercard. The official scores at ringside were 38-38, 40-36 and 40-36.

The Los Angeles native Mayer, who made it to the quarterfinals of the 2016 Olympics as a member of the U.S. team, kept Feliciano at bay with her long jab. The 27-year-old Mayer, who stands 5 feet 9 inches, moved well and kept the New Yorker off-balance, stinging Feliciano with right hands to discourage her from exchanging.

Mayer made her professional debut this past August on the Lomachenko-Marriaga card in Southern California and is trained by Al Mitchell, who was the head boxing coach for the 1996 U.S. men’s squad.

The 21-year-old Jose Gonzalez, who is the first cousin of Roman “Chocolatito” Gonzalez, brilliantly counterpunched Adan Gonzalez but failed to follow up with anything meaningful. Colorado-native Adan, while winning four rounds on judge Don Ackerman’s card, had no answer for Jose’s straight left hand, which found an easy target whenever he chose to throw it.