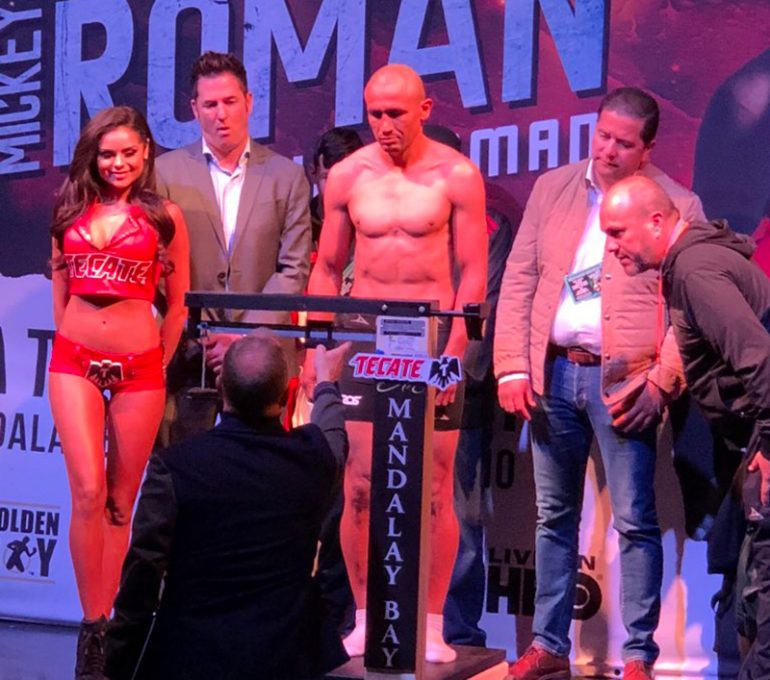 Orlando Salido has yet to meet a scale that he liked, but the two-division titleholder eventually made weight for his showdown with fellow veteran Miguel Roman. Photo / @GoldenBoyBoxing
08
Dec
by Doug Fischer

LAS VEGAS – Orlando Salido is known for his many ring battles, but sometimes his fight is with the scale. On Friday, the former multi-featherweight and junior lightweight beltholder had to strip down twice to make the contracted 131 pounds for his none-title fight with fellow Mexican veteran Miguel “Mickey” Roman.

Salido (44-13, 31 knockouts), of Ciudad Obregon, Mexico, weighed in at 132 pounds on his first attempt at the public weigh-in inside the Mandalay Bay resort and casino, where he headlines an HBO-televised tripleheader on Saturday. The 21-year veteran stripped down and weighed half a pound lighter on his second attempt, but maintained that he was at the contracted weight. Members of his team, including Sean Gibbons, believed the old weighted scale used in the public weigh-in was off.

According to Nevada State Athletic Commission rules, a fighter who misses the contracted weight by a small margin has one hour to make it. Salido didn’t need to sweat anything off. Twenty minutes after the official weigh-in ended, he stepped on a digital scale (nude) in the media center with NSAC Executive Director Bob Bennett present and made weight.

The fighters in the co-featured bout of the HBO Boxing After Dark tripleheader, Kenichi Ogawa and Tevin Farmer, had no problem making weight for their vacant IBF junior lightweight title bout. Both men looked ripped and ready weighing in at 129.5 pounds. Farmer (25-4, 5 KOs), of Philadelphia, engaged in an intense staredown with Ogawa (22-1, 17 KOs), of Tokyo, after their weigh-in.

Former WBC super featherweight titleholder Francisco Vargas looked good weighing in at the division limit of 130 pounds for his scheduled 10-round non-title bout with former title challenger Stephen Smith, who also weighed in at 130. Vargas (23-2, 17 KOs), of Mexico City, hasn’t fought since losing his title via 11th-round TKO to Miguel Berchelt in January. Smith (25-3, 15 KOs), of Liverpool, England, is coming off a first round KO of a journeyman opponent in June. He dropped competitive decisions to Jason Sosa and Jose Pedraza in title bouts in 2016.

Touted Tijuana junior middleweight prospect Jaime Munguia and his rugged opponent Paul Valenzuela both weighed in at 157 pounds for their scheduled eight-round bout.

The Shafikov-Alvarado and Munguia-Valenzuela bouts will be shown on tape delay on HBO Latino after the HBO Boxing After Dark broadcast.