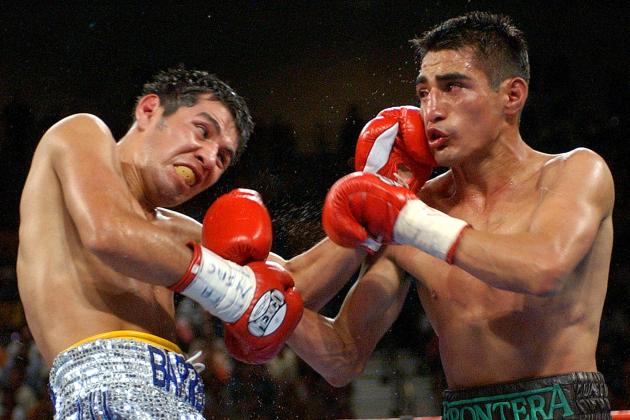 The International Boxing Hall of Fame and Museum announced its Class of 2018 on Tuesday.

Klitschko more than lived up to his nickname of “Dr. Ironfist” as he scored 41 knockouts along with his 45-2 record and began his career with 27 consecutive KO victories. His initial WBO title reign was cut short in April 2000 when a shoulder injury forced him to retire on the stool after nine rounds against Chris Byrd, a fight he was winning handily on the scorecards (88-83 twice, 89-82).

Five fights later Klitschko, as a late substitute for Kirk Johnson, gave lineal heavyweight champion Lennox Lewis six rounds of hell before horrific cuts over the left eye and left cheek forced the fight to be stopped over Klitschko’s vehement objections. Again, Klitschko was leading 58-56 on all three scorecards at the time the fight was stopped. He would never lose again.

Two fights later he won the WBC belt vacated by Lewis by stopping Corrie Sanders in eight rounds and successfully defended against Danny Williams (KO 8) before a string of injuries forced him not only to thrice cancel his fight with mandatory challenger Hasim Rahman but also to announce his retirement. Thanks to his “champion-in-recess” designation by the WBC, the 37-year-old Klitschko was able to immediately challenge then-titlist Samuel Peter despite being retired nearly four years.

Even more stunningly, he battered the Nigerian power puncher into an eighth-round corner retirement, then proceeded to notch nine successful defenses over the next 46 months before calling it quits for good in December 2013, 15 months after stopping Manuel Charr in four rounds. Klitschko turned to politics after his retirement, and just seven months into it he was elected mayor of Kiev in Ukraine an office he still holds.

“It’s a dream of many boxers to be a member of the Hall of Fame family,” Klitschko said. “I’ve thought about the Hall of Fame but I never expected one day that I would be among the legends who were always examples for me such as Muhammad Ali, Mike Tyson and so many world famous boxers. It’s a big honor for me.” 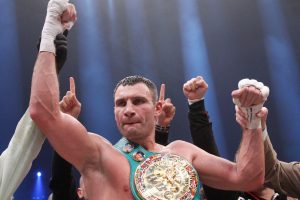 Morales is universally regarded as one of the greatest fighters boxing-rich Mexico has ever produced.

In his 19-year pro career he amassed a record of 52-9 with 36 knockouts and the bullet points of his resume made him a shoo-in first-ballot enshrinee: Major titles in four weight classes (super bantamweight, featherweight, super featherweight and super lightweight), a 17-1 start in what would become an 18-5 (11) record in major title fights and victories over the likes of Daniel Zaragoza (KO 11), Junior Jones (KO 4), Wayne McCullough (W 12), Marco Antonio Barrera (W 12 in fight one), Manny Pacquiao (W 12 in fight one), Kevin Kelley (KO 7), Guty Espadas Jr. (W 12 and KO 3), In-Jin Chi (W 12), Paulie Ayala (W 12), Jesus Chavez (W 12) and Carlos Hernandez (W 12) among others.

He won his first title from Zaragoza just five days after turning 21 and remained a presence at world level until his final fight (a rematch against Danny Garcia) at 36.

Morales had the height and ring smarts to be a skilled boxer — his superlative jab enabled him to beat Pacquiao in their first meeting — but his warrior’s attitude drove him to engage in incredible slugfests such as the first and third fights against Barrera and to summon terrific late-career performances against a prime Marcos Maidana (a majority decision loss that some say Morales could have won despite a horribly swollen eye) and an unbeaten Pablo Cesar Cano (KO 10) to win his fourth title 16 days after turning 35. If ever there was a lock for the Class of 2018 among first-year eligibles, it was Morales.

“It’s an honor to be elected into the Hall of Fame and recognized for my achievements,” Morales said. “I’m overwhelmed by the news. It is a dream come true to be part of the Hall of fame and I can’t wait until next June to be in Canastota.”

For much of his career, Wright was the fighter the big names avoided. And why not: He had speed, he had skill and he had brain power but he lacked the necessary magnetism to generate enough big dollars for the A-listers to justify the risk of fighting him. After losing his first title chance against WBA super welterweight titlist Julio Cesar Vazquez in August 1994, Wright won his first belt 10 fights later when he beat Bronco McKart by split decision to earn the WBO belt, a strap he defended three times against Ensley Bingham (W 12), Steve Foster (KO 6) and Adrian Dodson (KO 6) before losing it in August 1998 on a majority decision to Harry Simon in South Africa.

Following a disputed majority decision loss to Fernando Vargas for “El Feroz’s” IBF super welterweight title in December 1999, Wright became a 154-pound champion for the second time by decisioning Robert Frazier in October 2001 for the vacant IBF strap. After disposing of Jason Papillion (KO 5), McKart (DQ 8 in their third meeting), J.C. Candelo (W 12) and Angel Hernandez (W 12), the opening Wright had long hungered for arrived thanks to WBA/WBC counterpart Shane Mosley, who chose to fight Wright on the heels of his huge majority decision over Oscar de la Hoya in their rematch and with a potential $10 million payday against Felix Trinidad in the offing. Wright took full advantage of the opportunity as he scored a unanimous decision in March 2004 to become a three-belt titleholder, then consolidated his triumph by beating Mosley again eight months later, this time by majority decision.

With his superiority at 154 confirmed, and with his star shining at its brightest, Wright vacated his belts and fought Trinidad in a WBC middleweight title eliminator in May 2005. Trinidad had looked sensational in his comeback fight against Ricardo Mayorga and more than a few observers thought he could produce the same form against Wright. Instead, Wright’s masterful right jab thoroughly nullified Trinidad’s lethal left hook, a dynamic that resulted in a stunningly dominant 12-round decision victory for Wright.

Wright earned a crack at Jermain Taylor’s WBC and WBO middleweight straps following a difficult 12-round win over the unorthodox volume-punching Australian Sam Soliman, and more than a few observers believed he deserved better than a draw against the man known as “Bad Intentions.” Nearly six months later, Wright notched what would be his final victory, a wide point wins over Ike Quartey in 2006. 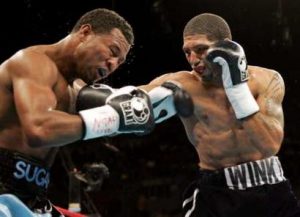 “Wow, it’s great,” Wright said upon hearing of his induction. “It’s an honor. I love my fans and I’m grateful that my accomplishments in boxing are being honored. It feels so great to be in the Hall of Fame.”

Both Albert and Gray were honored for their years at Showtime, the former as a blow-by-blow man for more than 300 championship fights during a 45-year broadcasting career and the latter as a roving reporter and interviewer.

“It’s an honor; I didn’t expect this,” Albert said. “I heard from some boxing friends that I was on the ballot but having been out of the sport for a few years I didn’t expect it to happen. It is quite an honor and I appreciate the call very much. It’s a little overwhelming. I’ve never been to Canastota and I’ve heard so many great things about that weekend through other friends who have been inducted and I look forward to it. It’s rare for me, but I’m a little speechless right now.”

Gray was similarly awed by the announcement.

“I got chills,” he said. I’m so honored and so grateful to the sport, the fighters and the Hall of Fame. What an amazing feeling to have this unique recognition. It’s just an amazing feeling to have been able to have observed and witnessed the excellence of so many incredible athletes.To have been able to have played a part in being able to interview them and bring it to the public is an incredible feeling.”

Kohl, the BWAA’s Manager of the Year in 2002 along with Norman Stone, founded Universum, one of the most prominent and successful promotional companies and his charges include Vitali and Wladimir Klitschko, Felix Sturm, Dariusz Michalczewski, Artur Grigorian, Juan Carlos Gomez, Zsolt Erdei, Sergiy Dzinziruk and Ruslan Chagaev.

Chargin, who was married to 2001 inductee Don Chargin for 49 years, was the detail person while her husband was the visionary matchmaker. Together, along with another husband-and-wife team in Cal and Aileen Eaton, they made the Olympic Auditorium the place to be for two decades. When they left the Olympic in the early 1980s, she and Don formed Don Chargin Productions and the pairing continued until she died of cancer in April 2010. They were viewed as such an inseparable unit that many believe they should have been inducted into the IBHOF together. Today’s announcement completed the circle.

“Oh great! This news has made my day,” Chargin said. “I’m just so happy. I’ve been wishing and praying for this. For her to be the only woman besides Aileen Eaton in the Hall, on many fronts it’s a great honor. I’m really at a loss for words. I’ve dreamt of this.”

Addie was the ring announcer at Madison Square Garden from 1948 until October 29, 1971, when he introduced George Foreman and Luis Pires less than two months before his death from a blood infection. Although he worked as a stock broker on Wall Street and was a singer on the side, he is best known for his work at MSG. He was regarded for his resonant tenor, his tuxedo and polished black shoes and his oft repeated request that “the better contestant emerge victorious.” According to his obituary in the New York Times, the unflappable Addie had a novel solution when, just before a major fight, the public address system failed to play the national anthem: He grabbed the microphone and sang it himself.

Addie, whose birth name was Addonizio, announced more than 100 championship fights at the Garden and other arenas during an era when title fights were a relative rarity. One of the most celebrated bouts he worked was the first meeting between Joe Frazier and Muhammad Ali in March 1971.

Terris, who amassed a record of 93-13-4 with 12 knockouts during his nine-year career, was known as “The Dancing Master of the East Side” for his extraordinary speed and agility. He won 50 consecutive amateur fights before turning pro in 1922, and two years later his talent was such that a writer from THE RING said “there is no stopping Terris in his quest of the 135-pound laurels. Many are of the opinion that in six or eight more months he will defeat (champion Benny) Leonard.” Leonard, to this point, had been champion for seven years.

The induction weekend will take place June 7-10 in Canastota. Events that will be held throughout the four-day celebration will include a 5K race/fun run, a golf tournament, a boxing card and memorabilia show, the Parade of Champions, celebrity fist castings, ringside lectures, the VIP cocktail reception and, at the Turning Stone Casino in Verona, N.Y., a fight night on Friday and the Banquet of Champions on Saturday. The induction ceremony is scheduled to begin at 2:30 p.m. July 10 on the museum grounds.

Lee Groves is a boxing writer and historian based in Friendly, West Virginia. He is a full member of the BWAA, from which he has won 15 writing awards, including 12 in the last seven years and two first-place awards since 2011. He has been an elector for the International Boxing Hall of Fame since 2001 and is also a writer, researcher and punch-counter for CompuBox, Inc. He is the author of “Tales from the Vault: A Celebration of 100 Boxing Closet Classics (available on Amazon)” and the co-author of the upcoming book “Muhammad Ali: By the Numbers.” To contact Groves, use the email [email protected]