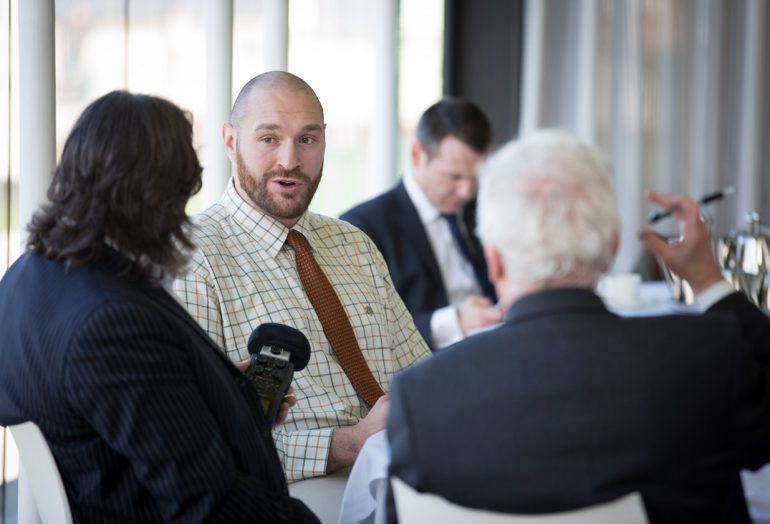 Lineal heavyweight champion Tyson Fury has been out of the ring for almost two years. During that time, he has been accused of failing a February 2015 drug test, admitted to having mental health problems and had his boxing license revoked.

In May of this year, UKAD scheduled a panel hearing to discuss said issues, but it was quickly postponed.

Former world title challenger Hughie Fury, Tyson’s cousin, is also under investigation, but the 23-year-old contender was allowed to continue his career while the case is pending.

Anyway, the latest news is that the UKAD hearing will finally go ahead next month and Hennessy Sports, who represent Fury, have released the following statement in relation to their clients:

On 30 October 2017, Robert Smith of the BBBoC (British Boxing Board of Control) blamed Tyson Fury for delays to his anti-doping hearing. He said to Sky Sports, “We [the BBBoC] are ready to go, UKAD are ready to go on our behalf, and the independent panel are waiting for a confirmed date. It’s up to them [Team Fury] now [to propose a date].”

Then, on 23 November 2017, Mr Smith reiterated to Sky Sports, “The reason why this has taken so long, so I have been led to believe, is because Mr Fury’s legal team could not agree a date for the recommencement of the hearing. They obviously now have, and the hearing will recommence [in December 2017].”

Mr Smith is incorrect. While Team Fury have been advised not to discuss this matter until it is over, we would like to clarify as follows:

(i) This matter started in February 2015 – almost 3 years ago – after routine doping control tests.

(ii) Tyson and Hughie were not notified of the results of those tests for 7 months, and even then UKAD simply asked them about their diet. There was never any suggestion that Tyson and Hughie had done anything wrong or that they might be in any sort of trouble.

(iii) Then, without warning, UKAD charged Tyson and Hughie in June 2016 in relation to the February 2015 tests – i.e. 16 months after the tests.

(iv) A hearing eventually took place in May 2017 but was halted after UKAD objected to the participation of a tribunal member.

(v) Hearing dates were then proposed for early October 2017 but UKAD’s team (not Team Fury’s team) was unavailable.

Contrary to the BBBoC’s suggestion, therefore, the delays have not been caused by Team Fury.

Can’t locate a copy of THE RING Magazine? Try here or
Subscribe