Bob Arum: Look at HBO’s lineup of fights, what is Peter Nelson thinking? 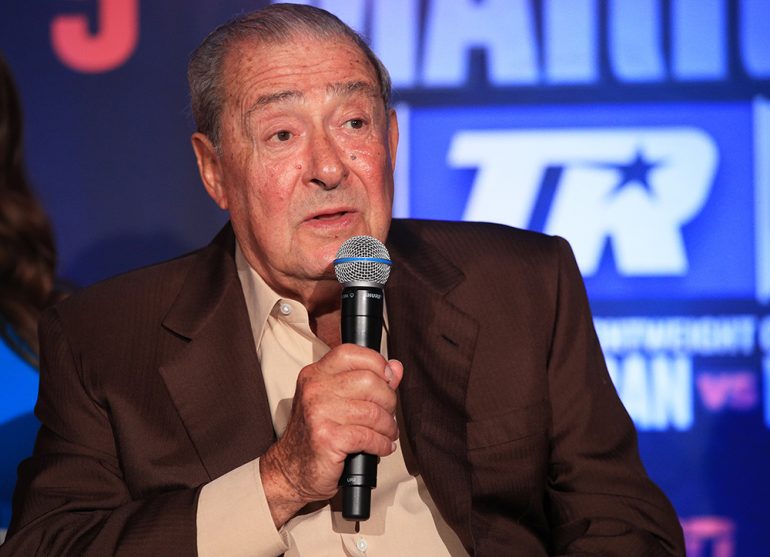 HBO’s 2017 programming has been disappointing when it comes to their non pay-per-view offerings, and now that Bob Arum is no longer in business with the network, he’s not afraid to say so.

A slew of fall fights, with the exception of the excellent Superfly card, haven’t exactly pumped up fans to watch boxing. Arum is puzzled by the slate, and he’s pointing the finger at one man: Peter Nelson.

The Harvard man took the reins as the head of HBO Sports in December 2015, and Arum isn’t too impressed so far.

Arum took Top Rank’s stable of fighters to ESPN this summer, and since it’s an exclusive, long-term deal, they won’t be appearing on HBO any time soon.

And that’s fine with the 85-year-old Hall of Famer.

“Look at his lineup of fights, what is he thinking?” Arum asked RingTV.com. “He has (Sergey) Kovalev against a guy nobody ever heard of (Vyacheslav Shabranskyy) and he has Cotto against a guy Jessie Vargas, who isn’t the biggest puncher in the world, just knocked out (Sadam Ali).

“That’s money they can use to put on really good fights. On December 16, he has an interesting fight (Billy Joe Saunders-David Lemieux), I think that’s a good fight. No one is arguing with that. It’s almost like that was an accident. Hey, we got a good fight. Hey, we made a mistake.”

When reached for comment, HBO Sports Spokesperson Ray Stallone responded: “HBO does not deem the comments worthy of a response.”

Arum’s thinking: If you can’t make a fight that belongs on HBO, “save the mother—-ing money.”

Well, Nelson isn’t. The entire 2017 slate leaves much to be desired. There have been some great fights this year on HBO, but you had to shell out at least $60 to see them. Fights like Canelo-GGG, GGG-Daniel Jacobs, Andre Ward-Sergey Kovalev II and even the first thrilling fight between Roman Gonzalez and Srisaket Sor Rungvisai.

“I just think he’s not competent,” Arum continued. “They need professional people over at HBO. It’s a great network, they have great entertainment, but they have a guy who is running their sports department who has no experience and who is an amateur.

Arum believes HBO could have secured a better opponent for Cotto, like Vargas, if they offered more money. “What kind of fight is that” Arum inquired. “They got a guy who meant nothing and they could pay very little.”

And, of course, the legendary promoter is annoyed — surprised, even — that HBO chose to go head-to-head on December 9 with the highly anticipated meeting between Vasily Lomachenko and Guillermo Rigondeaux.

The first-ever meeting between two-time Olympic gold medalists is a fight years in the making, and it immediately sold out The Theater at Madison Square Garden.

The eyes of the boxing world will be on New York that night, but not HBO’s. They’ll be in Las Vegas for a junior lightweight fight between Orlando Salido and Miguel Roman. Sure, that fight figures to feature non-stop action, but it’s not close to the caliber of Lomachenko-Rigondeaux.

And to oppose the ESPN bout only serves to splinter an already niche audience.

“The guy who’s the head of HBO Sports has really very, very little experience doing it,” Arum expressed. “I’ve had a lot of disagreements, for example, with (Showtime’s) Stephen Espinoza, but I consider him to be a very competent executive. Now, anybody who’s a competent executive, in my opinion, doesn’t waste money on a show like they’re planning to do on December 9 to put it up against a fight that every boxing fan wants to watch.

“Why would you do that? Why in heavens would they do that? What is the reason for it? I can’t figure it out. I look at it as being pathetic.

Unfortunately, that hasn’t been the case if you’re an HBO subscriber in 2017.