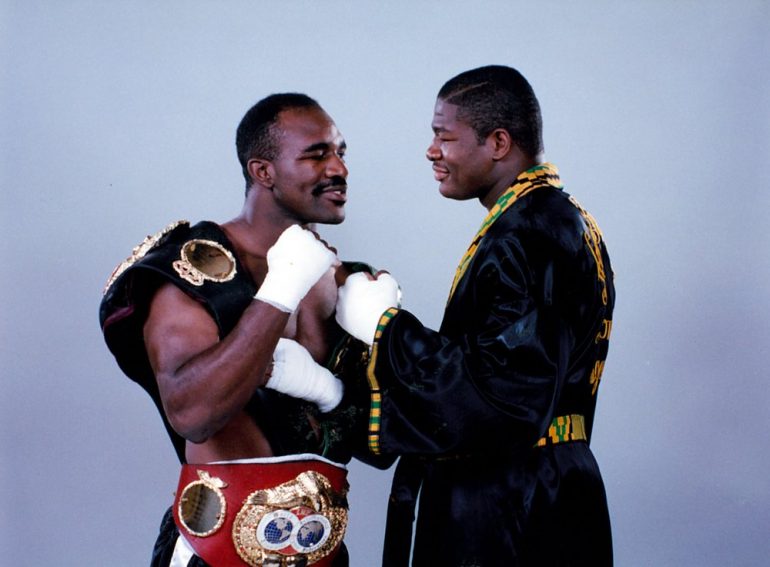 Holyfield (left) and Bowe. Photo from The Ring archive
16
Nov
by Michael Woods

The 25th anniversary of a ring classic came and went the other day, on Nov. 13, and re-acquainting myself with the first Evander Holyfield-Riddick Bowe collision, which entranced and delighted us on Nov. 13, 1992, left me a bit bummed.

Those two; their volume, their snap, their condition, the whole nine . . . it had me sad, because like a past his prime dude, clutching glory day memories because the present-day existence toggles between hum drum and demoralizing, I was longing for the good old days.

Have you not seen the fight? Maybe you have become a boxing fan only recently, or maybe you were three years old when that tango went down. It happened in Las Vegas. Bowe was 31-0, and pundits thought maybe it was a step up too far, from Conroy Nelson, Big Foot Martin and Pierre Coetzer, his last three foes, to Evander.

The Real Deal was on a roll after taking down the same Buster Douglas who shocked the universe by beating Mike Tyson. Title defenses for Evander came against George Foreman, Bert Cooper and Larry Holmes.

Evander was a 7-to-5 favorite against Bowe, lauded for being a “small” heavyweight, for the gargantuan size of his heart and stones, while Bowe got busted on for liking orange soda and being on the boxing writer diet in between fights.

Here’s how Phil Berger for the NY Times wrote about the fight:

“Riddick Bowe, the 25-year-old challenger from Brooklyn, outgunned Evander Holyfield through 12 gritty rounds tonight to win the undisputed world heavyweight title on a unanimous decision at the Thomas and Mack Center.

“Bowe pounded the 30-year-old champion with a display of superior firepower, but Holyfield refused to give in against the bigger and better man.

Every time Bowe unloaded the heavy shots, Holyfield summoned up the courage to push forward and deliver what punches he could. That was especially true in the 10th round, which is destined to be remembered as one of the sport’s greatest.”

Go to YouTube and check out that Round 10, and then send the link to some of these heavyweights today so they can know what they aren’t doing:

On Tuesday, Holyfield came to Everlast in NYC and did the “Talkbox” podcast.

“Me and Bowe yesterday (Monday, Nov. 13) were talking about the first fight,” Evander shared. “And I let him know, you know, you can’t even get your arms up now,” he said, sharing his good-natured jab at the Brooklyn-bred Bowe. “No, (I wasn’t trying to bait him into another fight) I don’t want to fight again. He would love to!”

That first of three fights saw Bowe in fine form. “It was a classic, but I was really disappointed,” said Holyfield. “If you look at the fight, you see where the referee let Bowe hit me on the break. That’s pretty much what happened in that fight.”

Holyfield’s fighting pride is still intact, clearly. His healthy ego summoning reasoning why he lost his first pro outing. Replay shows in Round 11, a left hook buzzed Evander. He tried to clinch some to get his senses back and Bowe kept pressing. You can hear ref Joe Cortez say, “No, holding c’mon,” to Evander, as Bowe kept whacking, and knocked him to the mat, for the second time in his pro career. The ex-fighter/ now promoter said Bowe repeatedly hit on the break and yes, it still irks him.

“I was trying to be the good guy,” the Georgia native told us.

“Maybe we should try and file an appeal now,” I interjected.

Here is how the NY Times’ Gerald Eskenazi handled the write-up of Bowe-Holyfield II, which took place on Nov. 6, 1993, in Las Vegas. 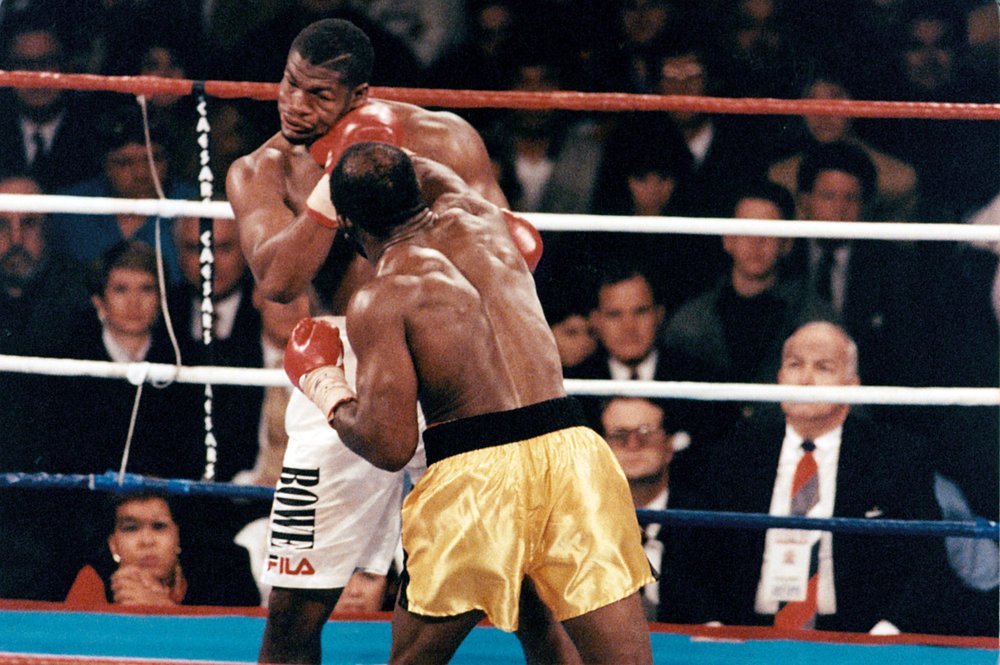 Holyfield cracks Bowe with a right hand in their rematch. Photo: THE RING Archive

“Evander Holyfield survived history, a younger, bigger opponent, and a bizarre delay after a parachutist landed in the ropes in a fight he was dominating, to regain his heavyweight title tonight from Riddick Bowe.

The 31-year-old Holyfield won a majority decision – two of the three judges voted for him, while the third called it a draw – to become only the third fighter to reclaim the heavyweight title from the man who dethroned him.

It came on a cold night in this glitzy neon gambling capital and was punctuated by the startling sight of a parachutist trying to land in the outdoor ring surrounded by a crowd of 15,000. His line got tangled in the canopy lights and he was injured after landing in Bowe’s corner.”

Yes, Evander told us, “We did more fighting after the bell!”

He went on to share a nice lesson for young guns. “Even from that first fight, in losing, I got more credibility, from losing, than I even expected. ‘You don’t want to mess with Holyfield, because it don’t make a difference how hard you hit him, he’s still going to get up and come back!’ Everybody realized then, if he went through all that, he got hit that many times, and he stood up, he can take the shots!”

Attention, young fighters, take those stern challenges, because you can win even if you lose. “You never know how great you are unless you challenge yourself,” he tells the young boxers signed to Real Deal.

It was 25 years ago, he said, and yes, indeed, it does seem like a long time ago, Holyfield admitted. But still, some of those same traits that made him someone who will still be mentioned a hundred years from now, are in evidence. He’s still the “Real Deal” in that way.