Jermell Charlo: ‘The Charlo Brothers are here to take over 2018 and want the fans to enjoy it’ 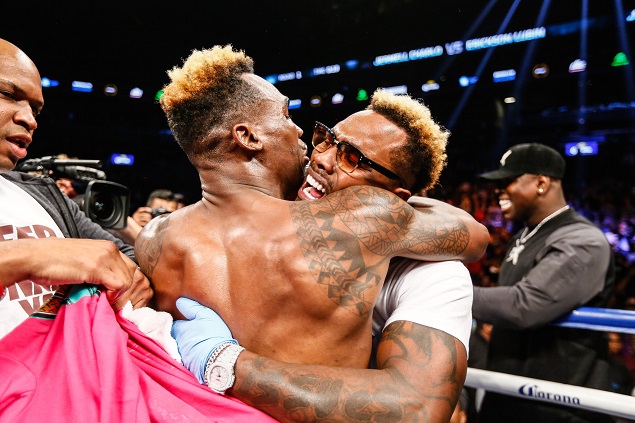 BROOKLYN, New York – Jermell Charlo doesn’t mind putting his hands in the dirt. In fact, he enjoys it. Gratifying afternoons away from the gym are spent with beads of sweat dotting his forehead under a beaming Houston, Texas sun, after moving wheelbarrows full of cement, digging entrenchments and lugging a few hundred pounds of bricks.

It’s Charlo’s way of taking his mind off of things – like what’s ahead.

Jermell built a backyard, complete with installing around 20 pergolas. That’s what the younger Charlo twin did to occupy his time after his magnificent first-round knockout of Erickson Lubin on October 14, at Barclays Center in Brooklyn, New York.

“I love doing that kind of stuff. Maybe that’s where my strength comes from, picking up bricks all day,” surmised Jermell, the WBC junior middleweight titlist, who is one minute younger than his twin brother and former IBF beltholder Jermall, who’s made the move to 160 and is a viable threat to the powers of that division. “Hey, I’m just a normal guy who likes doing normal things. I built a whole backyard (after the Lubin fight) to get away from boxing.

“It was even hard to be here right now (meeting the media prior to the Deontay Wilder-Bermane Stiverne fight on Nov. 4 at Barclays). I’m just being honest. I don’t even want to hear about boxing.”

Whether he likes it or not, boxing is about to hear quite a bit more from Jermell (30-0, 15 knockouts). He’s definitely among the Top 20 pound-for-pound fighters in the world and arguably right there on the edge of the Top 10. His convincing devastation of Lubin, who some may have thought was overstepping his experience level by challenging Jermell, is a 2017 “Knockout of the Year” candidate. RingTV.com has Jermell as the No. 2-ranked 154-pounder in the world behind his buddy, Cuban expatriate southpaw Erislandy Lara.

“I’m ready to box anyone that comes my way,” said Lara, after beating previously unbeaten Terrell Gausha in a mundane 12-round unanimous decision on the same card that featured Jermell’s Lubin knockout. “I’m the best boxer at 154 pounds and I won’t shy away from anyone that wants to fight me. I’ll box whomever; just line them up. I’m not afraid. I have proven that I’m a true champion. I’ll fight (Jermell) Charlo if I have to. We are friends but business is business.”

Jermell didn’t rule out the possibility of a future Jermell Charlo-Lara fight either. But for now, he’s going to continue resting and getting plump.

“Look at me now; look how much I blew up after the Lubin fight,” Jermell joked, playfully pinching a tiny portion of his sides after addressing the media at Barclays. “I want to use this time to relax and take it easy.”

Jermell did admit he felt slighted in the build-up for the Lubin fight. By the attention Lubin was receiving, Jermell wondered if everyone forgot who had a title and who didn’t.

“It’s why I stayed calm throughout the promotion because I believed to myself that Lubin didn’t really deserve the fight,” Jermell said. “It’s why I was going through it during training camp. The pain, the hurt, sucking it all in and wondered why I was putting myself through this and I wasn’t happy with the fight.

“I wondered what the whole deal was about. Who is the champ here? Why is everyone following him? I was like, ‘Damn, am I here to win? Am I here to lose?’ They were following Lubin all around in camp. It was astounding to see how much media he got. When fight week came, there were these videos coming out with Lubin saying this and that.

“I had to defend my region and that’s what I did.”

Jermell also was up front about his unique relationship with his trainer, Derrick James, who also instructs Errol Spence Jr. and is a leading contender for 2017 Trainer of the Year. Jermell and James are in the same age group and they’ve only had about two disagreements in the time that they’ve been working with each other.

“Derrick and I are like brothers, like friends, really,” Jermell said. “Derrick is right around my age. He really doesn’t like my attitude. He’s old-school. He’s about watching my diet and things like that. But he lets me be free away from boxing. Hey, I have a chance to eat and get chunky. We know that boxing is a rough life, with a crazy lifestyle. My brother and I always stay grounded. It’s one thing that Derrick always teaches me, to stay normal.

“Hopefully, Jermall and I will become household names. Maybe then, my brother and I will get the respect we deserve. We’re really good guys. We had a rough upbringing but we support each other. We were doubted. We’re still doubted, I feel. I think we barely get the amount of respect we deserve now. Come down to Houston; give us one of those ‘All-Access’ shows.