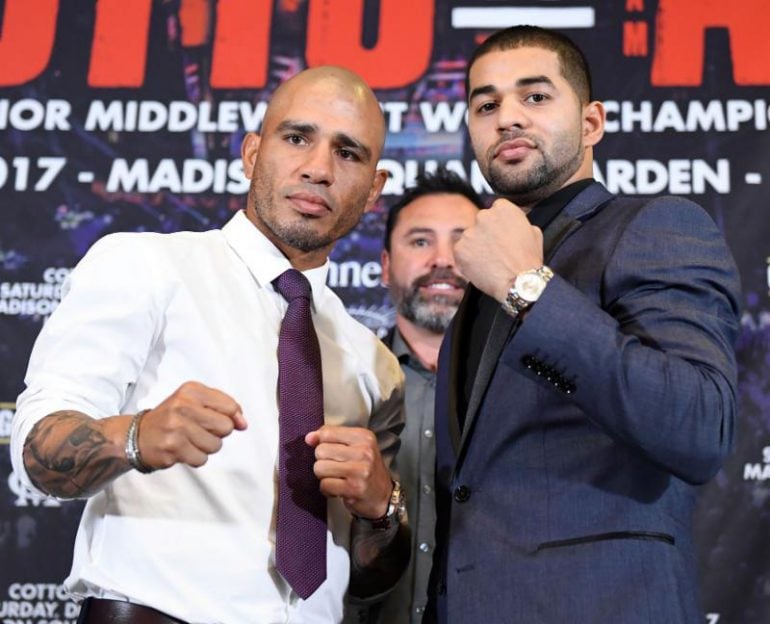 Sadam Ali is in as tough as he’s ever been, on paper, when he gloves up against Miguel Cotto, the Puerto Rican legend looking to get out of the ring on a high note, by beating Ali in his farewell fight, Dec. 2 in the big room at Madison Square Garden.

Ali is going to campaign at 154 pounds, up from 147, and he can snag the WBO world super welterweight title if he pulls off the upset of the year, by wrecking Cotto’s retirement party.

Ali, age 29, sporting a 25-1 mark, is trained by Andre Rozier. The tutor was in Manhattan on Thursday, present for a press conference hyping a battle between his top client, Daniel Jacobs, and Luis Arias. (They clash on HBO Saturday night, the show kicks off at 10:00 p.m.

I asked Rozier how high the hurdle is for Ali…

“Sadam Ali is one of the purest talents in boxing, when it comes to boxing,” Rozier said. “And if anyone thinks Sadam is going to be sitting there waiting to get hit from right hands and left hooks from Cotto, I’ve got a bridge to sell them!

“Sadam is going to use his speed and his mobility to frustrate and keep Miguel off balance. And we’re going to do what’s necessary to be victorious.”

OK, so is he guaranteeing a win?

“I can tell you that we are coming in to definitely win,” Rozier said. “Politics might play a part, we gonna go 12 rounds, will we get the decision? We don’t know. How to remove politics from the equation? We look for the knockout. But knockouts come when you work, not when you look for them.”