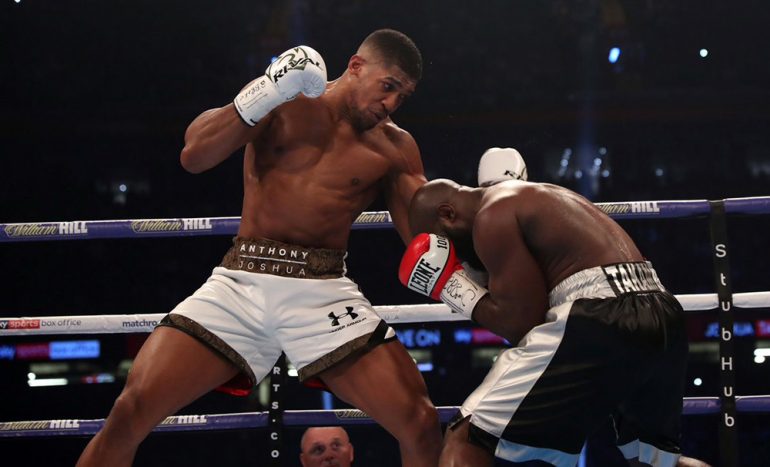 It didn’t come as easy as expected, but Anthony Joshua maintained his perfect knockout percentage.

The IBF/WBA heavyweight titleholder dropped late replacement Carlos Takam in Round 4 on Saturday in Cardiff, Wales, opened up nasty gashes over both eyes and then stopped the Frenchman on his feet in Round 10. Takam absorbed a series of cracking blows shortly before the finish, but it seemed like a premature call from referee Phil Edwards at 1:34. 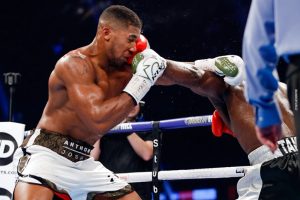 Takam was clear-eyed and fighting well — he won Rounds 7 and 9 on RingTV.com’s unofficial scorecard — and deserved the opportunity to continue. Instead, Joshua’s IBF mandatory is fulfilled, and talk can turn to far bigger fights in 2018.

“I have no interest in what’s going on with the official, that’s not my job,” said Joshua (20-0, 20 knockouts), who was fighting for the fifth consecutive occasion on Showtime. “I was watching him, I was trying to break him down round by round and unfortunately the ref stopped it.

“I think people wanted to see Takam unconscious on the floor, am I right? That’s where I was trying to get to. I didn’t have control over the ref’s decision. Now, we’re on to a positive 2018.”

A sold-out crowd of 78,000 packed Principality Stadium to watch boxing’s biggest star defend his heavyweight crown for the third time. In Joshua’s first fight on the heels of his breakout performance — an 11th-round stoppage of Wladimir Klitschko in a heavyweight classic — Joshua once again showed off his impressive tools, and once more was forced to fight through some adversity.

A head butt busted up Joshua’s nose in Round 2 — the Brit claimed it was broken and that he would soon have it cracked back into place — after he rose off the canvas to stop Klitschko in April.

Takam fought gamely, with blood smeared across both eyes, the vision in his right eye clearly compromised. The 2004 Olympian was called on for the assignment after original mandatory challenger Kubrat Pulev withdrew with a shoulder injury two weeks ago and proved ready for the challenge. 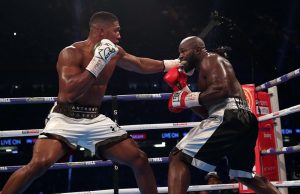 The 36-year-old never threatened to take control of the bout, though. He simply boxed at a foolish distance — right at the end of Joshua’s long jab and tremendous reach — for most of the fight. When Takam, 235 1/2 pounds, did plow forward and combat the champ on the inside, he found some success, but he was only effective in spurts.

“He started catching up in the later rounds, it would have been a massive disaster,” said Joshua, who figured he will need a few months to recover from the nose injury. “I had to keep my cool. I just kept my composure and continued to fight as anyone would do.”

With Takam out of the way, Joshua now hopes for perhaps the biggest matchup that can be formalized in the sport: a unification with fellow crushing puncher Deontay Wilder.

The Alabama native rematches Bermane Stiverne next week, and if all goes according to plan, they’ll square off at some point next year. “It has to happen for sure,” Joshua said. That’s provided Joshua doesn’t jump ship to HBO, the network that has heavily courted the global star.

“Deontay Wilder, he talks a lot, he’s not really fighting anybody, Deontay Wilder against Anthony Joshua has to happen,” said Joshua’s promoter, Eddie Hearn. “There’s also a great fighter named Tyson Fury, he needs to come back. (Joshua) will give you the fights that you want, I promise you that. Deontay Wilder, Tyson Fury, Joseph Parker, those are the 2018 fights.

“Deontay Wilder will be relieved of that belt in 2018 by Anthony Joshua.” 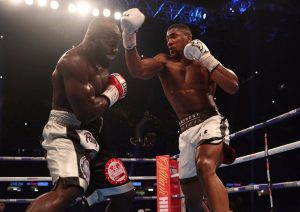 Joshua takes it to Takam late in the fight. Photo / @MatchroomBoxing

Takam (35-4-1, 27 KOs) forced Joshua to reach Round 10 for just the second time, a good learning experience for the 28-year-old. But again, it appeared he had stamina issues. From Round 7 on, the 254-pounder’s mouth was agape as his output dropped tremendously.

He attempted to land short uppercuts on the inside when Takam overextended himself, but outside of Round 4 and Round 10 the power shots weren’t connecting flush with consistency.

Takam entered the bout 0-2-1 in notable fights (KO loss to Alexander Povetkin, decision defeat to Joseph Parker, draw with Mike Perez on HBO). But even in defeat, Takam has proven to be a reliable gatekeeper who can test and give rounds to top heavyweights.

He did nothing but enhance his stature in defeat. And Joshua moves on to what should be a massive 2018.

“I can’t fight Joe Blokes forever,” he said, “I have to fight champion fighters.”

If Joshua can continue to score knockouts next year against the type of opponents Hearn outlined for him, he might not be a U.K. star anymore. He’ll be a global icon.