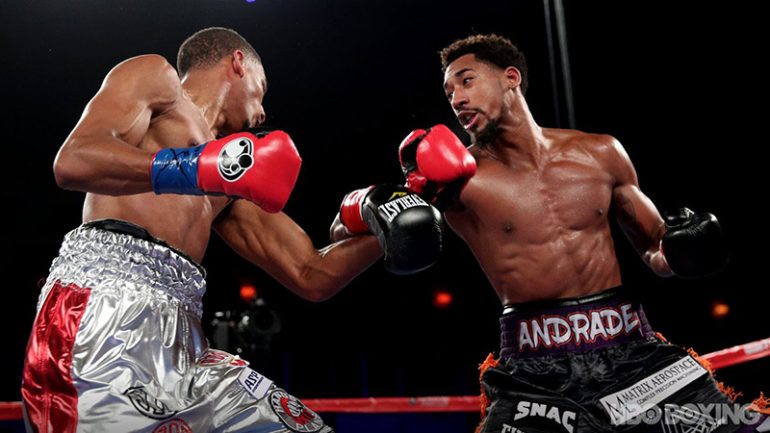 Demetrius Andrade (right) takes it to Alantez Fox en route to a 12-round unanimous decision on October 21, 2017. Photo courtesy of HBO Boxing.
21
Oct
by Doug Fischer

Andrade (25-0, 16 knockouts), a former U.S. amateur star from Providence, Rhode Island, suffered a seventh-round knockdown that was really more of a slip/trip but was in control for most of the HBO-televised fight, starting with a big overhand left that rocked the 6-foot-5 Fox into the ropes in the opening round.

Andrade, who won by scores of 118-109, 118-110 and 116-111, was the busier and more aggressive fighter throughout the bout, repeatedly beating Fox (23-1-1, 11 KOs) to the punch while staking out the center of the ring or while stalking the 25-year-old Maryland-area prospect, who tried his best but simply had no answers for the 2007 world amateur champion and 2008 Olympian.

Andrade, who didn’t look as sharp in his last bout – a split decision over Jack Culcay in Germany in March – didn’t just overcome Fox’s uncommon height and reach (and weight, as the young man put on 20 pounds after Friday’s weigh-in), he also likely knocked off more of the ring rust that he must have accumulated in recent years. He only fought once in 2014, 2015 and 2016.

Andrade definitely looked better against Fox than he did Culcay, but he didn’t set the world on fire with Saturday’s performance. He exhibited what most hardcore fans already knew he possessed – world-class skill and ring generalship – enough to trouble most middleweight contenders. However, he didn’t show the kind of dynamic style and athleticism that would make fans add him to the 160-pound elite, which includes Gennady Golovkin, Canelo Alvarez and Daniel Jacobs.

Perhaps a step up in competition will force Andrade to show more of his talent.